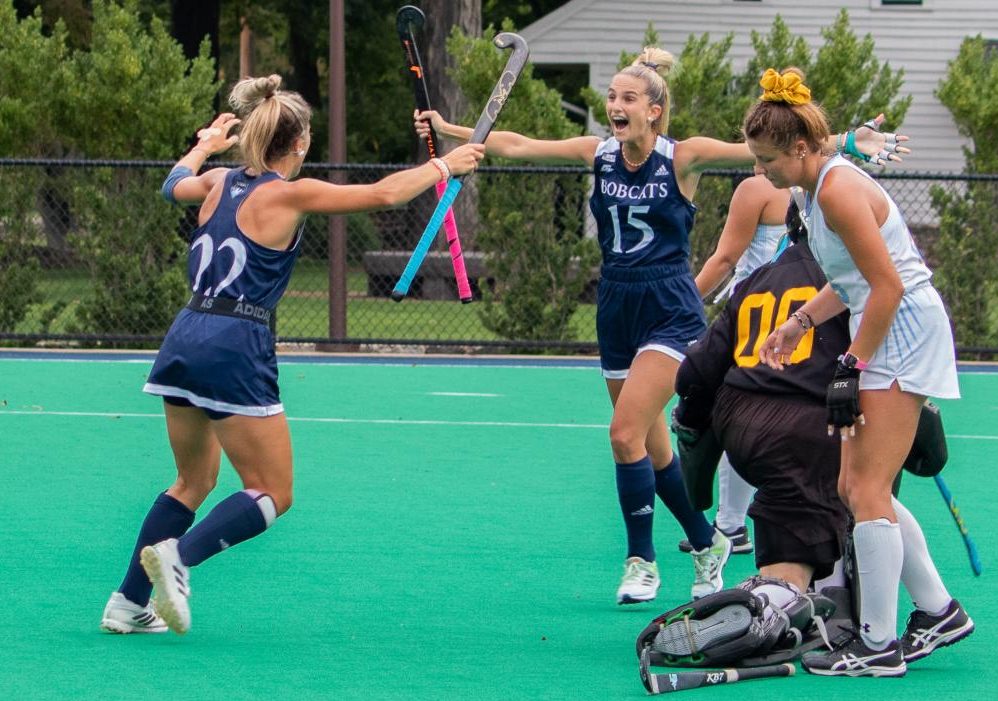 ‘She always stood out’: How Emilia Massarelli’s 5,000 mile journey led her to Big East stardom

The Quinnipiac field hockey team had a tough 2021 season, but they did have one bright spot, and she traveled over 5,000 miles to join the Bobcats: Emilia Massarelli.

5,195 miles is the distance separating Quinnipiac from Massarelli’s hometown of Rosario, Santa Fe, Argentina. It’s not easy to leave everything you’ve ever known behind, let alone having to move to another country. Naturally, the transition to the U.S. came with a lot of learning curves, especially on the field.

“The most difficult thing was to communicate with my teammates,” Massarelli said. “The field hockey words, specifically, I couldn’t understand.”

With the support from her coaches and teammates, along with making new friends, she said that playing field hockey at Quinnipiac began to feel like a second home to her.

“I feel like everyone was very welcoming,” Massarelli said. “They were ready to help me with anything.”

Before Quinnipiac, Massarelli attended Colegio San Bartolomé, located a few blocks from the Paraná River in Rosario. She was a multi-sport athlete, playing tennis, golf, volleyball and field hockey. She was also a member of the Jockey Club de Rosario, a sports and social club based in the city and is one of the wealthiest clubs in Argentina, housing more than 1,500 members.

In her rookie season with the Bobcats, Massarelli was awarded 2nd Team All-Big East honors after she led the team in goals (10) and points (22). She ranked second in the conference in both categories, as well as leading Quinnipiac with four multi-goal games. Out of the Bobcats three victories last year, Massarelli registered two game-winning goals and started in all but two contests as a freshman.

The now-sophomore forward said her favorite thing about field hockey is that unlike the other sports she grew up playing, she gets to play with a team. Her love for the sport grew after watching her mother Pamela on the field.

“My mom used to play (field hockey),” Massarelli said. “She really enjoyed it and she transferred that passion to me.”

Head coach Becca Main is a big proponent of recruiting multi-sport athletes because of their level of fitness and natural ability. Massarelli fit perfectly with this ideal, having played four sports before coming to Quinnipiac. During practice or outside activities with the team, Main noticed how competitive Massarelli was.

“She’s a really good athlete,” Main said. “We don’t have enough of that…It doesn’t matter if we’re playing kickball or handball, she usually wins because she’s played a lot of sports.”

Being a multi-sport phenom gave the Argentine the opportunity to harness her skills. She said she was able to develop different skills from each sport. Her quickness and agility from field hockey, hand-eye coordination from volleyball, discipline from golf and mental toughness from tennis.

Massarelli put her competitive edge and otherworldly athletic ability in effect last season scoring 10 goals in 15 games. This season, she’s only tallied a single goal through five contests, which may cause some to speculate that her performance won’t be repeated. Her former teammate with Jockey Club de Rosario, Josefina Noguerol, believes otherwise.

“She was one of the best players on our team,” Noguerol said. “She scored a lot of goals and had the ability to avoid players in an unbelievable way.”

“She always stood out,” Astore said. “Her play was incredible.”

Massarelli’s lone goal this season was the game winner in the Bobcats’ 1-0 victory over No. 22 Maine, the team’s first victory over a ranked opponent since 2016.

Regardless of her goal-scoring, her play outside of the box score continues to prove valuable. Massarelli creates scoring chances for the Bobcats. Using her slick hands, she is able to consistently dangle through defenders and set up teammates.

Through five games this season, Massarelli’s numbers don’t emulate the success she had last year, however, her contributions remain a key factor in the Bobcats success. And if history is any indication, once she gets going, she can’t be stopped.