Fantasy sports have been extremely popular over the past few years–it’s what gets most of us through QU seminar classes alive. Now it’s time to expand on fantasy sports by incorporating Quinnipiac athletes. 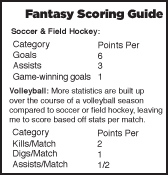 This is the first of three fantasy installments this year. We are focusing strictly on fall sport athletes this edition. All athletes in the top 10 in fantasy points participate in soccer, volleyball and field hockey. Each sport has its own scoring rubric in order to compare each athlete fairly. For instance, a goal in soccer is harder to earn than a kill in volleyball.

The rankings do not place the athlete in order primarily from points earned in 2009; points earned from last year are just a guideline. All factors are used in order to determine the point system, such as games/matches played, games/matches started, new role in the team’s offense, off-season improvement, and the first week of games. Game-winning goals are used as a statistic in soccer and field hockey, rewarding the players who play their best when it matters the most.

Now here are the scoring rubrics and athlete rankings to prepare everyone for draft day. Keep in mind that these are only preseason rankings; any player with top-10 talent could emerge as the top fall fantasy player, so draft carefully!

Furtuna Velaj, women’s soccer: 93 points
2009 stats: 11 goals, 8 assists, 3 game-winning goals
2010 stats: 1 goal, 1 assist
Velaj is hands-down the No. 1 pick. In two years she has scored 26 goals for the Bobcats, and is projected to net 13 in 2010. As the Peyton Manning of Quinnipiac fantasy, Velaj will carry most teams to a fantasy championship.

Jillian Strassner, women’s soccer: 35 points
2009 stats: 4 goals, 3 assists,
2 game-winning goals
2010 stats: 0 goals, 0 assists
Strassner busted on the scene last year, totaling 11 points as a freshman. Many fantasy owners, including myself, have drafted Strassner with the belief that her point total will double in her second year with the Bobcats.
Durval Pereira, men’s soccer: 25 points
2009 stats: 2 goals, 4 assists, 1 game-winning goal
2010 stats: 0 goals, 0 assists
He may not be the go-to guy heading into the season, but many fantasy owners feel that Pereira will thrive while defenses focus mostly on teammate Philip Suprise.

Kim Cunniff, field hockey: 28 points
2009 stats: 4 goals, 1 assist, 1 game-winning goal
2010 stats:  1 goal, 0 assists, 0 game-winning goals
Cunniff has not started her 2010 campaign like most fantasy owners expected, but don’t drop her to the free agent list to quickly. Cunniff, with 13 shots on goal, looks to be one of the Bobcats’ primary scoring options, leaving me to believe she will start racking up fantasy points sooner rather than later.
Kayla Lawler, volleyball: 25 points
2009 stats: 29 matches, 73 kills, 785 assists, 168 digs
2010 stats: 9 matches, 20 kills, 252 assists, 50 digs
If you are looking for a team-first attitude in the first round, look no further than Kayla Lawler. Lawler, with her 785 assists last year, is all about setting up teammates for success. Through nine matches in 2010, Lawler has recorded 252 assists, putting her on pace to reach 812 on the year. Thus, leaving fantasy owners like me to wonder, why on earth did I pass her up?

Katie Van Nostrand, field hockey: 0 points
2009 stats: 4 games started, 0 goals, 0 assists
2010 stats: 2 goals, 1 assist
Van Nostrand is coming off an injury-plagued season, keeping her under the radar for most fantasy owners. However, this high-risk, high-reward draft choice is rewarding fantasy owners so far this season with two goals and an assist in five games.
Kelby Carey, volleyball: 26 points
2009 stats: 29 matches,  317 kills, 17 assists, 277 digs
2010 stats:  9 matches, 59 kills, 5 assists, 99 digs
Carey’s ability to kill and dig allow her to crack the top 10 in this year’s fall fantasy draft. Anyone in the No. 9 spot should be ecstatic to draft Carey. At ninth overall, Carey is the steal of the draft.
Kristin Engelke, field hockey: 15 points
2009 stats: 2 goals, 1 assist
2010 stats: 1 goal  2 assists
Engelke had two goals and an assist in 2009, despite only starting in five games for the Bobcats. Engelke seems poised to explode onto the fantasy scene due to a larger role in the Bobcats’ offense, already registering 11 shots on goal in five games this season.