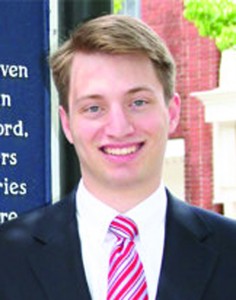 While many students attending Quinnipiac Law School, or any law school,  may hold aspirations to incorporate law and politics into their future, Vitali is leaps and bounds ahead of the curve.

At the ripe age of 25, Vitali, a Wallingford resident, is running for a state Representative spot for the second time in three years. He is running as a Republican candidate, looking to unseat incumbent 85th District state Rep. Mary Mushinsky. Vitali ran in 2008 when he was starting his first year at Quinnipiac Law School, coming up short in his bid for election.

So what is his biggest challenge? For starters, Vitali is running against the longest-serving representative on the Connecticut General Assembly. Mushinsky was elected in 1980, and is presently serving a whopping 15th term in office. Before the previous election, no one had challenged Mushinsky in eight years. Chairman of the Connecticut Republican Party Christopher Healy and other influential party officials asked Vitali to challenge Mushinsky for the spot in the year heading up to the 2008 elections.

“I was a little hesitant, but then I decided to give it a shot and it worked out very well,” Vitali said. “It was an excellent experience and unfortunately I didn’t win, but it gave me the confidence and the desire to try it again this year, and hopefully it turns out differently.”

In Wallingford, Vitali serves on the Republican State Central Committee, which serves as an advisory board to the Republican Party in Connecticut. He has been involved in Wallingford politics since he was 15, and as a 9-year-old was waving signs for family friends running for the state Senate.

“The biggest part of my campaign is going door-to-door,” Vitali said. “I knocked on 2,800 doors when I was running last time and I’m focusing on doing about 4,000 doors this time and really getting out to meet people…and understanding what they think should be done in this state. Jobs, taxes, spending, all those things are the major issues we are facing. I don’t think the people are being listened to in Hartford.”

Although Vitali, if victorious, would represent Connecticut’s 85th District, which only covers a small portion of Wallingford, he would vote on matters which affect the entire state, including the budget deficit and unemployment.

Door-to-door campaigning starts July 1, so Vitali can still focus on his studies for the rest of the school year before switching focus to his political agenda. Vitali described his first campaigning experience as “a little weird” because of the amount of different reactions to his presence at neighborhood doorsteps.

Vitali graduated from Quinnipiac in May 2007 with a bachelor’s degree in political science. After taking a year off from school, he returned to Quinnipiac to study at the law school. Like many politicians, Vitali doesn’t necessarily want to practice as an active lawyer.

“The fundamentals that I’m learning here really span all throughout society and really have given me a grounding in a lot of the issues that are facing the country,” Vitali said. “I’ve taken classes on employment law, retirement security and things like that, which is a major portion [of the problems].”

During his time at QU, Vitali helped found the Quinnipiac College Republicans on campus.