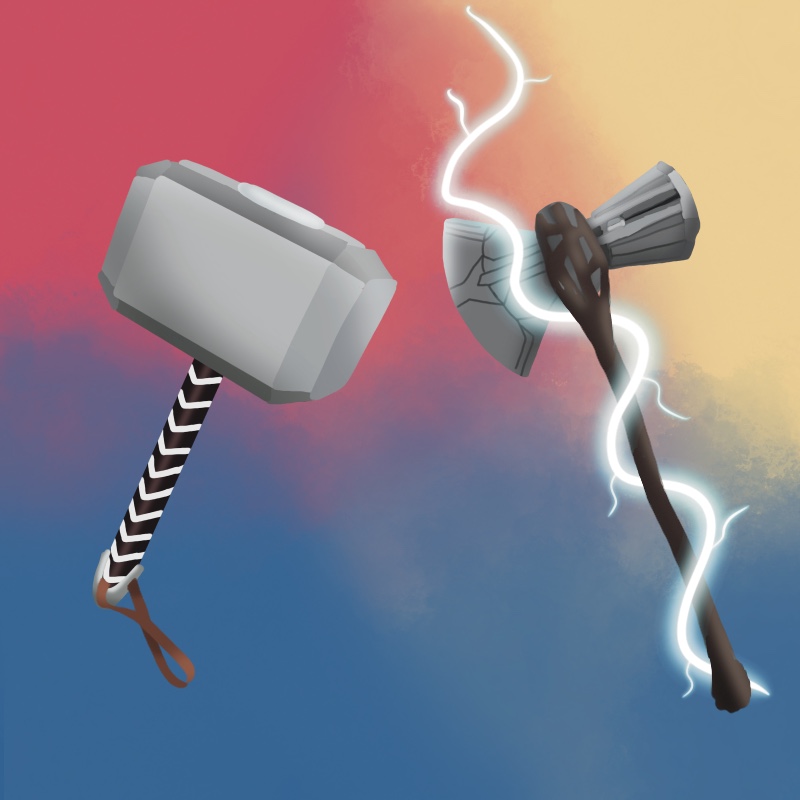 “Thor: Love and Thunder” dropped into theaters July 8, marking a thunderous return for Chris Hemsworth’s titular Norse god. But the love, on the other hand, is largely absent. The film’s absurd pace and seemingly unfinished narrative structure diminish virtually all of the story’s emotional potential.

The comedy, however, has grown exponentially in Marvel’s latest production, which marks the first time any of its main heroes has received a fourth solo outing. The jokes compound upon each other in nearly every scene, many of which are at the expense of Thor’s personality and history. The story skips past all possibility of analyzing his tragic backstory or exploring the psychological toll of what it must be like to live the chaotic lifestyle of an Avenger.

Instead, we are offered screaming goats pulling a chariot, a display of Hemsworth’s rear end and a host of gags, quips and bits of self-aware farce that teeter on the edge of parody.

Taika Waititi returns behind the camera after directing “Thor Ragnarok” in 2017, which had taken advantage of his oddball humor in a way that positively redefined Thor’s persona. His signature style and wit obviously rebound in full force, but their purpose has already been served. To put it simply, the entirety of “Love and Thunder” cannot help but feel like a rehash of a far better film.

But it’s not all a waste of time. The acting is exceptional, as always. Hemsworth embodies Thor on a holistic level, and his comedic timing has improved to such a level where he makes some of the truly poor jokes work quite well. Natalie Portman returns as Jane Foster, Thor’s original love interest, and she brings a surprising amount of charm to her previously muted character. All of the recurring players deliver strong work, rightfully continuing Marvel’s hot streak of consistently engaging performances.

Then there is Christian Bale. Early reviews and rumors celebrated his handling of Gorr the God Butcher, the film’s central villain, and claimed he is one of the best villains in the Marvel Cinematic Universe to date. Bale is very good in the role, as expected, but any potential for subtlety and grace in his small amount of screen time is brushed aside and almost ignored.

Gorr’s backstory marks the opening of the film, which is a smart decision on behalf of the script. The story throws the audience directly into the character’s frame of mind at the lowest point in his life. But the editing of this setup is far too swift, rendering any surprise or genuine sense of heartbreak obsolete. By the time anyone can make sense of Gorr’s basic yet sincere motivation, the film is eight steps ahead, relishing in an absurdly lighthearted action cue with contractually obligated cameos by the Guardians of the Galaxy.

It is easy to discern that “Love and Thunder” is a mess. Character development is weak and almost too basic following Marvel’s comparatively ingenious handling of their initial story roadmap. The action is only okay at best. Punches land hard and fun combos make for some audible engagement from the audience, though little is memorable enough to truly retain the viewer’s attention. The editing is only fast and nothing else, echoing the same chaos and visual frenzy as “Spider-Man: No Way Home” and “Doctor Strange in the Multiverse of Madness.”

By now it feels like a broken record. Each of Marvel’s recent projects is just wash, rinse and repeat. It is always about the next film, the next TV series, the next “thing.” “Marvel Fatigue” is now setting in and it’s here for the long haul. Legitimate discussions about pointless spinoffs and a tireless grind for more content following this film have gotten exhausting, and the cinematic experience surrounding this franchise has devolved into simple talks of anticipation for the studio’s next big box office explosion.

At its best, “Love and Thunder” marks an intriguing point in the livelihood of comic adaptations. It is perfectly average in the majority of its execution and far from memorable on its own. But its existence poses some important questions. Will this cinematic universe of “content” really last the next 20 years? Or will these projects eventually fade into financial obscurity in the same manner as the Western or the Melodrama? Will they actually become dried-up relics of a better time for this once limitless genre? Well, if more projects follow the weak formula Thor’s latest adventure embodies, this may be the beginning of the end for the current titan of the film industry.