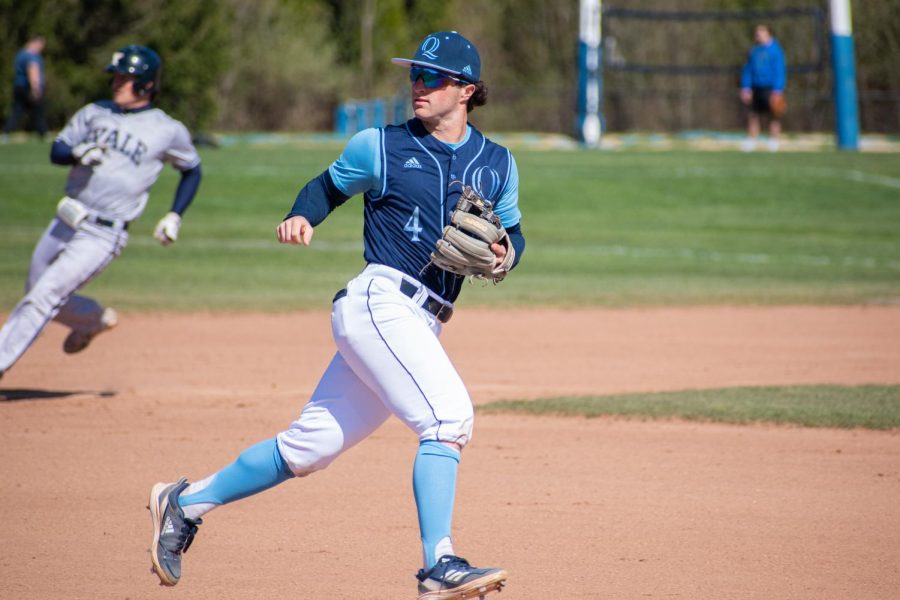 Junior catcher Danny Melnick started the scoring for the Bobcats, hitting a missile over the left field wall to make it 1-0 in the first inning. Melnick has been red hot at the plate as of late, riding an 11-game hitting streak, slashing .512/.577/.953/1.530 with four home runs and nine RBIs in that stretch.

Following tough competition against NC State and James Madison to start the year, Melnick said once MAAC play started, he was able to make adjustments to his swing and approach at the plate.

“Personally, I simplified my approach,” Melnick said. “I tried to stay short with my swing and attack pitches early in the count.”

Melnick did just that Friday, as he attacked a fastball from Jaspers graduate pitcher Will Hesslink early in his at-bat.

“He kind of left the fastball up and I was on time for it,” Melnick said. “I got a good piece on it.”

Junior pitcher Brandyn Garcia was in attack mode for the first three innings, throwing a first-pitch strike to the first nine batters he faced. Garcia struck out four batters in the first three innings and didn’t allow a hit until the third inning when Manhattan graduate outfielder Harrison Treble nailed a single to left field.

The fourth inning is where it all fell apart for Garcia, as he allowed the free pass to four straight. After the Jaspers tied the game, head coach John Delaney shouted out from the dugout, “You gotta get yourself out of this, let’s go now!”

Following another run to score, Garcia regained his composure and got out of the inning.

The Bobcats answered in the bottom half of the inning as the offense strung together a couple of hits. Sophomore designated hitter Keegan O’Connor crushed a double to the left-center gap scoring Melnick. Graduate infielder Ian Ostberg was cut down at the plate after a perfect throw from graduate shortstop David Bermudez and kept the Jaspers ahead 3-2.

After more walks, a wild pitch and effective baserunning by the Jaspers, Garcia’s day was over before he could finish the fifth inning. Garcia finished the game with nine walks, extinguishing his strong start.

“For whatever reason the zone was extremely tight today,” Delaney said. “I think that had a bigger effect on it. I mean not his best outing, he gave up five runs off of one hit. It’s not always the zone, obviously when the zone gets tighter, you put more stress on the kid that he has to pinpoint it down the middle to get a strike.”

The Bobcats rallied in the bottom of the fifth inning. After a bunt single by senior first baseman Michael Kohn and a single to left field by junior infielder McGwire Tuffy, sophomore outfielder Jared Zimbardo was up to bat with a chance to tie it up.

“I was looking to work a good at-bat,” Zimbardo said. “I saw a fastball low and something clicked for me. I was looking for a pitch lower in the zone, it happened to come in the middle and I caught the ball out in front.”

Zimbardo crushed a moonshot to dead center field, tying the game at five. Zimbardo referred to his hit as ‘perfect, perfect’, a nod to MLB The Show.

Quinnipiac didn’t stop there as senior infielder Kyle Maves continued the inning with a single to left field, then stole second base to get into scoring position. Melnick worked a walk after being down in the count 0-2. He finished the day 2-2 with two walks and a home run.

O’Connor stayed hot and hit a single over the reach of a leaping Bermudez, scoring Maves. Melnick was called out at the plate after a dart from Manhattan sophomore left fielder Frankie Marinelli. Despite being cut down at the plate for the second time, the Bobcats took the lead 6-5.

Senior pitcher Gabriel Romano took over on the mound after Garcia and was electric. He pitched three scoreless innings, which allowed the offense to add onto their lead.

Zimbardo crushed an RBI double to left field in the seventh inning and would later score after a wild pitch. The next inning, Zimbardo wasn’t finished, driving in senior outfielder Gianni Arici. Zimbardo finished the day 3-5 with a home run, a double and five RBIs, only a triple away from the cycle. The first five batters in the Bobcats lineup accounted for 12 of their 14 hits with all five having multi-hit games.

The Jaspers wouldn’t go quietly, as they pieced together two runs in the ninth inning, but Romano was able to shut the door and secure the win for the Bobcats.

Quinnipiac is staying at home to finish the series against the Jaspers at 1 p.m. Saturday and Sunday.