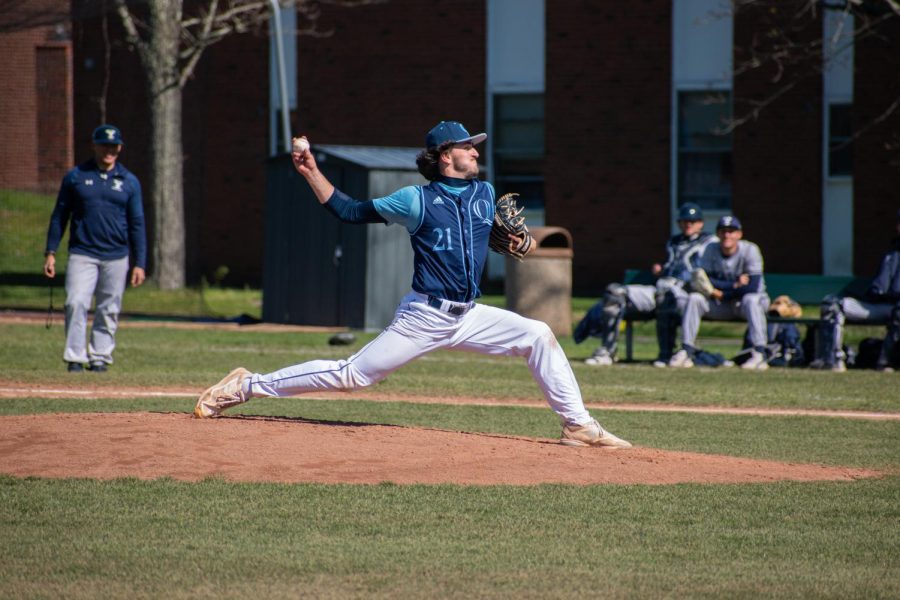 A battery. It’s what powers a household. Some may argue it powers the world, fueling smartphones, computers and a plethora of other gadgets. For the Quinnipiac baseball team, the pitcher-catcher battery is what powers its wins and losses.

The Bobcats pulled off a mini upset within the MAAC and took two out of three games from the Monmouth Hawks, a team that’s currently fifth in the conference compared to Quinnipiac’s eighth. The reason they were able to do it, and the reason they get the majority of their wins, is from strong pitching. In the wins, junior starting pitcher Kevin Seitter and senior starting pitcher Gabriel Romano went a combined 12 innings, leaving the bullpen to only close out six innings.

Even in the one loss against the Hawks, junior pitcher Brandyn Garcia went 6.1 innings with 11 strikeouts, though he did allow five runs. With starters being able to go longer into games, the Bobcats don’t have to rely on their bullpen, by far the team’s weakest point. The bullpen has allowed 178 total runs on the year, compared to Garcia, Seitter and sophomore pitcher Tate Copeland’s combined 118.

But, with all the bad happening in the bullpen throughout the year, blowing leads and walking 169 batters compared to opponents 133, there’s still positives to take away from the latest games. For starters (pun intended), the Bobcats go-to relievers as of late have been Romano, senior Anthony Ambrosino and sophomore Matt DeLuca. The trio have allowed a total of 12 runs in eight outings.

The bullpen shined against Yale on April 20, who they lost to 19-7 earlier in the season. The combination of Mazza, Poiry, Donofrio and senior pitcher Derek Goldrick held the Bulldogs to three runs after a poor five run outing from freshman pitcher Ryan Hutchinson.

Specifically, Poiry has developed a nasty pick-off move. Against Hartford on April 12, and in the second meeting versus Yale on April 20, the former Murray State Racer picked off one runner in each game.

“If you can’t keep guys from getting good jumps on you … you make the game too easy for the other team,” Delaney said.

Poiry allowed five runs and hit three batters the first time he faced Yale, whereas in his second outing he allowed zero runs and one walk. He has improved on his command this season, and with the pick-off move he’s developed, he has the potential to become a No. 1 option out of the bullpen.

Now let’s look at the other side of the battery, the catchers.

Sophomore catcher Keegan O’Connor and junior catcher/outfielder Danny Melnick have been two of the Bobcats offensive cornerstones. O’Connor is batting .297/.364/.432 with 12 extra base hits and 15 RBIs. O’Connor has also improved defensively, not allowing a passed ball since April 2, against Canisius, and throwing a runner out April 20, against Yale.

Melnick is Quinnipiac’s best hitter, slashing .320/.403/.563 with 10 doubles, five home runs and 19 RBIs. He has shifted more into a designated hitter role, only catching when O’Connor needs a rest, and for good reason. Melnick is the lesser defender of the pair, allowing 12 past balls and six errors.

As the season has progressed, O’Connor and Melnick have both developed chemistry with their pitchers and with the fielders around them. O’Connor has not been afraid to backpick to first, and he has started to implement that into his arsenal.

“A lot of our pitchers do a good job, usually hitting the zone,” O’Connor said. “With the breaking balls in the dirt, they have to have full confidence in me to spike it and keep it in front of me.”

This team has the potential to be great. The Bobcats’ offense has been solid throughout the whole season and when the pitchers go deep into games, they’re a competitive team in the MAAC. But they’re incredibly inconsistent.

Nothing demonstrates Quinnipiac’s inconsistency more than this past stretch of games.

Going into the April 22-24 series, Iona was 1-30 overall (1-11 MAAC), one of the worst records in all of Division I baseball. Being on the outside looking in and with the Bob- cats’ recent resurgence in play, it was fair to think this would be a sweep or a series victory. Delaney, however, was cautious with this thinking.

“(Iona) can win any game, it’s zero-zero when you start,” Delaney said. “The approach is no different than any approach in any game. They might have one win, but that’s not the way we look at it.”

The Bobcats dropped the first two games of the series due to excellent Gaels pitching and a stagnant offense. The only offensive action they saw in these games was a home run from sophomore outfielder Jared Zimbardo and a bases-loaded walk from graduate student infielder Ian Ostberg.

Like I said, the pitching has improved and was stellar against Iona, Quinnipiac just couldn’t hit. All bats were going on Sunday when it finally beat Iona 10-6. Donofrio and Melnick both tallied three hits on the day.

The Bobcats have 16 games left, 12 in-conference, so there’s still time to make a push for a higher seed in the MAAC. If they want a winning record, they need to win 14 out of the 16 games.

This team has the potential to be great, only time will tell if they can be consistent enough to embody greatness.