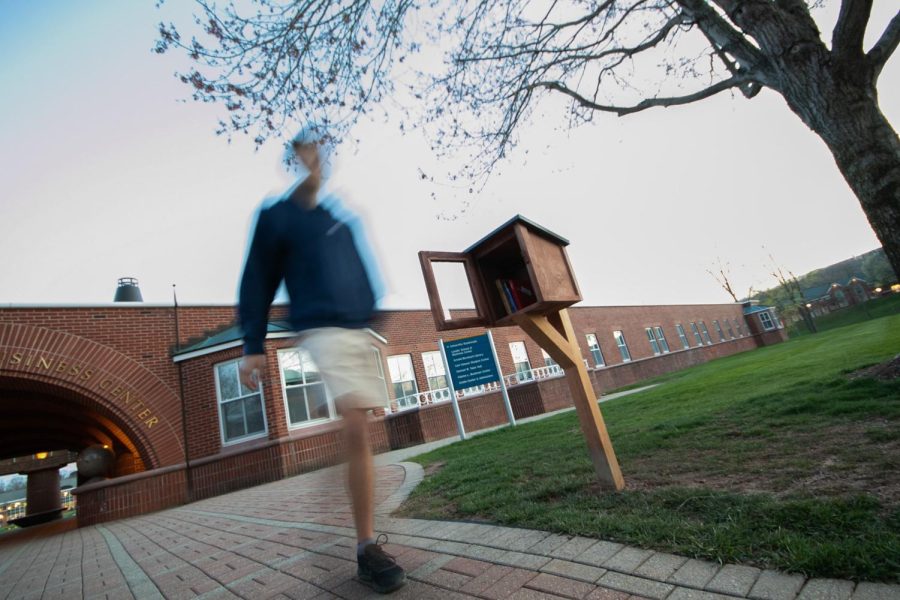 Little Free Libraries is a nonprofit that focuses on "building community" through book exchange.

If you’ve walked around the Mount Carmel campus in the past week, you might have noticed small, wooden boxes suspended on posts. These are Little Free Libraries, a book sharing nonprofit organization brought to campus by former Student Government Association Class of 2024 Senator Morgan Bloom.

The libraries are located next to the School of Business, the Center for Communications and Engineering pond and The Ledges residence hall.

“The whole idea started last spring, where I was just kind of like, textbooks are so expensive and I don’t want to keep going to the library and trying to find knockoff ones online or whatever,” Bloom said. “I was seeing the libraries around my hometown and I thought that those were really cute.”

Bloom said a moment that influenced her idea was when she was taking out her recycling on campus. When she got to the dumpster, she noticed many discarded books.

“I was just kind of like… ‘that’s just a bunch of books in the recycling bin,’” Bloom said. “Sounds like those need a home.”

The nonprofit originated in the Midwest when its founder, Todd Bol, built a small library on his lawn to resemble a one-room schoolhouse as a tribute to his late mother, a teacher. Today, there are more than 125,000 book sharing operations registered with Little Free Libraries.

“Our mission is to be a catalyst for building community, inspiring readers, and expanding book access for all through a global network of volunteer-led Little Free Libraries,” The nonprofit’s mission statement reads.

Patrons of the little libraries can take and leave books as they please, and anyone interested in starting a Little Free Library can buy a kit or finished library online.

Bloom said she liked the concept of “community outreach” through sharing books that the nonprofit provided, so she made a proposal to the SGA executive board. Then, she found faculty members willing to help her with the project from the Arnold Bernhard Library.

“Morgan met with me and my librarian colleague Ronda Kolbin to discuss how the ABL could provide assistance,” Public Services Librarian Robert Young wrote in an email to The Chronicle. “The plan was to set up the LFLs during the fall semester, but unfortunately funding for the project was not available during the fall.”

The initiative was then stalled for two semesters due to a lack of funding. Meanwhile, Bloom said she resigned from SGA in November 2021 due to a time conflict. It wasn’t until she received an email from Young and Kolbin last week that Bloom noticed her initiative had come to fruition.

“I was just kind of caught off guard, and I was like, ‘what do you mean, (the LFLs are) coming up,’” Bloom said.

“(SGA) had leftover money with the 100k that the administration gave them, and they used some of that money to fund (the LFLs),” Bloom said.

Now that the facilities department has installed the LFLs, Bloom said she is excited to start seeing students use them to exchange expensive textbooks as an alternative to buying online or at bookstores.

“I’m hoping that the whole textbook (exchange) thing will work,” Bloom said. “Because, if it doesn’t, it’s not the end of the world. They’ll still be good book exchange things. But I feel like it’d be cool if we had a little textbook exchange going.”

Delnaz Amroliwalla, a sophomore accounting major, had not heard of the initiative, but said that it “sounds like a good idea.” When it comes to buying and selling textbooks, Amroliwalla said that she does her transactions online.

“I think (the LFLs are) just easier to be honest, but if you’re looking to get cash for a textbook, (selling it online is) one way to do it, but if you just want to donate it, that’s what people do, too,” Amroliwalla said.

Hannah White, a sophomore heath sciences and occupational therapy double major, said that she uses LFLs around her hometown frequently.

“I have about six (LFLs) near me at home, and I hope to build my own near my house in the future,” White said. “I pass a few on my way home from school, and I always check them out when I’m in the mood for a new read. I’ve even managed to stumble upon a new favorite book, one that I probably would never have picked up if it wasn’t for the coincidence.”

White expressed that she is excited that the nonprofit is coming to campus, saying that she “can’t wait to watch these libraries grow.”

“I love to read, but with being at school I don’t always have the space for a ton of books,” White said. “I love the idea of being able to give and take books with other readers on campus, and being able to read on my own time rather than fussing with a library deadline, placing holds and managing reading along with general schoolwork.”