Not your neurotypical show 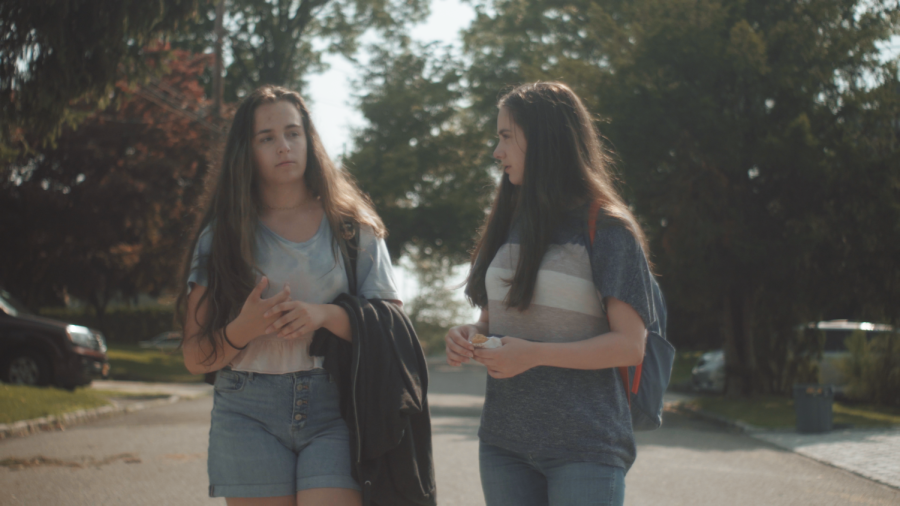 Jack (left), played by Kayleigh Jayne, and her twin sister Sam (right), played by Jessica Hoechstetter, navigate their way through high school together as neurodivergent teenagers in 'What's the Rule?' Photo contributed by

Twin sisters Sam and Jack Schneider are not your standard high school students. They are neurodivergent, which refers to anyone who has a difference in brain functioning to what is considered “typical.” Sam is the older twin with ADHD, and Jack is autistic. Each episode will go over a different rule Jack needs to learn in order to get through the treacherous world of high school.

“A show like this has never existed,” Janoson said. “I tried to write very general characters … but with the characters in ‘What’s The Rule?,’ they are very hyper-specialized.”

The diversity of characters in the show is immense. The sisters are from a Jewish family and one student is nonbinary and uses they/them pronouns. Another student, played by Janoson, is nonverbal. The show takes on several uncomfortable interactions neurodivergent people have to face every day.

Janoson wrote, directed and edited the entire pilot. He is also the founder and head of the production company that produced it, IndEP Media. The company serves as a gateway for more disabled artists to step through the threshold into the media industry. The cast and crew of “What’s The Rule?” was 82% neurodivergent, including Janoson, who has ADHD.

“There are things that I do that make people feel uncomfortable, and they talk to each other about it instead of talking to me directly,” Janoson said. “I think that’s another huge issue … it’s not an excuse, it’s an explanation.”

The group began filming July 6, 2021, and finished 5 days later. After months of editing, Janoson finished the project on March 30. The goal, as stated by Janoson, was to “do what Sia couldn’t.”

Pop artist Sia released a musical drama called “Music” last year about a recovering drug addict being the new legal guardian to an autistic teenage girl, much like Jack in “What’s the Rule?” “Music” was recognized at the Golden Globe Awards for its visually appealing cinematography, but received criticism from media outlets and the neurodivergent community for the crude and false portrayal of autistic people.

“When you don’t have somebody (that is) a part of the community take part in the creative process, then you run the risk of creating something unauthentic,” Janoson said. “There are movies that involve autistic people … but the issue is that they either don’t bring them on until later or they don’t include them in the creative process. It’s not designed for the community, it is made for people to feel good about themselves.”

The episode premiered on YouTube Live, accumulating over 2,500 views within the first four days of release. The surprising popularity may have been in part to TikTok.

With no media budget, Janoson created an account for the show, making exclusive content and promoting the trailer. The initial post with the trailer was viewed nearly 33,000 times and was shared by Ariella Elm, a prominent queer, autistic and Jewish influencer. Elm’s video reached over 172,400 users. It left many eager to follow the production and release of “What’s the Rule?”

During the live stream, the comment section was overwhelmingly positive. User “Mena” wrote, “As an ADHD-Autistic this makes me feel very seen. I can’t wait for the next episode!!!”

Another comment by “De A” read, “This is the greatest representation I have seen for autism and adhd. I want to cry. I feel heard and seen. Thank you.”

After scrolling through comments for days, Janoson said he was proud that something he made can make a difference.

“I didn’t quite know how people were gonna receive it,” Janoson said. “It’s really interesting to see how unique and special people think this world is, even though it’s the world but it’s just adjacent to them.”

University of North Texas student Jessica Hoechstetter, who played the role of Sam, also has ADHD like her character. She said working on this production helped her be more self-reflective. Hoechstetter said she loved the people around her and thought it was a great environment of imaginative people.

“I learned so much about myself,” Hoechstetter said. “It is so much fun. You don’t know any of these people coming into it, but then once you’re all working on the same thing, magic happens.”

Hoechstetter wasn’t too sure how the final product would be received, saying that the script was always in editing and had many spontaneous changes. Nevertheless, the result was beautiful.

The pilot episode titled “School?” is available on YouTube now, and later episodes are planned to be released on Amazon Prime Video.