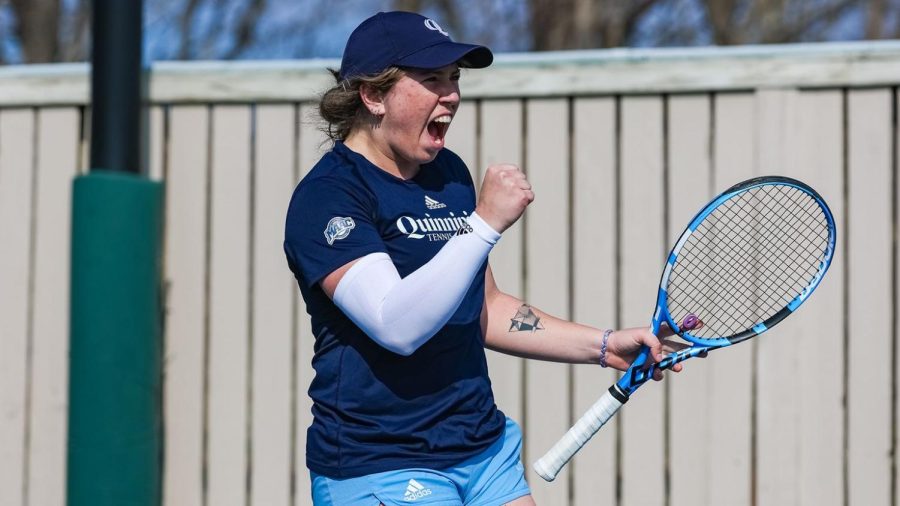 The Quinnipiac women’s tennis team swept Monmouth 7-0 Tuesday afternoon in Guilford. The Bobcats (8-7, 2-0 MAAC) extended their winning streak to six matches and the Hawks (3-10, 0-2 MAAC) lost their seventh straight. The Bobcats have won the last nine matches they have played against the Hawks.

Despite the Bobcats holding a 6-7 record outside of conference play, head coach Paula Miller said she purposely made a challenging schedule so the team will be ready when it’s time for MAAC play.

“We have seven losses because we played some really good teams,” Miller said. “This is to get ready for the MAAC and hopefully, we can win all of our matches.”

The Bobcats snatched the doubles point, winning all three matches. Senior Kamilla Nella and junior Alessia Truden played No. 1 doubles. After taking an early two-game lead, the next three games were split 2-1 in the Hawks favor.

The No. 3 doubles matchup, played by graduate student Dominique Vasile and junior Jordan Bradley for Quinnipiac, went back and forth to the end. The Hawks took a 2-0 lead before the Bobcats tied it 2-2. The two teams would then trade wins until it was 5-5, putting the win-by-two rule in play. The Bobcats won the next two games and won the match 7-5.

Quinnipiac won every singles match. Truden moved up in the lineup to No. 1 singles and won easily 6-0 and 6-1. After winning her matches over the weekend against Niagara at No. 2, Miller said that Truden had proved herself after coming off of an injury. Nella moved down to No. 2 singles and split the first two sets, losing the first 6-4 before winning the next 6-3. The next set was a 10-point tiebreaker which Nella won 10-3.

“Kam did a great job,” Miller said. “It’s not knocking her, she’s been winning at one. I think that what’s best for the team and to win is Lessi at one, Kam at two and Claire  at three gives us a one, two and three win. But then again, it could change the next match so you never know.”

The remaining matches weren’t pushed to a third set. Koscielski (6-1, 6-2) is 10-5 in singles matches on the year and is 6-0 in her last six singles matches. Vasile (6-2, 6-0), Bradley (6-4, 6-1) and Wilbur (6-1, 6-2) all came away with straight set victoires. Wilbur showcased exceptional defense when playing up close to the net as the ball would be hit back and forth never hitting the ground like badminton.

The Bobcats will travel to Lawrenceville, New Jersey, to take on the Rider Broncs (3-4, 0-1 MAAC) on April 7, in their third out of six MAAC matchups to finish out the regular season.