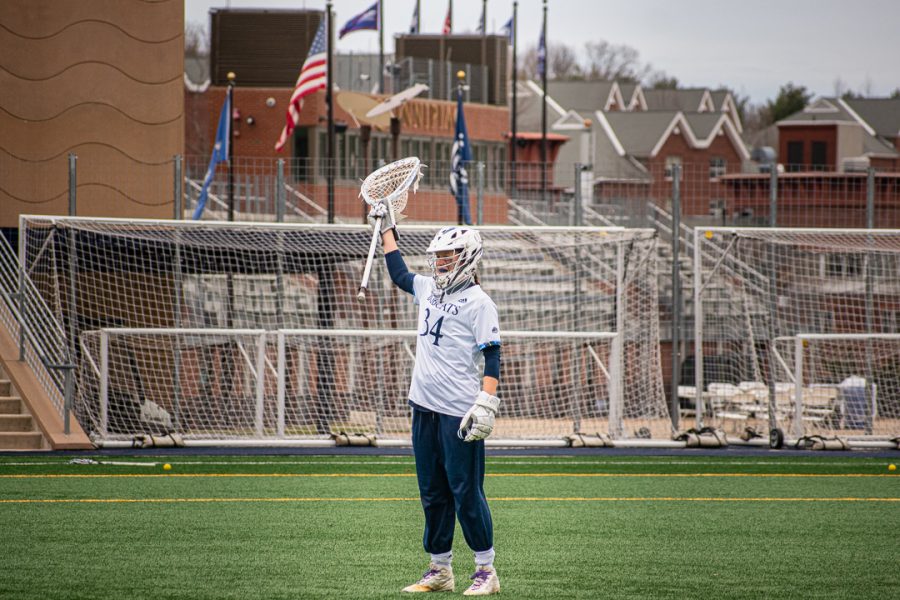 When she showed up to her first day of lacrosse practice, 11-year-old Kat Henselder had finally given in to the bids of her dad, a former lacrosse goalie. But she wasn’t there because of him — she was there because her brother had recently succumbed to the same plea, and like most siblings, Henselder wanted to follow him.

What Henselder found that day was an intrigue for the crease and a lasting desire to experience the adrenaline it had to offer. It was the only place on the field where she could be all alone, doing something no one else on the field could do — protecting her net.

Although Henselder comes from a lacrosse family, it wasn’t her first sport of choice. Growing up, she preferred a basketball to a goalie helmet. Nowadays, the goal is the only place Henselder should be, as her teammate, junior midfielder Sophia Iaccino put it.

“She’s really good at her job as a goalie, but if I put any other sport in front of her, it’s kind of brutal to watch,” Iaccino said, laughing. “We’re getting her better and better at basketball. So that’s a start.”

Iaccino and Henselder have been roommates since last year, and Iaccino described her goalkeeper as quiet but “hilarious.”

“It’s a different side of her that you get to see living with her,” Iaccino said. “She’s studying often, but when she’s not studying, she’s a beast at Fortnite. And she’s always a great person to live with and have by your side.”

When she’s not jumping out of the Battle Bus, facing shots is what Henselder does best. So far this season, Henselder has seen 203 shots, allowing only 106 goals. That puts her at roughly a 48% save percentage, third highest in the MAAC.

The junior health science studies major said her favorite part of playing lacrosse — specifically goalie — is the impact she can have on her team, as well as the “rush of adrenaline” that comes with facing a shot.

Off the field, Henselder’s game preparation doesn’t stop. When she has a frustrating practice or wants to sharpen her reflexes, she turns to juggling to hone her hand-eye coordination. Like Henselder’s introduction to lacrosse, her dad’s hounding sparked her juggling career.

“My dad was like, ‘All the goalies know how to juggle, (you) have to learn it,’” Henselder said. “I was just like, ‘that’s just silly,’ and then I got to eighth or ninth grade and he was like, ‘Everyone else can juggle, and you’re the only goalie that can’t on the team,’ so that was when I sat down to learn.”

When Henselder finally did give in, she discovered that juggling isn’t as hard as she thought — just a five-minute YouTube video and three days. It’s conceivably a testament to Henselder’s “never-settle attitude,” as head coach Tanya Kotowicz described her.

“I think more than anything, her focus has been how to make the unit better,” Kotowicz said. “And it’s only made her own play better, which is awesome.”

Kotowicz said Henselder is the “hub of our defense” and “more talented than she knows.”

“She is the anchor,” Kotowicz said. “(She) just keeps bringing a little bit more every day, so obviously, we rely pretty heavily on her.”

In addition to playing basketball growing up, Henselder ran cross country and winter track in high school between lacrosse seasons. It was also in high school when Henselder decided to play lacrosse at the collegiate level because of her experience with her travel team.

“My team was close knit, and I knew that in college I could get an experience similar with girls that all shared similar passions that would become my family,” Henselder said.

When she underwent her college search, Henselder said she became interested in Quinnipiac after talking with Kotowicz during the recruiting process.

“I really liked how she viewed the team (and) how she was looking to change the program, and I just really wanted to be part of it,” Henselder said.

Despite being in her first normal season as a junior due to the pandemic, Henselder’s close bond with her team has given her an overwhelmingly positive college experience.

“Some people go to college and play sports, and they just hate going to practice every day,” Henselder said. “That’s really the difference here — everyone actually enjoys it. We’re such a close knit team, we’re always together. It’s such a great environment to be in.”