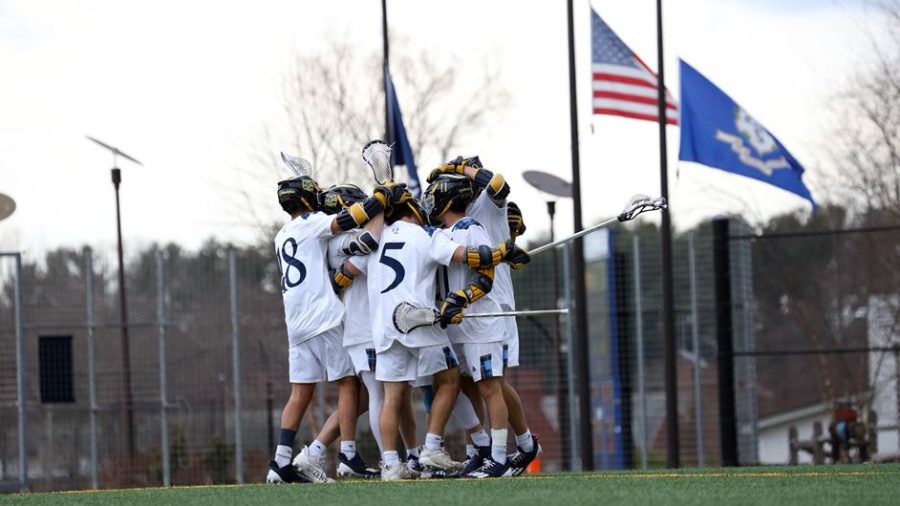 After getting off to a rocky start to the season, the Quinnipiac Bobcats played a high-effort defensive game but ultimately fell to the Monmouth Hawks 9-8 on Saturday.

The Bobcats, who came into the game on a five-game losing skid, limited a Hawks offense that scored 36 times coming into the game in the first quarter. Quinnipiac found some cracks in the armor of Hawks fifth-year goaltender Noah Lode, but still struggled to capitalize on the chances given

At the end of the first period, senior defenseman Will De Palma unleashed an 80-yard shot that bounced just under Lode’s legs, which sent the crowd into a frenzy. The return of lacrosse to Quinnipiac after a six-game road trip was an awesome sight to see, win or lose.

“Great to be back. It’s great being home and it shows,” Quinnipiac head coach Mason Poli said. “It definitely added a boost to the boys.”

While the outcome was not what the home crowd would have hoped, Quinnipiac fans did get to witness the continuation of sophomore midfielder Steven Germain’s breakout season.

Germain had himself a game to remember, scoring goals 13, 14 and 15 on the year. His 15 goals and 21 points lead the team and he provides the Bobcats with an electric ability in all three zones.

Poli said he’s been happy with his star player’s rise from his first to his second year, which has elevated the whole team’s play.

“His ability to run wings, command our offense, getting back in the hole and play defense,” Poli said. “We rely on him a lot to carry the load.”

A gritty goal by junior attackman John DeLucia reclaimed the lead for the Bobcats and for the moment, seemed to be a momentum shift for Quinnipiac. However, Lode stayed strong for the remainder of the game and was lights out in the final two minutes, stifling the Bobcats’ offense.

Monmouth’s attack duo of senior Devin Pipher and junior Connor Macrae combined for five goals in the game, including the game winner by Macrae with four minutes left in regulation. The Bobcats had a strong defensive showing, but the Hawks’ offense was too much toward the end.

Both teams’ high energy was evident throughout, as either squads weren’t afraid to be physical on defense. Referees called multiple penalties on both sides, and the benches exploded on every whistle.

The defeat gives Quinnipiac its sixth straight loss, the longest such streak since the COVID-shortened season back in 2020. While that team from two years ago went winless, they kept games close. That was exactly what the Bobcats have done as of late in 2022. Back-to-back games of holding the opposition under double-digit goals is a nice sign for a team that has a good deal of expectations, which included a No. 4 ranking in the MAAC Preseason Coaches’ Poll, as well as a first-place vote.

“I thought defensively we made them earn everything,” Poli said. “Had some really good stances and forced some violations. Not where we want to be, but everyone should have their head high.”

The Bobcats look to rebound next weekend as the 1-6 Marist Red Foxes trot into Hamden for a 10 a.m. match April 2.