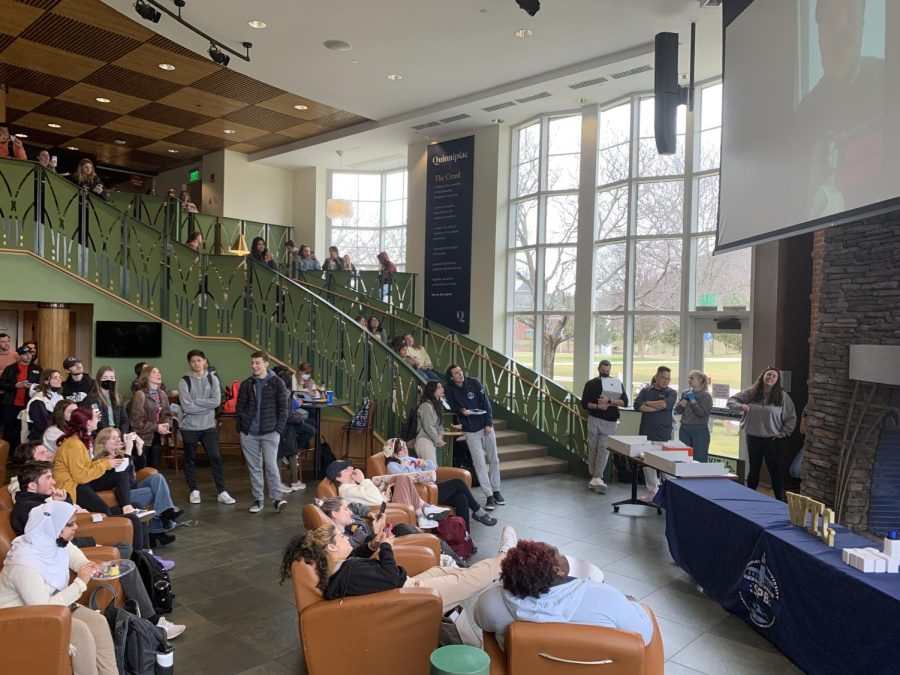 After a crowd of students rushed to grab a slice of chocolate or vanilla cake decorated with blue and yellow icing in the Mount Carmel Piazza, SPB played a video showing that comedian Sal Vulcano, 45, will be the sole performer at their annual Wake the Giant event on April 10.

“We wanted to do something different this year,” said Avery Simonds, a second-year interdisciplinary major and SPB’s culture and conversations chair. “We’ve done a lot of concerts in the past, and I think that Sal is a really great comedian and I’m excited.”

Vulcano is best known for his work on “Impractical Jokers,” a hidden-camera reality show starring The Tenderloins Comedy Troupe. He is also the host of the podcasts Hey Babe! and Taste Buds.

“I’m excited, but not familiar with this artist,” said Brooklyn Mastracchio, a first-year occupational therapy major. “I was hoping it would be a singer and more of a concert, but I don’t mind it being a comedy show just cause they hadn’t in the past. It wasn’t 100% unexpected.”

It has become expected that a musical artist will perform live at Wake the Giant based on previous headliners Khalid in 2018 and blackbear in 2019. Many students were displeased with the change of pace at this year’s event.

“I love Sal and I love ‘Impractical Jokers,’ I’m just frustrated (that) the information that it would not be a concert this year was not relayed as well as SPB hoped,” said Genna Mullen, a third-year medical microbiology and immunology major. “As a junior, I’ve never been to Wake the Giant, and previous headliners have been singers I really enjoy. Now, I was expecting a similar experience.”