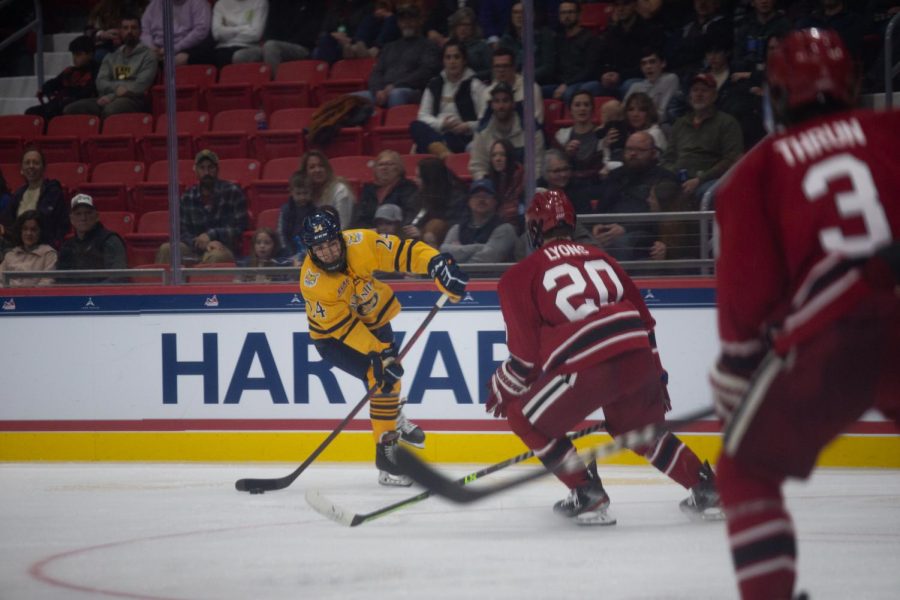 Even though Quinnipiac fired 49 shots on net, Harvard’s 17th shot of the game secured the Whitelaw Cup and ECAC Hockey championship as well as an automatic qualifier in the NCAA playoffs.

Tournament MVP and freshman forward Matthew Coronato called game with a laser of a wrist shot top shelf from the slot during an odd-man rush. It was his third goal, second game-winning goal and sixth point of the weekend.

“It’s an unbelievable feeling,” Coronato said. “We’ve got a lot of great players up and down our lineup. It’s a lot of fun to be with this group.”

It took overtime to get the win, but Harvard came out flying, scoring within the first two minutes of the game after Quinnipiac turned the puck over twice on a breakout.

Just a few minutes later, Quinnipiac answered as senior forward T.J. Friedmann buried a shot on the rush and crashed into the boards as he celebrated.

After being tripled in the shot department during the first period, Harvard controlled play a little bit more in the second. Midway through, the Crimson capitalized on its second power play of the game when freshman defenseman Ian Moore blasted a slapshot off the post past Quinnipiac freshman goaltender Yaniv Perets.

With 6:20 left, Quinnipiac drew another penalty for its fourth power play of the game. Head coach Rand Pecknold once again proved he isn’t afraid to pull the goalie early, bringing Perets to the bench to give the Bobcats a 6-on-4 advantage. Both teams called timeout leading up to the ensuing faceoff.

“I wanted Jayden to be in a particular spot, and Rand had a play set up for us,” Bongiovanni said. “I was lucky enough to snap it back and he made a great shot. We made a great net-front presence. The goalie couldn’t see the puck. Hockey can sometimes be a game of luck, but that was pretty orchestrated.”

“Moving forward, our team expects excellence,” Bongiovanni said. “This one hurts, but we kinda got to put it in the rearview mirror and move forward with a positive attitude and understand what we did well today.”

The Bobcats earned an at-large bid to the NCAA tournament, but are waiting for the committee to decide their regional site and opening round opponent, to be announced during Sunday’s selection show.