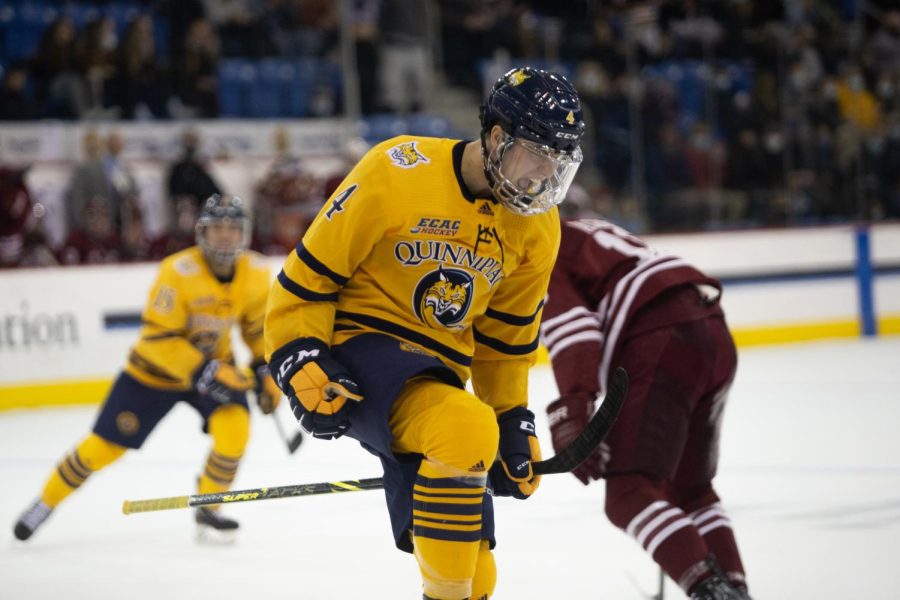 In less than a day, the No. 1 Quinnipiac Bobcats will face the No. 4 Colgate Raiders for a spot in the ECAC Hockey championship.

Both semifinal matchups are once again being held in Lake Placid following a two-year hiatus due to COVID-19. The winner between Quinnipiac (30-5-3) and Colgate (18-17-4) will play the winner of the Clarkson and Harvard game.

It’s no secret that Colgate struggled at times throughout the season. However, there were multiple games during the season where the Raiders played up to their competition.

Earlier in the year, Colgate battled to multiple one-goal losses to then-No. 13 Western Michigan, who finished the season as No. 7 in the country. Additionally, the Raiders defeated Cornell twice in the regular season (once in a shootout) and eliminated the Big Red in the ECAC Hockey quarterfinals.

However, in the two games the Bobcats and Raiders played against each other this season, Quinnipiac won both by a combined score of 9-1. Quinnipiac has had Colgate’s number for the last several years, going 16-4-1 in the last 21 matchups.

The glaring difference between both teams is five-on-five and even-strength play. The Bobcats dominate opponents at even strength by possessing the puck for long periods of time, putting a lot of pucks on net on offense and in the defensive end they transition quickly from by suppressing shots against.

Quinnipiac is actively the second-best team in the country in even-strength shot differential. Colgate, however, ranks 35th in that category with a marginally negative differential.

Scoring at even strength is not an issue for either side, with Quinnipiac and Colgate standing sixth and 13th respectively in goals for. It’s in the defensive end where the Raiders fall short in comparison. The Bobcats allowed the second-least amount of even-strength goals with 30, whereas Colgate sits in 42nd with 79 against.

Goaltending plays another major difference between the two teams. Quinnipiac freshman sensation Yaniv Perets has tyrannized opponents in net, setting records in the conference for save percentage, goals against average and shutouts. In addition to his conference records, Perets won the Ken Dryden Goalie of the Year and the ECAC Hockey Player of the Year, and has the potential to rewrite men’s Division I records.

In net for Colgate is senior Mitch Benson, who took the reins as the starter midway through January. Since then, Benson has started in 17 games, showing stretches of dominance. He’s only struggled between the pipes in three games since he’s taken over. Two of those times came against Quinnipiac where he surrendered four goals on 26 shots in both contests.

Since the regular-season finale at Quinnipiac, Benson proved how good he can be by stopping 162 of the 170 shots he faced in the first round against Yale and the quarterfinal round against Cornell. To put into perspective how impressive that is, Benson’s SV% in those games was .953, which is exactly what Perets ended the season with.

Both teams have their eyes set on advancing to the championship in hopes of lifting the Whitelaw Cup. Eight years ago, Quinnipiac and Colgate faced each other in the semifinals, with the Raiders advancing.

The Bobcats look to reverse that outcome Friday evening at 4 p.m. at the Herb Brooks Arena.