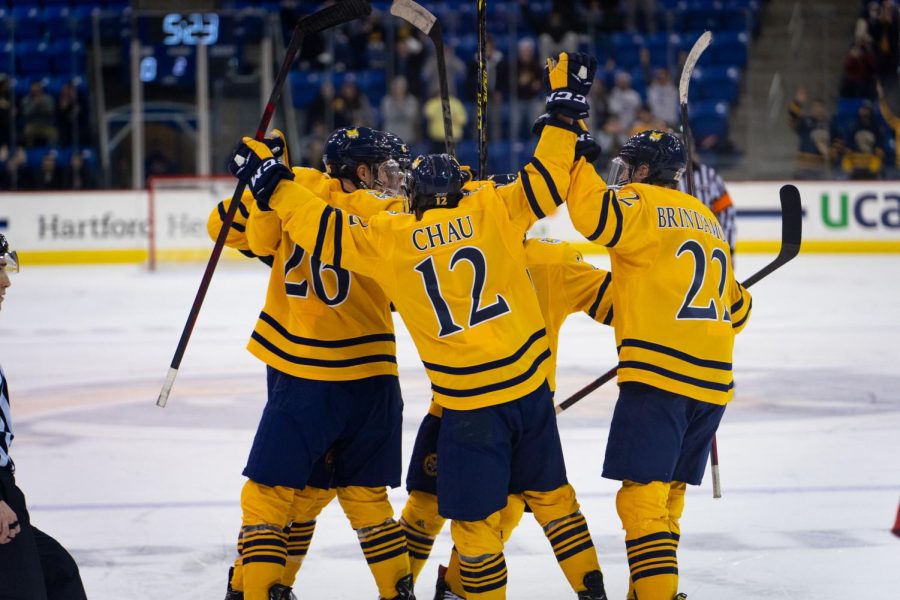 A one-time blast, the clank of glass and the eruption of the Quinnipiac crowd — three distinct sounds that sequenced the Bobcats’ double overtime series-winning goal against St. Lawrence.

After 90 minutes of ice time, a set draw play in the offensive end developed into a slapshot from graduate student defenseman Griffin Mendel, which barely missed the net. Senior forward Desi Burgart collected the loose puck next to the crease and chipped it past the goal line to send Quinnipiac to the semifinals for the first time in five years.

We will see you in Lake Placid!

Quinnipiac wins it in double overtime.

Desi Burgart with the winner. pic.twitter.com/Iw9a3dp7Cw

The Bobcats flooded the ice as Burgart celebrated toward the zamboni entrance.

“For me and especially our class personally, we’ve never been to Lake Placid before,” Burgart said. “That was our motivation for everything tonight. Down 3-1, we came back. All we want to do is go to Lake Placid to win the Whitelaw (Cup).”

The shot that led to the eventual goal was not the only important play to come off the stick of Mendel. The transfer continued his point-scoring tear in the playoffs, picking up a goal and an additional assist on the power play.

Mendel’s second-period goal also came from a faceoff win. This time his slapshot found twine, tying the game one apiece as Quinnipiac amped up the pressure.

“It’s kind of surreal, I’m not very used to it,” Mendel said. “It’s always nice to get the contribution and help the team win.”

St. Lawrence added two goals early in the third to take a 3-1 lead, but not without a little controversy. The first one developed in transition as junior forward Jordan Steinmetz scored on an odd-man rush.

That pass came off the stick of freshman defender Philippe Chapleau who wrapped around his own net and fired a pass up the middle onto Boyer’s blade just before the Bobcats’ blue line. Boyer promptly entered the zone and beat freshman goaltender Yaniv Perets’ glove side to give the Saints a two-goal lead.

St. Lawrence clearly had six skaters on the ice as the goal happened, to the point that Boyer was celebrating before a Saints player returned to his bench.

How do you miss this as an official? @ecachockey that's unacceptable.

Clearly six skaters out for St. Lawrence with not a single player remotely close to the bench as the extra skater cherry picked. #ecachockey @QUChronSports | @QUChronicle pic.twitter.com/oTdAUu5wGj

“At the time we didn’t, now we do know, and obviously that’s on us as a staff,” Quinnipiac head coach Rand Pecknold said. “We need to challenge that. It’s on the referees, they need to see it. The goal would have been overturned. Luckily the players bailed the coaching staff out.”

Adversity played a key role in motivating the Quinnipiac comeback. Graduate transfer defenseman Brendan Less righted the Bobcats’ course, snapping a shot from the Quinnipiac logo just inside the blue line and finding the back of the net. The power-play goal cut St. Lawrence’s lead to 3-2.

The first overtime held a lot of back-and-forth action, with several near chances for either side. However, this game needed an additional overtime period to decide the winner.

Burgart’s fourth game-winning goal of the season and double overtime winner helped Quinnipiac make its return to Lake Placid. The Bobcats have not reached this point since St. Patrick’s Day 2017.

Almost exactly five years later, Quinnipiac will play in the ECAC Hockey semifinals. Its opponent is to be determined as two other ECAC Hockey quarterfinal series need three games for a winner to emerge.

Quinnipiac will play either RPI if the Engineers upset Harvard, or the winner of the Colgate vs. Cornell series. Regardless of the opponent, the Bobcats are slated to play Friday, March 18, at 4 p.m.