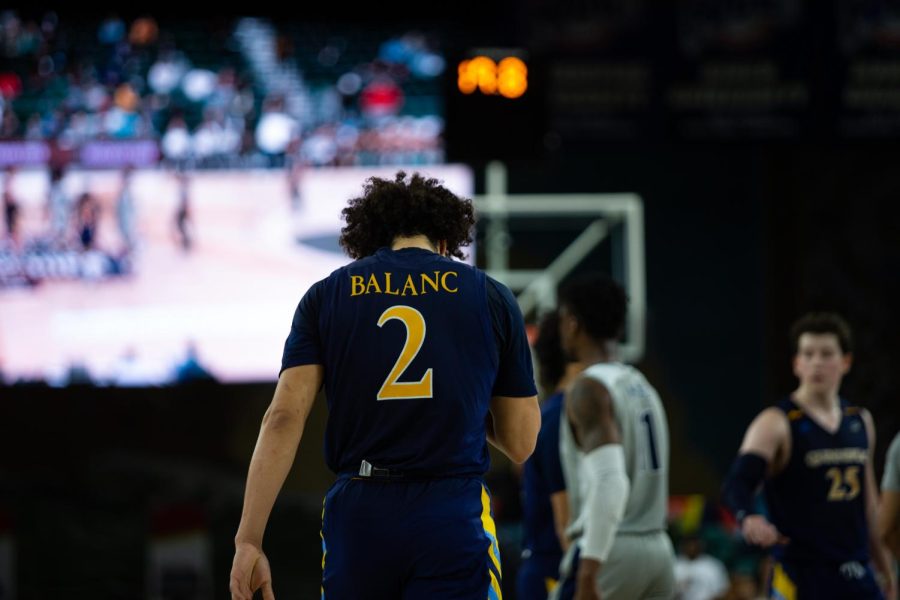 The Bobcats’ season were a win away from the MAAC championship game, but they will remember the season as one defined by “grit” and “improvement.”

The Quinnipiac men’s basketball team’s MAAC Tournament run as the first 11th seed to reach the semifinals has finally come to a close as it fell to No. 2 Saint Peter’s 64-52.

Saint Peter’s defense, specifically senior forward KC Ndefo, was the biggest reason why Quinnipiac’s MAAC championship dreams concluded prematurely. The 6-foot-7 forward did nothing short of taking over the game on defense, proving why he deserved to be named MAAC Defensive Player of the Year for the third season in a row.

Ndefo’s presence on the court was especially prominent throughout the second half, altering the complexion of the game. He effectively played the cat-and-mouse game — staying between the ball handler and the roller — not giving the Quinnipiac offense any advantage. This was significant as the Peacocks did not clamp down on the Bobcats’ offense as well in the first half.

“We went into the locker room, we knew we weren’t playing St. Peter’s basketball,” Ndefo said of the first half. “Off the screens, we weren’t doing our assignments. So you know, coming into this second half we knew we have to buckle down on defense and get stops when they’re needed and that’s what we did out there.”

Ndefo, and by extension the Peacocks, showed why they’re one of the most fearsome defenses in the conference and put a lid on the basket for the Bobcats’ offense.

Besides Ndefo disrupting Quinnipiac’s screen-and-roll game, he made multiple statement blocks on Marfo. The Peacocks’ rim protector swatted Marfo twice in the last four minutes of the game, first at the 3:48 minute mark and a second time after Marfo rolled to the hoop with 2:16 remaining

These defensive plays, along with a Balanc rejection Ndefo had with less than a minute left in the game, gave the all-world defender three total blocks, completely shutting the door for any potential comeback by the Bobcats. Quinnipiac finished the game 9-of-21 on layups.

The Quinnipiac Bobcats also struggled from beyond the arc after redshirt junior guard Matt Balanc drilled all three of Quinnipiac’s 3-pointers in the first seven minutes of the game. The fourth and final 3-pointer Quinnipiac made happened at the 7:53 minute-mark, which also came from Balanc. The team made 25% of its shots from deep.

Quinnipiac’s first half was highlighted by the hot shooting from Balanc, who scored 11 of his 14 points in the first eight minutes of the game. Additionally, Marfo scored six of his 10 points, including some emphatic scores such as his poster dunk on junior forward Hassan Drame. More importantly at that point, he properly sprayed the ball out to shooters for three assists and had multiple hockey assists. In the first 20 minutes, the Peacocks were confused defensively when it hard hedged after sophomore guard Dezi Jones received screens from Marfo. The Bobcats ended the half leading 31-30.

Part of the Peacocks’ struggles offensively was due to the lack of production from their leading scorer and a member of the All-MAAC Third Team Daryl Banks III (11.1 points per game). He was 1-of-7 from the field in the field half and finished the game with six points.

Saint Peter’s is championship-bound and will meet No. 4 Monmouth on March 12. The Bobcats on the other hand will not remain in Atlantic City as its hopes of hoisting the trophy are officially over. But this game’s disappointing result for Quinnipiac does not erase the fact that it overachieved in a way that was historic.

“The team that quite obviously just had a lot of grit, not necessarily defined by the record, but defined by their improvement, and their mental toughness,” Dunleavy said.

Rigoni, who was a big reason for why the Bobcats advanced this far in the MAAC tournament, has played more games in a Quinnipiac uniform than anyone in the team’s history.

“I just remember the guys that I did it with, this one of the most enjoyable years because of the group of guys we had in the locker room,” Rigoni said. “It made the tough times a lot easier when you had guys that you could trust …  And I remember the times off the court we had together, just the resilience. Teams, don’t do that, they don’t lose six games and then come together and play their best possible basketball after that and (that’s) something I’ve cherished about this group.”