No. 2 Quinnipiac women’s basketball can’t keep up with No. 3 Manhattan in semifinals, outrebounded by 13 in 72-59 loss 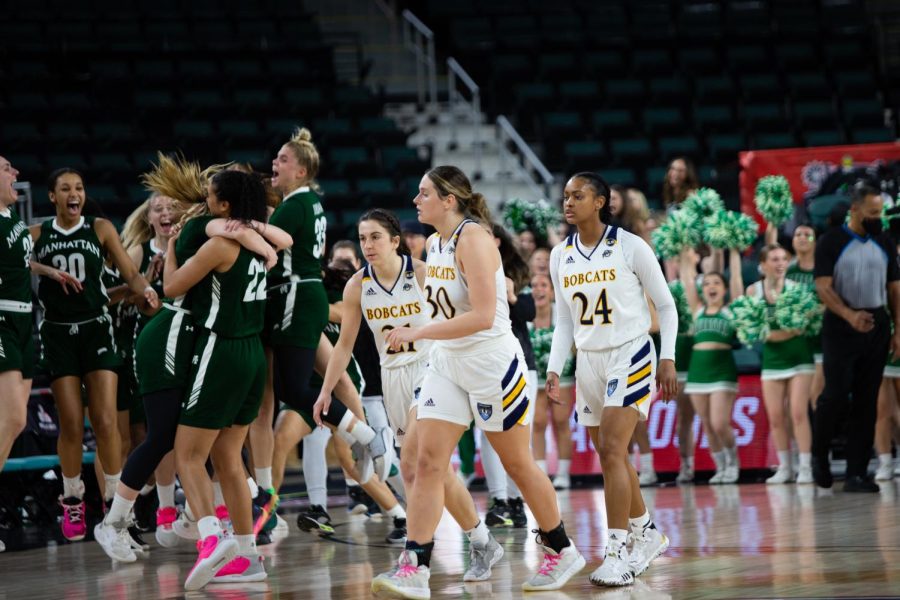 The No. 2 Quinnipiac women's basketball team lost in the semifinals to No. 3 Manhattan 72-59.

Similar to its quarterfinals game against Saint Peter’s, the No. 2 Quinnipiac women’s basketball team shouldered a titanic deficit in the first quarter against No. 3 Manhattan. But the Jaspers are not the Peacocks.

The Bobcats couldn’t recover from their 27-12 hole in the opening frame and took a 72-59 loss in the semifinals two days after pulling off a 14-point comeback. The second-highest seed in the tournament will now watch the championship game from the couch.

Quinnipiac made it a four-point game with seven minutes left against Manhattan, but the Jaspers stayed composed, made their shots and kept pressure on the Bobcats. With the game down to the wire in the final quarter, Quinnipiac went 0-4 from the floor and had two turnovers in the span of four minutes.

“We had ample opportunities, we kept them at bay, we kept putting ourselves in a position to get that game tied and take the lead and we just couldn’t do it,”Quinnipiac head coach Tricia Fabbri said. “The ball bounces funny this time of year.”

The two teams split their regular-season meetings and were even opponents before tipoff, but the sports world was against the Jaspers in multiple ways. Not only were they 4.5-point underdogs, but Manhattan hadn’t been to the MAAC championship game since 2003.

And who were the two coaches who ruled the women’s conference tournament for those 19 years? Marist’s Brian Giorgis, and Fabbri. This is the first time since 2003 that neither of them are playing for a trophy.

Manhattan head coach Heather Vulin stared down one of the winningest coaches in the conference, who she has never played in the MAAC tournament, and challenged her to match her starting lineup that features only one player who isn’t six feet tall: junior guard Dee Dee Davis. She was second in the MAAC with 18 points per game this season.

The Bobcats couldn’t keep up. Junior forward Cur’Tiera Haywood, Quinnipiac’s lengthiest player, had a great day with 16 points, but 5-foot-9 senior guard Mackenzie DeWees struggled against the bigger lineup with only nine points in what may be the final game of her career.

The Bobcats couldn’t get on the same page in the first half. Their lifeline, the 3-ball, didn’t land like they’re capable of, only going 5-17 from deep.

That’s the harsh reality of March basketball. Sometimes what it takes to win a basketball game this time of the year is to shoot at a higher clip than anyone could expect.

Ask the No. 11 Quinnipiac men’s basketball team. It’s won its last two games on the back of 48% shooting from the 3-point line, even as underdogs. The Bobcats didn’t have that gear, and they couldn’t make up for it in other ways.

The biggest disappointment in the game was junior forward Mikala Morris, who was overwhelmed by Manhattan’s size and length. She faced consistent double teams from several players who are over six feet tall, which led to seven offensive boards for Manhattan in the first half and only one for Quinnipiac.

Mikala Morris gets loud after this and-1.

It's been a frustrating day for her and she lets it out here; she's missed time with foul trouble, been outrebounded and committed turnovers. pic.twitter.com/9Na4UKnyhA

Morris finished with a plus-minus rating of -26 and only had seven rebounds. The Bobcats needed her to continue her strong play from the quarterfinals against Saint Peter’s, but the combination of junior forwards Jenna Jordan (six points, five rebounds) and Brazil Harvey-Carr (22 points, nine rebounds) kept Morris off the glass and prolonged possessions.

Manhattan All-MAAC First Team selection graduate student center Courtney Warley grabbed 11 rebounds, four of them offensive. She guarded her First Team counterpart DeWees for much of the game, but had the size and strength to box out Morris for important boards.

Outside the rebounding game, Quinnipiac also came up short in the turnover battle. The Bobcats committed 11 turnovers compared to the Jaspers’ seven, and didn’t play with the toughness they usually have to come up with loose balls.

“I thought there were just ample opportunities where we just had our hands on the ball, 50/50 balls that we needed to get, that we didn’t get,” Fabbri said.

Seniors on the team include three starters: DeWees, point guard Rose Caverly and guard Amani Free. DeWees said in the press conference that she’s unsure about her future as a graduate student, as the NCAA granted all athletes on an active roster during the COVID-19 cancellation an extra year of athletic eligibility.

Caverly and Free have not indicated their intentions yet, and there are no graduate students on the team.

The MAAC championship between the No. 3 Jaspers and No. 1 Fairfield Stags is Saturday morning at 11, with the winner receiving an automatic bid to the NCAA Tournament.