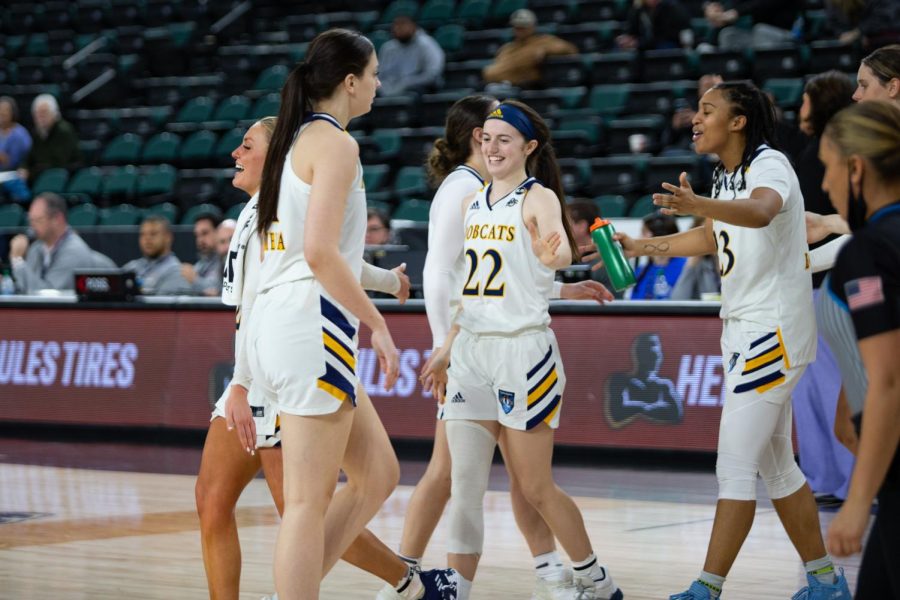 Senior guard Mackenzie DeWees scored her 1,000th career point on a free throw in the third quarter against Saint Peter's on March 9.

The No. 2 Quinnipiac women’s basketball team played one of its worst quarters of basketball this regular season. The Bobcats turned the ball over, made errant passes and lost assignments on defense in the first eight minutes of play.

“We were a little frantic in the first couple minutes of the first quarter,” senior guard Mackenzie DeWees said. “First-game jitters — everybody has them.”

The Bobcats trailed 18-4 with two minutes left in the first frame to No. 7 Saint Peter’s. Crazy, right? Here’s something crazier.

The Bobcats led 26-23 at halftime while All-MAAC First Teamer DeWees sat on the bench. After committing a pair of fouls in the first two minutes of the game, DeWees was subbed out and spent the rest of the first half observing from the sideline with a towel in hand. When she returned, she put up 11 points in a single quarter and led the Bobcats to a 63-42 victory.

“I think you guys saw how jittery I was, kind of pacing up and down the sideline,” DeWees said. “All I could do was help my teammates out, help in the huddle and be loud and be energetic.”

And what was her reward for watching helplessly from the sideline while her team made a pronounced comeback?

Bench goes crazy, DeWees is smiling. This is the free throw that pushed her over 1,000 career points. Storybook.@quchronsports #MAACHoops pic.twitter.com/UEN7cyMK54

“I was super excited when I hit that, and the first thing I do is I looked at coach and I smiled,” DeWees said. Head coach Tricia Fabbri interrupted with an ice-cold response and said, “I didn’t. I said ‘play defense.’”

The Bobcats outscored the Peacocks 37-19 in the second half in which DeWees played 13 minutes. Quinnipiac also dominated in the second quarter 16-5, without DeWees.

Despite the Peacocks’ lower seed, they were a tough out. Saint Peter’s graduate student guard Kendrea Williams, an All-MAAC Second Team selection, had 12 points in the first half and 16 in total.

Her backcourt partner, senior guard Nickelle O’Neil, finished with 11 points and exploited a weakness in the Bobcats’ defense. Quinnipiac is been prone to being stretched vertically, and O’Neil did that with her top-end speed and quickness.

Junior forward Mikala Morris had a tough matchup against sophomore forward Sky Castro. The former finished with 13 points and eight rebounds while the latter had two points and seven rebounds, a far cry from her 19 rebounds the day prior.

In no way was this an unfair fight. The Peacocks had the players to match up against Quinnipiac. But with an 18-point tidal wave over the Bobcats’ heads, they exhaled and played to their strengths.

Junior guard Sajada Bonner locked up Williams in the second half, continuing her season of phenomenal defense. Fabbri said earlier this season that Bonner would draw the other team’s best player, and Bonner was square to the task against Saint Peter’s.

“I thought Jada was really the one who stood the ground and laid down how we’re going to get back into the game defensively,” Fabbri said. “She really cemented for us, gave us an anchor.”

The defensive system that failed in the first quarter returned to its midseason form. The Bobcats settled down after a panic-stricken opening and did everything it needed to do to shut down the Peacocks.

“I wanted to be a voice on the backside letting my guards know, ‘Hey, get through the screen’ and really eating up everything, if a guard got past them, eating up and cleaning up things,” Morris said.

Exceptional defensive communication brought the Bobcats to a new level during the regular season, and it saved them when their championship hopes were teetering over the edge in the quarterfinals.

“I love this team, this resilience, and I love that it’s imperfect,” Fabbri said. “We find ways to get to the right answer.”

The Bobcats return to the court March 11 at noon to tip off against the winner of Thursday night’s matchup between No. 3 Manhattan and No. 11 Canisius.