No. 7 Saint Peter’s matches up with No. 2 Quinnipiac in the MAAC quarterfinals: Biggest storylines to watch 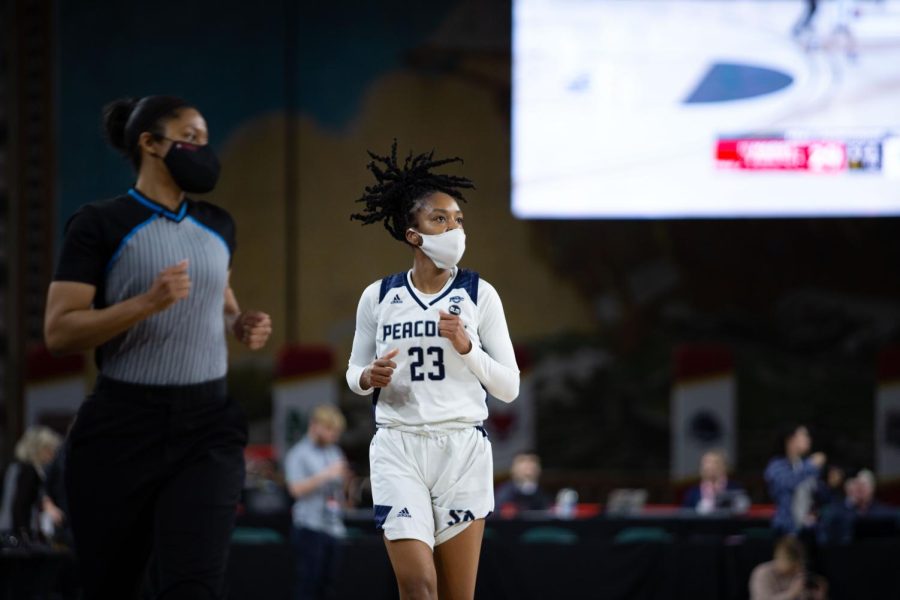 In the second game of the 2022 MAAC tournament in Atlantic City, the No. 7 Saint Peter’s Peacocks throttled the No. 10 Marist Red Foxes 49-29. Marist shot an appalling 1-of-22 from 3-point range and bowed out of the first round of the tournament after winning the whole thing last year.

Why should you care? That game decided the No. 2 Quinnipiac Bobcats’ opponent in the quarterfinals. Enjoying a first-round bye due to their high seed, the Bobcats will now face off with the Peacocks March 9 at 3:30 p.m.

Here are the big storylines to watch following the Peacocks’ dominant first-round victory.

The curious case of Kendrea Williams

Saint Peter’s graduate student guard Kendrea Williams put on an absolute electric show in the opening minutes of the game. She hit two 3-pointers and made two layups, one off a midcourt steal. After racking up 10 points in the first quarter alone, she enthusiastically tugged on her jersey in the direction of her bench and yanked the ripcord on the Peacocks’ offense out of its socket.

“She carried us in the first half, I told her that in the locker room,” Saint Peter’s head coach Marc Mitchell said.

Then Williams didn’t score for the rest of the game. She finished with the 10 points she scored in the first half.

There’s no doubt she’s a capable scorer — she averaged 14.7 points per game en route to an All-MAAC Second Team selection. She dumped out her entire bag of tricks in the first quarter with her scoring and her steals, but she isn’t an exceptional facilitator.

As an explosive scorer on the perimeter, she’ll likely draw Quinnipiac junior guard Sajada Bonner on defense. That will be a great matchup to watch.

Player of the Game Sky Castro blew the roof off the stadium on the defensive end with 19 rebounds. At 6 feet, 2 inches, the sophomore forward dominated her assignments and showed more grit than her frontcourt opposition on the glass.

Now that the Peacocks have dispatched the Red Foxes, they’ve looked forward in the bracket to see the No. 2 Quinnipiac Bobcats waiting for them. Meeting the Peacocks’ gaze is junior forward and prolific rebounder Mikala Morris.

Morris, named an All-MAAC Second Teamer, is coming off a recent streak of seven straight double-doubles and finished three rebounds shy of the MAAC lead. Morris averaged 6.6 rebounds per game while Castro checked in at 4.2.

“It’s gonna be a great matchup, Mikala Morris is one of the best players in our league,” Mitchell said. “I think that Sky is up for the challenge. She knows how good Mikala is defensively.”

In this year’s bracket, Morris will have to face Castro, then if the Bobcats move on, she’ll match up with Manhattan’s graduate student center Courtney Warley. That is, if the No. 3 Jaspers can take down the No. 11 Canisius Golden Griffins, who upset the No. 6 Monmouth Hawks 71-65 on March 8.

By the way, Canisius became the first No. 11 seed team to make it past the first round of playoffs in MAAC women’s basketball history. Not that it directly affects Quinnipiac, but for the love of March basketball, it’s worth noting.

Regardless, Morris has been a tremendous interior presence this season on both ends of the court. But she will be challenged.

The absence of Kassondra Brown

Losing your all-conference second team center in the final game of the regular season is a gut punch, a slap in the face and a spit on the shoe all at once.

“When you lose a player as prominent as Kassondra Brown, everyone has to step up,” Mitchell said.

Prominent is an understatement. Brown is the team’s leading scorer with 14.9 PPG and hauls in a healthy 6.8 RBG.

Even without 6-foot-2-inch Brown, the frontcourt rotation still showed off its height advantage. Ikenasio (6 feet, 1 inch) was an important part of the rotation today with 14 minutes, as was Dawkins with 25 minutes. Dawkins’ matchup with Marist sophomore forward Zaria Shazer was one of the more exciting elements of the otherwise dreary game, as the two traded points and rebounds.

The combination of the three bigs sans Brown was especially effective in stifling second-chance opportunities for Marist.

“I just think we locked in defensively and decided that we were gonna really rebound the basketball, and I think we did a great job with that,” Mitchell said.

Castro will be tied up with Morris, but there is still significant size to go around for Saint Peter’s. It wouldn’t be shocking to see an extra dose of junior forward Cur’Tiera Haywood (6 feet, 2 inches) or freshman forward Grace LaBarge (6 feet, 3 inches) to offset that disparity.