Off-campus housing community concerns down by 53% 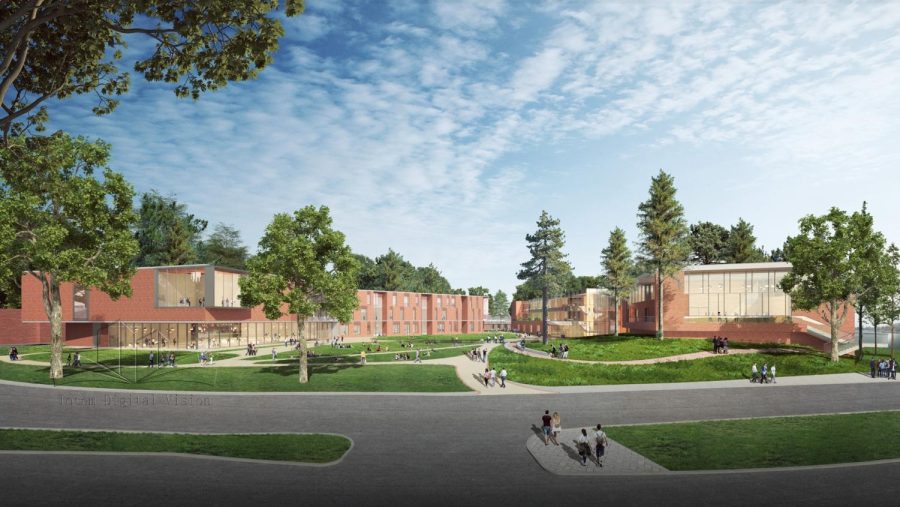 A rendering of the South Quad shows the proposed blueprint for the three new buildings Quinnipiac University plans to build by 2024.

The university presented the newly announced construction projects to the zoning commission on Feb. 22, and the first topic the commission asked was on-campus parking.

“What do you anticipate for increased parking needs?” asked Commissioner Jay Cruickshank, referencing that the projects would bring in more students and visitors. “It seems kind of tight in there, where would parking end up being for additional cars?”

“We believe, from all the projects we’ve done in the past and the accounting of parking, that we have more than enough than we need for development,” Filardi said. “We have literally a-thousand-plus empty spaces (excluding York Hill garage) at any time during the day.”

Quinnipiac has a total of 4,451 parking spots on the Mount Carmel and York Hill campuses and off-campus lots.

He said the issue with parking lies with the location of the available spots because they are not where people want to park.

As parking has been a problem facing the student body, the university continues to answer the issue by promoting shuttling and strictly enforcing the parking rules. Vice President for Strategy and Community Relations Bethany Zemba said the university is trying to change the student culture to address parking concerns.

“There is a shuttle that runs back and forth but this is kind of an on-demand society, so people don’t like to wait,” Zemba said. “We are trying to install and institute ways to get the students to understand the ways they could come to campus so that it makes it easy.”

Another means the university uses to address parking is through a graduate-level business class. The School of Business offers a consulting, capstone course that asks students to examine current parking policies and come up with new suggestions for the administration, D’Lisa McKee, School of Business assistant dean for graduate programs, told The Chronicle.

The commission also asked about future enrollment and the differences in enrollment in the past three academic years.

“Has there been a decline in enrollment?” asked Commissioner Michele Mastropetre. “And I’m not talking about North Haven, just the Hamden campus.”

Despite a previous projection of over 6,841 undergraduates in the 2022-23 academic year, Filardi said the current estimate for the next year is at 6,100.

“We’re significantly less than we were at our peak in 2019,” Filardi said, noting that there are 900 fewer students now in comparison with three years ago.

In 2019, full-time undergraduate student enrollment was at 7,051 and it decreased by 7.2% in the following year. The enrollment also has declined in the past few years due to the COVID-19 pandemic, failing to meet the university’s goal.

Zemba stressed that the expansion “is not a plan to grow the student population,” but it will be a space for students once the three-year housing requirement is in effect next year.

The university introduced the residential requirement in 2021, aiming to maximize students’ personal and professional development. Admitted students last year questioned the necessity of the mandate, emphasizing financial burden and its length.

As Quinnipiac and Hamden have faced issues regarding off-campus students in the past year, Zemba said, the university established a task force to directly address the problems.

Chief of Public Safety Tony Reyes said the university received 53% fewer complaints from the concerned Hamden community regarding off-campus housing. There were 73 reports last year, but only 34 so far this academic year.

Among the 34 calls, the majority 16 of them were because of loud parties, six were noise complaints and the other six were for trash. The remaining six calls were traffic, students in the street and on-lawn drinking complaints.

“The most important thing is people understand that these are college students, what they want is the responsiveness from the university and so we’re doing our part,” Reyes said. “Out of all the 34, we only have two repeat offenders.”