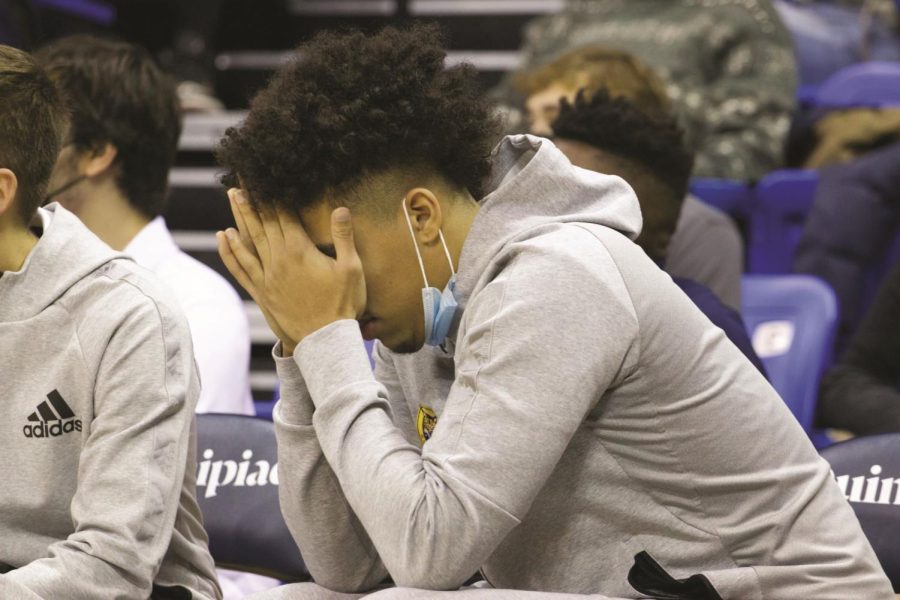 Quinnipiac men's basketball lost seven of its last eight games and is currently on a four-game losing streak.

An offense propelled by strong team play like Quinnipiac’s, comes with a great responsibility to take care of the ball. If the Bobcats achieve this, it has reason to be optimistic come playoff time.

The Quinnipiac men’s basketball team is not positioned in the upper half of the MAAC standings as the regular season comes to a close. It has lost three straight and has two games remaining before the conference tournament gets underway in Atlantic City, New Jersey.

Winning their last two games can play a vital role in drawing a more favorable matchup in the bracket and improving its chances of winning in the tournament.

The last time Quinnipiac advanced past the first round of the tournament was the 2017-18 season, year one of the Baker Dunleavy coaching era. This will be Dunleavy’s fourth MAAC tournament as the 2019-20 postseason was canceled due to the COVID-19 pandemic.

As the No. 8 seed last season, the Bobcats lost to the No. 9 seed and eventual conference champion Iona Gaels 72-48 in the first round. If the Bobcats don’t want a repeat of last year, they must not beat themselves.

Turnovers have haunted the Bobcats this regular season. Quinnipiac is third-worst in the conference in both turnovers per game (12.9) and turnover margin (-0.38).

The error-prone nature of the Bobcats is in part a consequence of Dunleavy’s movement-heavy offensive system. The offense works best when good passes are delivered to players executing cuts and have defenders trailing after backscreens.

This style creates open shots and gets a multitude of players involved. Of those who have played at least 20 games, six Quinnipiac players average at least eight points per game. No other team in the conference has more than five players that eclipse that scoring output.

“We don’t have that one guy that’s going to lead us in scoring,” Dunleavy said last month. “So based on how the defense plays, based on what’s open that game and what we’re executing, different guys are going to have to step up.”

It is no accident that the Bobcats average the second-most assists per game in the conference (14.5). Quinnipiac’s solid passing needs to continue if it wants to get out of the first round of the tournament.

The mistakes Quinnipiac makes from not taking care of the rock don’t only take away potential shooting opportunities for itself, but it also gives opponents quick, uncontested scores.

While anyone is capable of getting an assist in Dunleavy’s system, the bulk of playmaking comes from graduate student Kevin Marfo, the best passing five-man in the conference. He averages 4.1 assists per game, third in the MAAC and the most assists by a non-guard. While the 6-foot-9-inch big passes to cutters well from the high-post area, he also gives it away a fair amount, averaging 3.5 turnovers per game.

“I play a big role in (the turnovers) because the ball happens to be in my hand a lot more,” Marfo said. “I have to be better in those situations and I have to continue … (to) make the right play, and sometimes the right play is not making that pass.”

The Bobcats’ brand of basketball can lead to some tournament success even if the regular season has not been great record-wise. The team still averages the second-most points per game (72.6) in the conference and is capable of getting hot from beyond the arc — leading the MAAC in made 3-pointers per game (8.8).

The last time the team advanced past the first round, it reached the semifinals. What was the team’s conference record then? The same as it is now, 7-11.

Quinnipiac has an offensive identity going into Atlantic City, which is  a positive. If it wants to maximize its potential, it must minimize blunders.