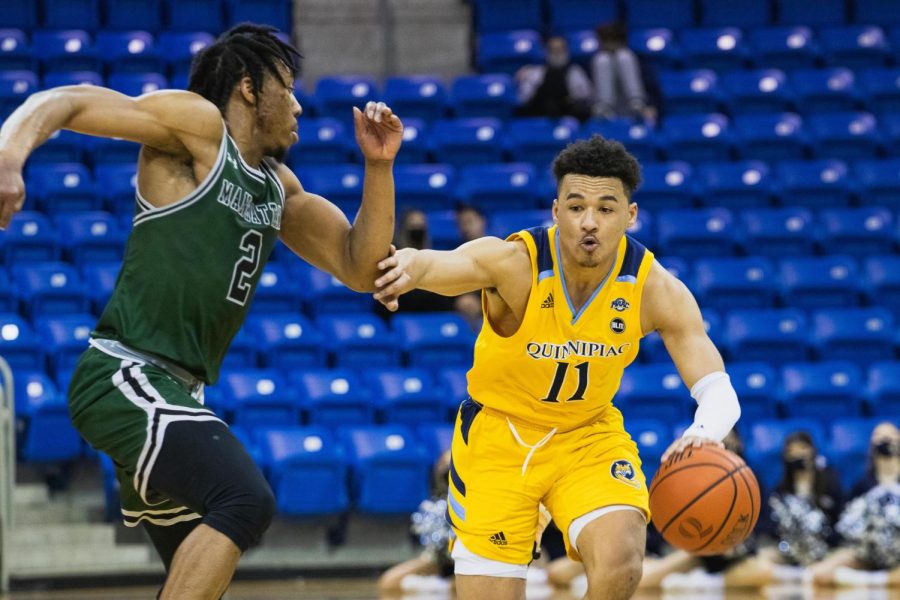 With tonight’s 78-71 loss, Quinnipiac men’s basketball has dropped to below .500 on the season and 7-10 in MAAC play. The Bobcats have now lost three straight games and are just 3-7 in their last 10 contests.

“It’s either a question about whether you believe in your ability to get it done or you don’t, and I believe we have the ability to get it done,” Quinnipiac coach Baker Dunleavy said. “I thought we played one of the best games of the year up at Marist … we were just one bounce away … I believe in our guys wholeheartedly but we need to pull ourselves out of this stretch, no one is gonna do that for us.”

The rough stretch has come at a pivotal time in the Bobcats’ season as they jockey for playoff position with the rest of the conference.

Despite the loss to Siena tonight, one of the silver linings was the 3-point shooting as a team tonight. As a team, the Bobcats made 10 of 25 from deep (40%) tonight, which is marginally better than their average 3-point percentage this year (34.6%).

The number of 3s that Quinnipiac took tonight may have been a byproduct of playing catch-up in the game, but the Bobcats had no reluctance to fire from downtown.

Nonetheless, the team shot effectively from beyond the arc tonight. Sophomore guard Dezi Jones and sophomore guard/forward Tymu Chenery were two major contributors to the Bobcats’ 3-point success tonight, as they combined to go 7-for-13 from deep tonight. Jones went 4 for 7 from 3-point land, while Chenery went 3-for-6 tonight.

The encouraging part about the 3-point shooting tonight was that — despite junior guard Matt Balanc, one of Quinnipiac’s leading 3-point shooters, going 0-for-5 tonight — the Bobcats had a multitude of players who contributed to the 3-point success tonight.

The 5-foot-10-inch guard had no reluctance and unlimited confidence to shoot the ball from beyond the arc tonight. The entire offense ran through Jones tonight, which paid major dividends for himself and his teammates.

Jones didn’t just make it a priority to score tonight, as he made a deliberate effort to get his teammates involved. With that said, Jones was efficient, shooting 10-for-15 from the field, with 24 points on the night.

Dezi Jones is catching fire, knocking down yet another three point field goal for the Bobcats. He is showing no reluctance to shoot the rock, as he’s 2 for 4 from three, with 14 points. Quinnipiac is down 51-46 to Siena with 11:25 left in the second half. #MAACHoops pic.twitter.com/DF9DmS5pyr

Even though they were great on the offensive end, the Bobcats struggled to put together a complete performance on the defensive end.

The Bobcats allowed Siena to shoot over 50% from the field and 40% from 3-point range. Despite the Bobcats switching between half-court and full-court defense, and even mixing in an occasional 2/3 zone defense, Siena junior guard Colby Rogers scored 18 points on 6-of-11 shooting from the field to lead the Saints to the victory.

While it’s easy to get caught up in his stats from 3-point territory tonight, Chenery put his versatility on display tonight. Playing second fiddle to Jones, Chenery answered the call and delivered in a massive way tonight against the Saints.

The sophomore showed the immense impact he can make on the basketball court beyond just knocking down 3s. Chenery was aggressive driving to the basket, distributed the ball to multiple teammates and played lockdown defense throughout the game tonight.

He finished the night with his second-highest point total on the season (16), and tied his personal-high in 3s in a game this season (3) — a trend he began Feb. 20 against Marist. However, these stats don’t paint a perfect picture of how imperative Chenery was tonight against the Saints.

Despite the loss, Chenery showed off multiple facets of his game that stood out tonight. Chenery is continually showing how multi-dimensional he is, which could be key down the stretch in the Bobcats’ season.