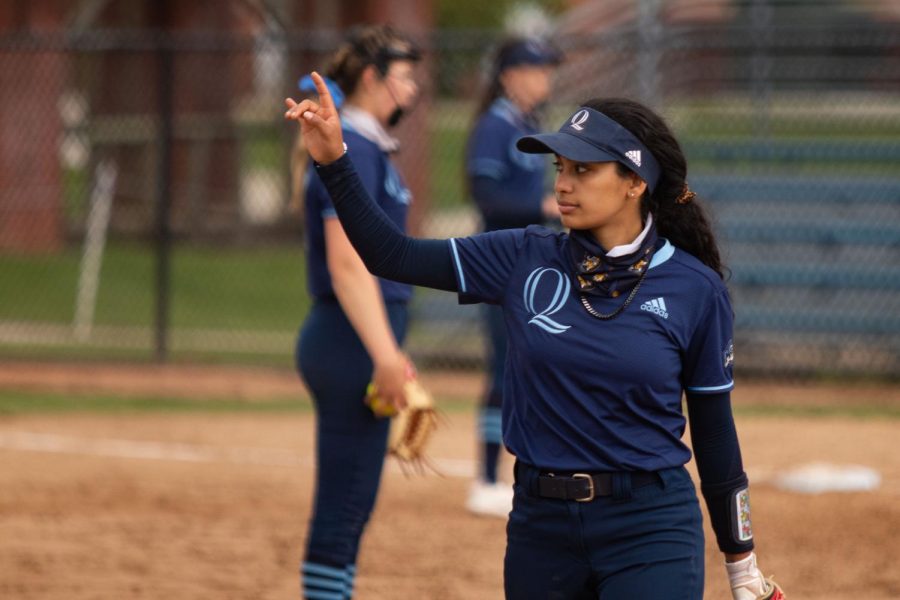 Quinnipiac ranked No. 9 in the 2022 MAAC Preseason Coaches' Poll after an 8-28 season last year.

Good teams don’t lose 14 of their last 16 games. The Quinnipiac Bobcats softball team didn’t have a 2021 season to remember on the diamond.

After repeatedly falling short in recent history, the Quinnipiac softball team looks to rebound and compete in the MAAC in 2022. Searching for its first winning regular season since 2012, it has a lot of ground to make up if it wants to catch up to the Manhattan Jaspers, the defending conference champions.

The Jaspers won’t face the Bobcats until April 10, but until then, the team has confidence that it will get off to a fast start.

Hillary Smith, who is in her fourth season as head coach, has made an instant impact on the team as a whole, said graduate student outfielder and infielder Kayla Jensen.

Smith, who holds a career record of 27-73 as the Bobcats’ skipper, has a solid cast to build around in her fourth year. Highlighted by 2021 All-MAAC Rookie Team sophomore infielder Kayla Thomas and junior infielder Cy Gonzalez, Quinnipiac should be a very good offensive team in the conference. Both Thomas and Gonzalez were some of the better contact hitters in their lineup last season, batting .269 and .296, respectively.

Some returning members who can help this team flip the switch are senior catcher Hannah Davis, junior outfielder Serena Fogg and junior pitcher Lala Pascual, who played on the Dominican Republic National Team before arriving at Quinnipiac. In a sport that requires a lot of leadership, the veterans of this program will be able to help turn the tides and fix some errors that cost them the previous year.

Losing 16 games by three or less runs, including five one-run losses, is something the team does not want to replicate. Senior infielder Bridget Nasir talked about how last year was just that — last year.

As the 46th edition of the Quinnipiac softball team takes the field in the spring, it will be a nice building block for what is hoped to be a promising future for the Bobcats.

Both Nasir and Jensen are adamant about looking forward and not focusing on the past, a theme both said is new this season. In other years, the program would tend to look back at the prior seasons and get stuck in their old ways. This year, a switch has been flipped, and the team has their sights set on 2022 and beyond.

Nasir, a California native, has been a solid contributor for the Bobcats in her first three seasons, totaling 45 hits and 36 walks in her Quinnipiac career. Although a career .183 hitter, she has been a threat to swipe bases, going 6-for-6 in attempts in 2021.

The Bobcats also welcome a solid group of freshmen who have already meshed extremely well with their teammates, something that Jensen said was not seen in years prior.

“They have such a personality,” Jensen said. “For where they’re at, a lot of them are really, really good.”

The group of newcomers, including pitchers Sydney Horan, Taylor Walton, Zali Adams, Jaclyn Gonzalez and utility Brooke Hilliard, are expected to contribute from the first pitch. These first-years can give the team some depth in the arm department, something they have struggled with in recent seasons.

Jensen, who began her collegiate career at the College of Central Florida, has been a consistent lead-off hitter for Quinnipiac. Her career-high 23 walks last season were a bright spot in the Bobcats’ lineup that did not have many shining moments. In three years, Jensen also has 28 career steals, adding another element to the team’s offense. In fact, she and Nasir were the only Bobcats to not be thrown out stealing all of last season.

The softball season starts with a 14-game road trip, with stops in Washington D.C., Nashville and Baltimore. The Bobcats will host their first home game against the Maine Black Bears on March 26. Just before conference play is the UMBC Tournament in Maryland on March 19-20 and that has the potential of being a jump-starter early on in the season.

“I’m just so excited to play everyone on our schedule,” Jensen said. “I don’t think they will know what hit them.”

After being ranked No. 9 in the MAAC to begin the collegiate season, the Bobcats clearly have a large chip on their shoulder as they enter the 2022 schedule. If Quinnipiac can back up their preseason confidence on the field, this has a chance to be an improved year for softball.