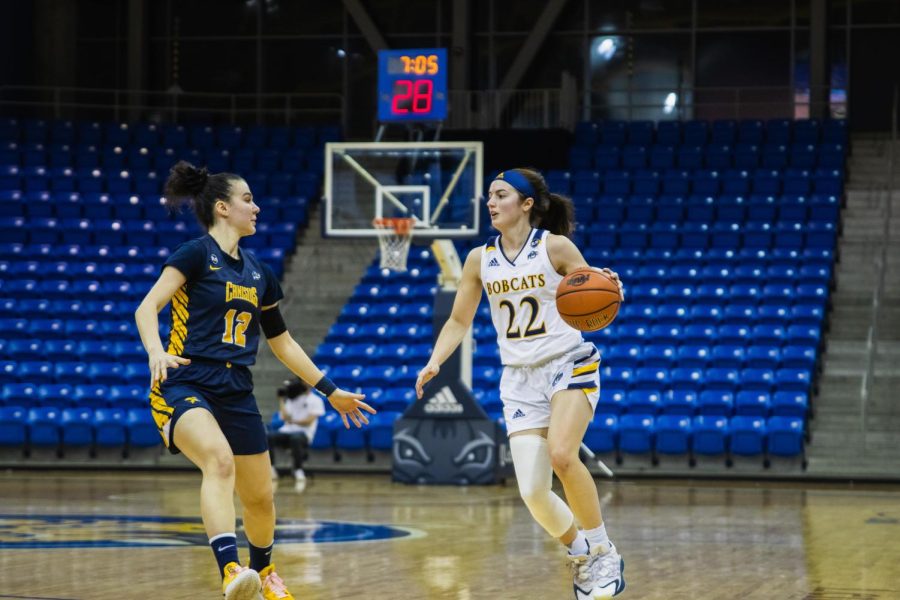 Mackenzie DeWees is averaging 14.4 points and 7.9 rebounds per game this season.

Despite losing on the road to the first-place Fairfield Stags on Thursday, the Bobcats bounced back against a formidable Niagara squad and ran away with a 76-57 victory. They’re now 18-1 all-time against the Purple Eagles.

DeWees, who only had seven points at halftime, said she felt like there was “a lid on the bucket.” Double-teams bottled her up in the first half, but a more multifaceted approach on offense in the second half led to an outburst. As junior forwards Mikala Morris (13 points, 13 rebounds) and Cur’Tiera Haywood (15 points) got more looks, DeWees took advantage and found enough space to shoot 53% from the field.

“Your best players have to play well if you’re going to win this time of year, and (DeWees) had some great opportunities,” Quinnipiac head coach Tricia Fabbri said. “She responded to (the loss against Fairfield) and that’s what great players do. She rang the bell and did it on both ends.”

However, that was the story of the second half. Quinnipiac tried to counter Niagara’s intense full-court press by taking the tempo up a notch and moving the ball faster in transition. However, the team was trying to play catch-up and sometimes overstepped. The starting lineup only shot 2-of-16 from the floor in the first half, and Niagara capitalized by racking up 14 turnovers in the first half.

“I thought in the first half, we just made one too many passes,” Fabbri said. “It looked like, ‘Just shoot it now like, you’re open now, not one more pass.’ That got us in trouble early in the game. We just were much more aggressive, played with a little more confidence and poise, and exhaled against their pressure.”

The Purple Eagles’ defense forced the Bobcats into passing situations they didn’t want to be in. Every inbound had to be precise, every cross-court pass had to be perfect, and every bounce pass around the defender from the elbow to the post had to be on the money.

Down six points at halftime, Quinnipiac returned from the locker room and played more of its own style of basketball.

DeWees found a lot more room underneath the basket, drew fouls and was a perfect 5-of-5 from the free-throw line. Morris stifled on the defensive end with four blocks and controlled the defensive glass.

“I felt a lot calmer (after halftime),” Morris said. “We just needed to take a deep breath and know that we had this, which we did, we were just rushing ourselves.”

Not to be lost among DeWees’ career day is Morris’ sixth straight double-double. She was matched up against Niagara junior forward Olivia Mason, who shot only 2-of-12 from the field. Morris had her number all day, forcing missed shots and collecting 12 defensive rebounds over her.

“It’s been a couple of weeks where she’s just exhaled, and everything just seems easier instead of the grind of wanting it so much,” Fabbri said.