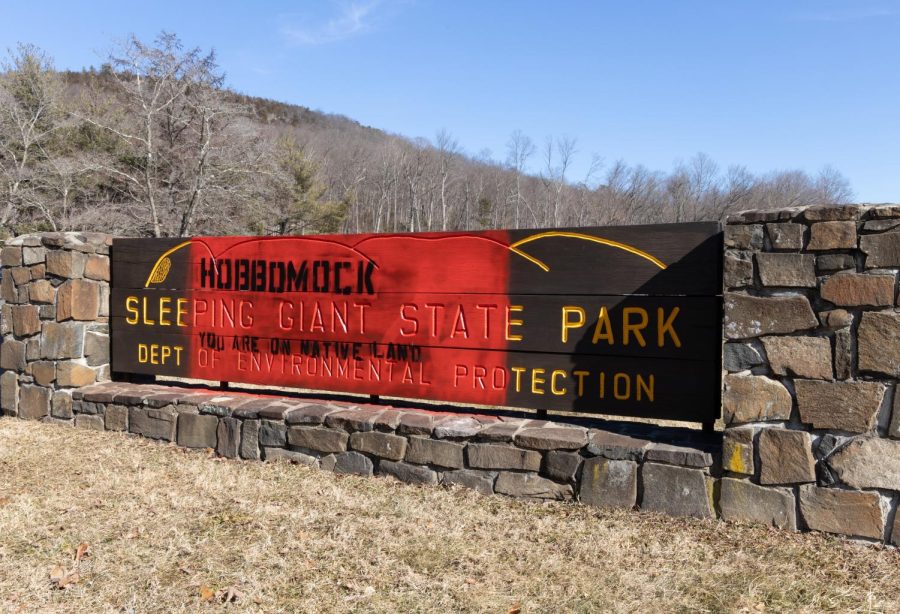 The entrance sign to Sleeping Giant State Park has since been taken down after it was vandalized Feb. 11.

The Sleeping Giant State Park entrance sign was reported vandalized Feb. 11, after it was painted red with stenciled black words reading “Hobbomock” and “you are on native land.”

There have been no charges or police record of the incident, according to the Hamden Police Department.

The wood sign, which is located in front of the park’s entrance and across from Quinnipiac University’s visitor entrance on Mount Carmel Avenue, greets all park visitors as they cross the foot of the giant. As of publication, Park Supervisor Jill Scheibenpflug said the vandalized side of the sign has been removed for repairs.

This incident comes a week after a separate incident at West Rock Ridge State Park in New Haven. On Feb. 8, state park officials found the entrance sign painted red with the original land’s name in black, similar to what occurred at Sleeping Giant.

“Last week, we went to West Rock Ridge for the same thing; same paint, same stenciled lettering,” said Patrick Kiely, a Department of Energy and Environmental Protection conservation officer.  “We are just trying to figure out who is (doing) it.”

Hobbomock is the name given to the giant in the legend passed down from the Quinnipiac people. The land is a sacred area to them and other Indigenous groups around.

Scheibenpflug, who has worked with the park’s system for 32 years, said this type of event was not a rare sight, but the severity was.

“We’ve had graffiti,” Scheibenpflug said. “Graffiti has been a problem forever. It costs a lot of money to get rid of it.”

In the morning of Feb. 11, public safety officers from the university and the DEEP arrived at the scene. Scheibenpflug said that the university’s security cameras caught the suspect in the act, but the footage proved to be inconclusive.

Scheibenpflug painted and put up the sign herself in 1988.

“I was annoyed. I made this sign,” Scheibenpflug said. “I just refinished it last year. I was not happy that this happened now.”

In response to the nearby vandalism, the university’s Indigenous Student Union released a statement Feb. 14, calling this an “act of protest.” The organization did not refer to it as vandalism and made it clear that no ISU members were involved.

“The Quinnipiac University Indigenous Student Union is taking this act of protest quite seriously and is deeply reflecting on the injustice that this act is highlighting,” ISU wrote in a statement released Monday. “We are critically thinking about how we can work towards being in better relations with Indigenous communities.”

While ISU does not have ties to the incident, the messaging of the vandalism resurfaces a more prominent issue regarding the university’s Indigenous roots.

Historically, the university has remained distant from the people who originated on its land. Seemingly small cultural footprints have remained, such as the plaque of the “Legend of the Bobcat,” which alters the traditional story of Sleeping Giant and removes the Hobbomock name.

Some students said they believe the university should be more connected to its Indigenous roots.

“I understand it,” said Anastasia Soteropoulos, a sophomore public relations major. “I see more of the campus being the issue. I don’t see why they protested that and not the campus too.”

One student said this action is a chance for the administration to recognize the university’s Indigenous background.

“It is a call to recognize the people that came before us,” said Brandon Assi, a sophomore biomedical sciences major. “It’s bringing awareness that we need cultural understanding … as if we are carrying on the (Quinnipiac) legacy.”