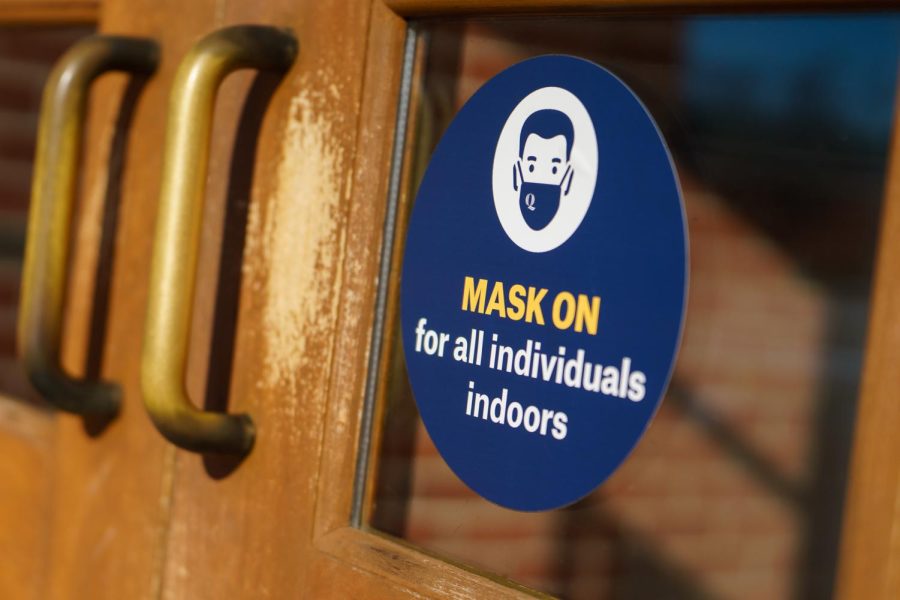 Dr. David Hill, senior medical advisor, said that the governor is leaving it up to schools to make their own decisions about masks. Hill said most of what the governor said doesn’t apply to private higher education.

“There’s going to be a lot of contentious discussions — battles so to speak — probably in many public school districts, and I’m sure their boards are meeting now to decide what they’ll do,” Hill said.

As a private institution, it will be Quinnipiac’s decision as to whether to keep the mask mandate or not. Hill said the university will also look to see what other Connecticut universities will be doing.

“We are actively discussing this now, we realize that asking students to wear masks in indoor spaces has been a challenge,” Hill said. “I’m sure if you go out into the hall now, you’ll realize that some students aren’t wearing masks in their dorm rooms, in their halls and I know it’s created a challenge for some (resident assistants) to try to continue to ‘police this.’”

Hill said that it is likely that Quinnipiac will maintain its policies until spring break.

The Chronicle conducted an online survey asking students whether or not they agree with the local changes and if Quinnipiac should keep the mask mandate or not.

Lisa Zarcone, a Quinnipiac mathematics professor and math teacher at North Haven High School, said she has mixed emotions about the mandate being lifted in local public schools.

“I think that it would be great to not have to wear them any longer just comfort-wise, and we’ve been doing it for so long,” Zarcone said. “But I’m also just nervous, I think working in a school with so many kids who are unvaccinated and usually the younger kids get sick a lot and they pass the germs on, so I think I’m hesitant to kind of go with that just yet.”

Zarcone said that she thinks it’s too soon to lift the mandate, although it will be hard to know when the right time will be.

“It’s a little too soon to do it now during cold and flu season in the winter, maybe waiting until the weather’s a little better and see how things go then,” Zarcone said.

Despite concerns about the lifted mandate, Zarcone said she thinks most students will be happy with the decision as they have been pulling down their mask or wearing it incorrectly in class.

“I think they’ll be a bit more comfortable, but I do worry about the kids who are more uncomfortable and maybe whose families want them to keep wearing a mask,” Zarcone said. “Then they become the one or two kids in the class that are wearing it, so I do worry about maybe bullying with that, and kids that are not really understanding of others choice to just still possibly wear one.”

“It feels a bit early,” Mariyappa said. “Kids are really good at spreading germs, but we’re all adults so I don’t see why there’s any reason we should stop (wearing masks).”

“I’m getting fed up, I mean I wear the mask not happily, no one does that,” Becker said.

However, Becker also said the mandate should be upheld because she has seen many people violating safety protocols on campus.

“The people here, they legit never wear their masks, so I don’t think we should yet,” Becker said. “… You just have to wear them for like 1-2 hours when you’re sitting here in the student center and class. I see people walking through the student center with no masks on and it really bothers me.”

Morgan Bloom, a sophomore political science major, said she thinks the spread of COVID-19 is still “a real thing.” However, she said students and staff are going to do what they want despite the implemented policies.

“At the same it’s not really going to matter what they end up doing because no one wears their mask anyway,” Bloom said. “I walk in here and see one (person) not wearing masks at all and two people wearing it incorrectly. Maybe half the time I see the staff wearing their masks so it’s not going to matter what the school does in the end because the students and the staff are just going to do what they want.”