As tensions rise in Ukraine, the US needs to step up 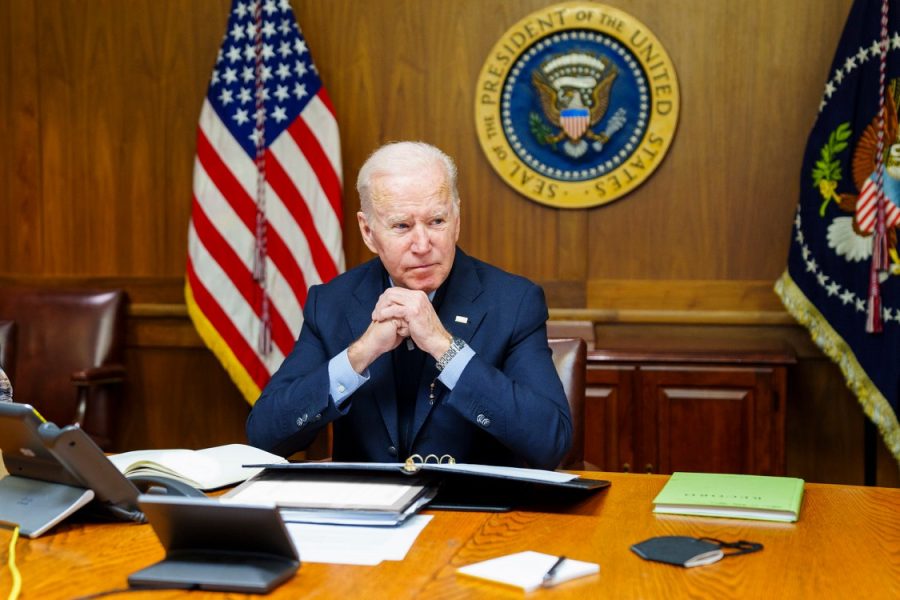 President Joe Biden sat at his desk at Camp David on Feb. 12. He spoke to Russian President Vladimir Putin that day, warning him that the U.S. would enforce severe consequences if Russia invades Ukraine. (Photo by The White House)

The Russians are on the brink of invading Ukraine, and the U.S. government appears to be unprepared.

Around 100,000 Russian troops are stationed at the Ukrainian border. The soldiers are equipped with heavy artillery, armored vehicles and tanks. At any moment, Russian President Vladimir Putin can give the order for the troops to invade and potentially begin World War III.

This is the culmination of continuous tension between Russia and Ukraine that has been ongoing since Ukraine gained independence from the Soviet Union on Aug. 24, 1991.

The world powers, specifically the U.S., do not have the suitable leadership to deal with a conflict of this stature. President Joe Biden constantly changes his stances on international conflicts, most notably taking troops out of Afghanistan in an unorganized manner after voting for the war as a senator in 2001. This weakens our allies’ trust in him as a leader and if Russia invades Ukraine, Americans are screwed.

So how did we get to this very moment?

Ever since Ukraine became an independent country, the Russian government has tried many methods to regain power over it. From allegedly poisoning a presidential candidate to the illegal annexation of the Ukrainian peninsula Crimea.

Russia’s annexation of Crimea was done to try to block Western energy companies from the natural resources that are located in the Black Sea. Today, the peninsula is one of the many locations where Russian soldiers are stationed around the Ukrainian border.

With Russian soldiers on the brink of invading Ukraine, where does the U.S. stand regarding this conflict?

Well, Biden does not know.

Biden suggested that the U.S. would not involve itself in the matter if a small conflict occurred.

“Russia will be accountable if it invades and it depends on what it does, it’s one thing if a minor occasion and we end up having to fight about what to do and not do,” Biden said.

Days later, Biden tried to clarify his statements and said any form of invasion will cause severe consequences for the Russian government.

Since Russia’s annexation of Crimea in 2014, the U.S. and its European and G-7 partners have imposed sanctions on Russia. Even after these consequences, the Russian government has shown that nothing is going to hinder them from rebuilding the Russian empire.

Though it seems like there is no other option than a world conflict, a world war is not the only answer.

If Russian soldiers invade Ukraine, the American government should not declare war immediately. In both World Wars, the U.S. stayed out of the fighting and instead funded its allies who were in battle. The country entered war once American citizens were attacked. Declaring war right away would be impulsive. However, changing stances on whether you would act or not is worse.

Instead of backtracking on previous comments, Biden can look to fund Ukraine with artillery if Russia invades, and he can make sure no other world power joins forces with Russia, especially China. Russian and Chinese forces banding together would be detrimental to any country fighting against them. The U.S. has one of the strongest militaries in the world, but its forces do not have the capabilities to fight them both. The American government should look to better Chinese relations and make sure that if Russia does invade, the Chinese government does not intervene in support of the Russians.

The issue with Biden is that we do not know whether he is going to make the right decision or not. With his approval rating continuing to plummet, Biden has shown he is not fit to run a country, let alone during a world war. BBC News reported that French President Emmanuel Macron believes an agreement to prevent war in Ukraine is within reach. We must hope that this conflict does not worsen.