Fast-pace or slow-and-steady? How the Rams and Bengals constructed their Super Bowl rosters 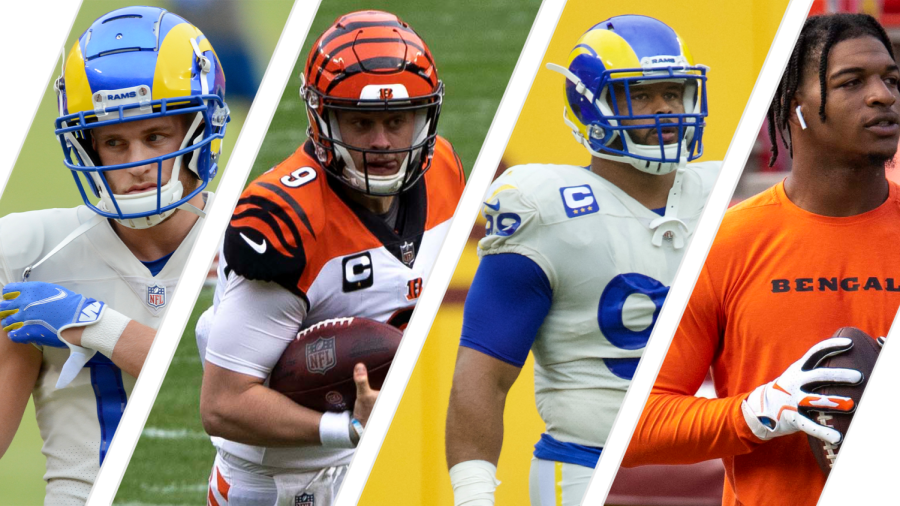 The Los Angeles Rams and the Cincinnati Bengals are preparing to play on the NFL’s biggest stage in the 2022 Super Bowl. A win would mean the end of a long championship drought for either franchise. However, both teams’ journeys to this game show interesting philosophical differences in running an NFL organization, and how to build a Super-Bowl-contending roster.
Cincinnati Bengals
The Bengals, who prior to this season hadn’t won a playoff game since 1991, have made it to this point by taking a more fast-paced approach that prioritizes the quarterback as an early acquisition when building their roster.

They had key offensive playmakers already in place such as tight end C.J. Uzomah, wide receiver Tyler Boyd and running back Joe Mixon. But the franchise’s turning point began in the 2020 NFL Draft.

With the No. 1 pick that year, the Bengals selected Heisman Trophy and National Championship winner, LSU quarterback Joe Burrow. Despite Burrow having a solid rookie year in the 2020 season before a season-ending ACL tear, the Bengals still won four games, however in just one offseason they would rise from worst in their division to the  first.

Cincinnati would spend that offseason patching up its 22nd-ranked defense by signing defensive end Trey Hendrickson to add to the defensive line, along with help in the secondary with cornerbacks Chidobe Awuzie, Mike Hilton and Eli Apple. But arguably their biggest upgrade came in the 2021 NFL Draft when they selected Joe Burrow’s former LSU teammate, wide receiver Ja’Marr Chase.

Chase quickly became the team’s No. 1 pass catcher with 81 receptions for 1,455 yards and 13 touchdowns. In the just span of two seasons, the Bengals were able to find their franchise quarterback and then fix the remaining holes on their roster to go from 4-11-1 in 2020, to 10-7 in 2021, one win away from the Lombardi Trophy.
Los Angeles Rams
The Rams, on the other hand, took a slow-and-steady approach, opting to fill the surrounding holes on the roster first before finding a talented veteran quarterback, in the hopes of finally getting over the hump.

Their first franchise cornerstone was drafted in 2014 when the Rams selected defensive tackle Aaron Donald with the 13th overall pick. Donald has had an illustrious career, being an eight-time Pro Bowler, seven-time All-Pro and a four-time AP Defensive Player of the Year.

Over the next years, the Rams would continue to add key pieces to the roster, such as offensive wunderkind Sean McVay as head coach, tight end Tyler Higbee, offensive tackle Andrew Whitworth who spent 11 seasons with the Bengals, wide receiver Cooper Kupp, running back Cam Akers and cornerback Jalen Ramsey all from 2016 to 2019. They made a Super Bowl appearance during that time, losing to the New England Patriots 13-3 in the 2018 Super Bowl.

Knowing they needed to add firepower at the quarterback position, the Rams’ front office responded in 2021, sending two first-round picks, a third-round pick, and quarterback Jared Goff to the Lions for quarterback Matthew Stafford. Finally, in order to complete the roster and keep their new quarterback comfortable, they signed wide receiver Odell Beckham Jr. as an extra weapon on offense, while trading for Von Miller on defense. The slow and steady approach may have taken a longer time to develop, but the Rams also find themselves on football’s biggest stage this Sunday.
Which is better?
While both strategies can be effective ways to build a Super Bowl-winning roster, the Rams’ strategy provides more longevity and sure-shot chances to win a ring than the Bengals fast-paced one to two-year turnaround.

While one could argue quarterback is the most important position in football, it is the ultimate team game. When looking at both teams playing this Sunday, every unit has playmakers.

Let’s start with a defensive comparison. The Rams’ defense is led by arguably the best defensive lineman and cornerback in football in Donald and Ramsey. Both were acquired years before finding the final piece. When a team is able to build its roster around franchise-setting players like those two, it is able to have a more established and stable roster over time. Having this means more long-term success for a team, and the longer you have that the more chances you have at winning a ring.

Meanwhile, the Bengals fixed their defense with the major signings stated above, which played a big part in their one-season turnaround. That’s not to say this method cannot be successful, but one could question the sustainability of a roster like this.

Hendrickson came over from New Orleans after previously only having one season with double-digit sacks. Apple came to Cincinnati after being on three other teams in the past five seasons.

Many of these signings aren’t necessarily bad players, but they weren’t cornerstone players. A team operating under this philosophy is betting on many of its big signings to have career years, and when it all comes together, it leads to a season like Cincinnati’s. But will this team look the same next year?

Will these same players be able to keep up the pace they’re playing on? This is a big question that you don’t normally ask about teams like the Rams.

Based on recent history and the philosophy behind building a roster, the Rams’ method has provided frequent success in the past and could give them the edge in the Super Bowl.

But as hall of famer Shannon Sharpe once said, “History doesn’t play football.” For just one game on one given Sunday, anything could happen.