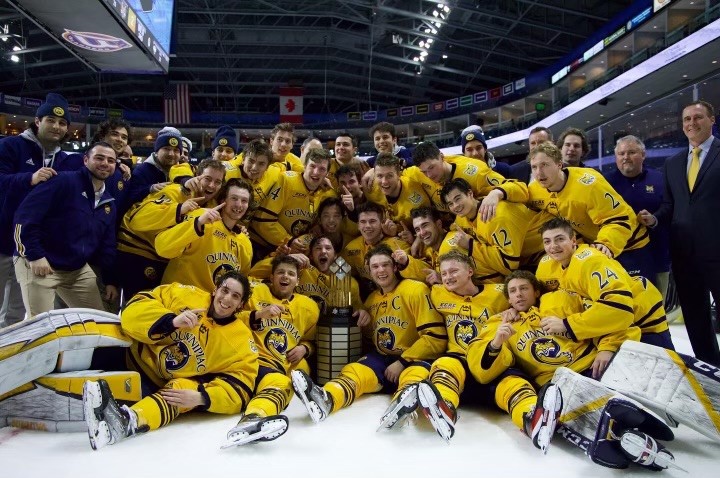 The Quinnipiac Bobcats captured the second-ever CT Ice championship after wins over Sacred Heart and UConn.

Senior centerman Desi Burgart broke a scoreless tie with under 10 minutes to play and freshman goaltender Yaniv Perets stopped all 29 shots he faced en route to a 2-0 Quinnipiac victory in the CT Ice Tournament championship.

This win comes two years after the Bobcats crashed and burned in the championship game of the inaugural tournament, falling 4-1 to Sacred Heart.

“It feels great. (We’re) on top of Connecticut,” Burgart said. We had a bit of a bad taste in our mouth after our sophomore year coming in and losing to Sacred Heart. It was a big goal of ours coming in this year, especially for us seniors, it’s our last chance to win it.”

With a trophy on the line, both teams came out flying to start the first, moving the puck well north to south, but the majority of the scoring chances went to UConn. Most notable was Huskies’ senior centerman Jáchym Kondelík, whose hustle plays sparked their offense throughout the period.

Perets was a brick wall for the Bobcats in the opening frame, stopping all eight UConn shots, including consecutive point-blank looks from senior winger Carter Turnbull in the final minutes.

The second period saw Quinnipiac muster a stronger offensive attack, managing 10 shots on net while controlling play in the o-zone for long stretches of time. But after 40 minutes, the game was still knotted at zero goals apiece.

Midway through the period with the left side of the Quinnipiac net wide open as Perets scrambled to recover, junior winger Guus Van Nes sacrificed his body to block a shot that kept the game even. Van Nes also drew two penalties on the afternoon, giving the team both of its man-advantage opportunities.

“He was really good,” Quinnipiac head coach Rand Pecknold said. “That whole line with Guus, Skyler and Chau, and then Mendel and Lee on the back, they matched up almost the whole game against the Kondelík line and did a really good job.”

The Bobcats’ power play, which has struggled throughout the season, showed promise in their only opportunity of the period. They moved the puck well around the outside of the zone and generated several quality chances, including a one-timer from senior centerman and captain Wyatt Bongiovanni that was ripped off the near post.

The opening 10 minutes of the final frame saw a continuation of the competitive back-and-forth play that had defined the first two periods. That was until sophomore winger Ty Smilanic cut down the right wing and put a shot on net that was driven home by Burgart.

“I looked up, their D kind of pushed over to me and I saw Ty, he’s got a lot of speed and I just kind of gave it to him and followed up on the play and luckily it went in,” Burgart said.

Quinnipiac nearly doubled its lead moments later, when senior winger Ethan de Jong redirected the puck across the top of the crease off a back boards rebound reminiscent of a passing play popularized by former Vancouver Canucks superstars Daniel and Henrik Sedin.

de Jong wouldn’t be silenced however, as he would pot an empty-net goal with less than a minute remaining to seal the Bobcats victory.

“It was a really even hockey game,” UConn head coach Mike Cavanaugh said. “Hats off to their goaltender, I thought he was terrific. He made some big saves when he had to, and it was a great hockey game between two good hockey teams. Congratulations to Quinnipiac.”

Perets, who Cavanaugh praised, was named the tournament MVP for his shutout performance in the championship game. This shutout, his ninth of the season, put the Quebec native in sole possession of the Quinnipiac single-season shutout record, passing Michael Garteig (8) who set the previous record in the 2015-16 season.

The Bobcats head back to Hamden to start a three-game homestand next Friday night against a Union team in turmoil. The Dutchmen were in the news this week after head coach Rick Bennett resigned following an allegation about his “coaching style and practices.”