No. 2 Quinnipiac nearly falls face first but pull out a win in the CT Ice opener 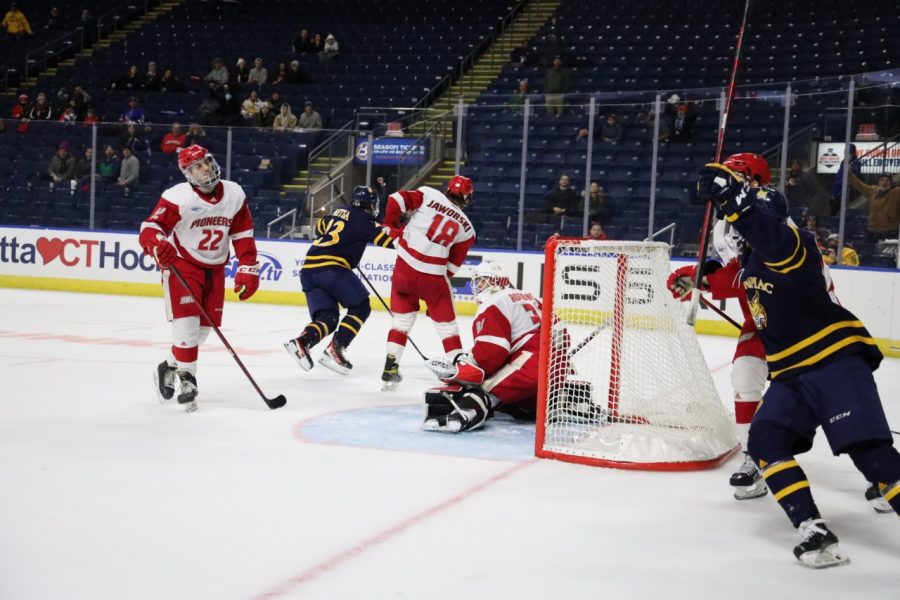 Zach Metsa taps in the overtime winner over Sacred Heart

It was not pretty, but the Quinnipiac men’s hockey team ultimately came out on top against the Sacred Heart Pioneers in overtime 3-2. A slow effort out of the gate continued throughout, and a slew of turnovers led the Bobcats to the brink of elimination. However, they now advance to tomorrow’s championship matchup against UConn.

Graduate student goaltender Dylan St. Cyr was in net for the Bobcats (20-2-3), stopping 22 shots in the effort. Across the rink for Sacred Heart (9-12-3) was junior goaltender Justin Robbins, who was having one of his best games of the season before the Quinnipiac comeback.

The first period was filled with many defensive stops and failed offensive rushes by both teams. Quinnipiac had numerous opportunities for a stretch pass, but instead opted for the shorter zone pass, limiting its offensive push in the first 20 minutes.

Cipollone spoke to SNY’s Michelle Margaux between periods about his fifth goal of the season and how it can spark the team in the second and third periods.

“Playing to our identity, winning a battle … luckily the puck hit my stick, and I was able to put it home,” Cipollone said. “We will be better in the next two periods.”

The second period began exactly where the first left off: an array of stick checking and not enough body checks by either side. Physicality took off halfway through with three penalties called in a brief span. Numerous scrums and one-on-one jawings led to some short leashes by the referees, including an interference call on graduate student forward Oliver Chau.

The Bobcats’ constant pressure was a constant theme from the get-go but lacked finishing chances. An odd-man rush would result in either a stolen puck or a missed shot wide, keeping Sacred Heart in the game. A set-up pass from senior defenseman Zach Metsa to senior forward Desi Burgart was just wide of the net, perfectly encapsulating Quinnipiac’s offensive attack through 40 minutes.

The Pioneers found the back of the net early in the third with junior forward Neil Shea grabbing the loose puck from behind the net and shooting it past St. Cyr’s right shoulder, evening the score at one apiece. Just minutes later, graduate student forward Dakota Raabe led an odd-man rush after an errant puck struck a referee, and hit twine, taking the lead from Quinnipiac.

The Bobcats pulled St. Cyr and following a near miss by the Pioneers, Cipollone netted a career-high with two goals in the game, tying it at two apiece with just over a minute to go. The Quinnipiac bench erupted, and the goal sent the game into overtime.

With just over a minute left in overtime, a pass from Chau set up Hobey Baker Award nominee Metsa to tip the puck past Robbins and push the Bobcats into tomorrow’s championship.

The Bobcats will now go up against the UConn Huskies Sunday at 4 p.m. in the championship game, with Quinnipiac becoming the only team to reach the finals in back-to-back tournaments. After the tournament, the No. 2 Bobcats will return to Hamden to host Union Feb. 4.