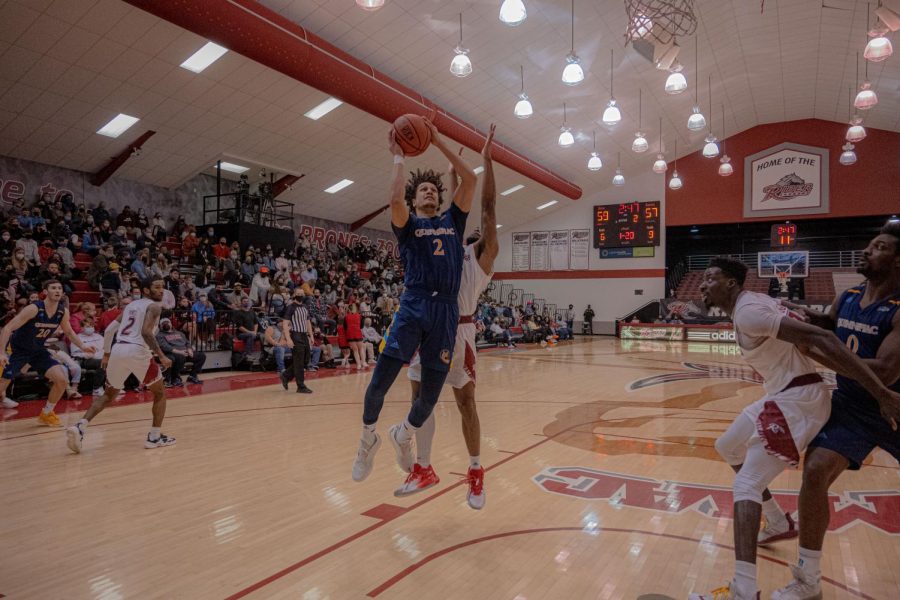 The Bobcats snapped their skid of back-to-back losses with an overtime win against Rider.

Looking to shake off the bad energy that arises amidst a two-game skid, Quinnipiac men’s basketball (8-6, 3-3 MAAC) entered its game against the Rider Broncs (5-9, 1-3 MAAC) as men on a mission, carving out a gritty overtime win 77-70.

The Bobcats began the game seemingly haunted by the demons of their previous two losses, allowing the Broncs to take a 12-0 lead in the first five minutes of play. After a 3-point basket by sophomore guard Tymu Chenery put Quinnipiac on the board with 14:44 left in the first half, the Bobcats’ began to showcase the resolve the team can muster.

“We just tried to stay calm in the huddle and address a couple issues that we thought were going on,” Quinnipiac head coach Baker Dunleavy said. “We haven’t gotten off to great starts. We’re still working on that. But I think we did a good job keeping our composure and had a really good huddle. Nobody was panicking.”

The Quinnipiac offense flaunted its ability to take advantage of the 3-point arc, with two shots from senior guard Tyrese Williams and another from redshirt junior guard Matt Balanc being crucial to the Bobcats’ erasure of the Broncs’ lead. While his time on the floor was short, redshirt sophomore forward JJ Riggins’ athleticism in the paint balanced out the Bobcats’ offensive approach, leading to Quinnipiac tying the game at 24 with 3:20 left in the first half.

Rider did not let Quinnipiac dash its spirits in the first half however, as the Broncs closed out the opening frame on an 8-2 run, punctuated by a 3-point basket made by senior guard Jeremiah Pope. That shot gave Rider a 32-26 lead heading back into the locker rooms.

As the second half began, the gears within Quinnipiac graduate student forward Jacob Rigoni’s shooting fingers found their groove. In a 28-second span, Rigoni tripled his point total from the first half, hitting 3-pointers on back-to-back trips up the floor for the Bobcats, tying the game at 32.

The second half became a battle of runs for each side. An 11-2 run to begin the frame gave Quinnipiac a 37-34 lead, but after seperate Bronc runs of 8-0, 4-0 and 5-0 led by forwards junior Mervin James and graduate student Dimencio Vaughn, the Bobcats found themselves trailing 55-47 with less than six minutes left in regulation. Vaughn finished with the game’s only double-double, knocking down 13 points while also collecting 10 rebounds.

Within those runs, the Bobcats did not seem to be playing with the same type of confidence they were used to, and instead looked desperate for their chance to come out with a win.

Quinnipiac fought back with runs of its own. A 5-0 run brought the Bobcats within striking distance at 55-52, and a Rigoni 3-pointer from the top of the key brought the game even at 57. The Bobcats later took only their second lead of the game with 1:31 left in regulation off two made free throws from junior guard Brendan McGuire, putting Quinnipiac up 61-59.

The lead did not hold, however, as a foul by Quinnipiac graduate student forward Kevin Marfo allowed Rider to tie the game off free throws of its own. After Rider stopped Quinnipiac on its next trip up the floor, the Broncs had a chance to end the game in regulation. Their prayers went unanswered as the game-winning 3-point shot attempt from Pope clanked off the back half of the rim, sending the game to overtime.

The first three minutes of the overtime period exemplified competitive basketball. The Broncs took a 64-61 lead after junior guard Allen Powell connected on a 3-pointer, but the Bobcats immediately responded with sophomore guard Dezi Jones hitting a timely three of his own.

The teams would trade buckets back-and-forth until a layup from Balanc put the Bobcats up 72-68 with 1:05 left, giving them the lead for good. Quinnipiac added more points after intentional fouls by Rider, giving the game a final score of 77-70.

The overtime win was Quinnipiac’s first-ever in Rider’s Alumni Gymnasium. Prior to the matchup, the Bobcats were 0-8 all-time against the Broncs on the road.

“I did not know that,” Dunleavy said. “I knew this was my first one because this is a really tough place to play … There’s a reason that record existed, and a lot of that is because of how good Rider has been over the years. So, for us, especially in overtime to gut it out the way we did after going down early. It says a lot about the character of our guys.”

Quinnipiac will look to continue this momentum going forward as it heads home to face the Fairfield Stags at 2 p.m. on Sunday, Jan. 16. With the MAAC Tournament steadily approaching, there are still improvements for the Bobcats to make if they want to prove their worth within the conference.

“I think it’s just gradual improvement,” Dunleavy said. “You know, this time of year, you don’t get to practice as much as you’d like. So we have to use the games and the practices to get better, but it’s not gonna all happen overnight. It has to be incremental, very gradual, two steps forward, one step back.”