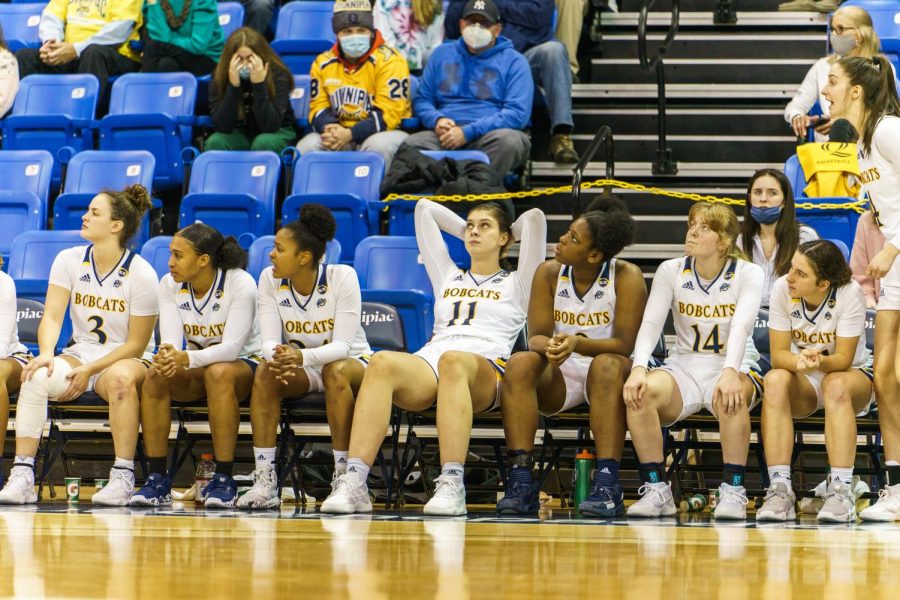 Quinnipiac made 1 of 11 shots from beyond the arc in its loss to Monmouth and has now lost three of its last four games.

Quinnipiac’s biggest strength as a team this season has been its 3-point shooting. Entering tonight’s game against Monmouth, the Bobcats had the highest 3-point shooting percentage in the MAAC (35.7%) and averaged the second-most 3-point makes per game (6.9).

Monmouth knew of the Bobcats’ shooting proficiency and did the best job of any team so far this season in making 3-point shooting difficult for Quinnipiac.

In the Bobcats’ 70-60 loss at home, they shot 1-11 from 3-point range. They finished with their worst 3-point shooting percentage and the fewest 3-point makes this season. The last time the Bobcats made only a single 3-pointer in a contest was 11 months ago on Feb. 6. The culprit in that match: the Hawks of Monmouth.

Both Quinnipiac (6-6, 1-2 MAAC) and Monmouth (7-4, 2-0 MAAC) came off 16-day hiatuses due to game cancellations from COVID-19 protocols. While rust can be attributed as part of the reason for Quinnipiac’s putrid shooting, Monmouth must be given credit for its perimeter defense. The Hawks entered tonight’s match with the best 3-point field goal percentage defense in the conference (26.5%).

The biggest factor in the Bobcats’ shooting woes from 3-point land was simply the lack of attempts they had from deep. Many of the clean looks they were accustomed to seeing from beyond the arc were nonexistent tonight.

The Bobcats averaged 19.3 attempts per game from beyond the arc entering this contest and finished with only 11 3-point attempts against the Hawks, which was tied for the fewest it has had this season. The other game Quinnipiac had this few 3-point attempts was its season opener on the road against Fordham.

The lone 3-pointer for the Bobcats occurred at the 2:17 mark in the third quarter, made by junior forward Cur’Tiera Haywood. The Yukon, Oklahoma native drilled a 3-pointer in transition trailing behind her teammates and finished with 16 points and went 5 for 6 at the free-throw line.

As for Monmouth’s offense, it was in a groove from the start. The Hawks made all three of their 3-pointers in the first quarter and ended the game shooting 9 of 15 from deep. This tied for the most 3-pointers it’s made in a game this season and is the highest 3-point shooting percentage it had this season. The genesis for the majority of the 3-point opportunities for the Hawks came from pushing the ball with pace after missed shots and turnovers on Quinnipiac’s end.

Quinnipiac’s shooting struggles were also felt on the free-throw line. The team went 7-14, good for its lowest percentage from the charity stripe this season.

While many things offensively did not go Quinnipiac’s way, the Bobcats held a lead for nearly half the game (19:07) as well as showed some flashes of clean offense. Senior guard Mackenzie DeWees contributed to most of these bright spots, serving as the biggest reason Quinnipiac had a chance to win this game.

The 5-foot-9 star guard finished with a team-high 20 points on 9-14 shooting, 11 rebounds (five on the offensive end), four assists and five steals. DeWees played excellently, showcasing her footwork around the basket, her deft touch on scoop lay-ups and her preternatural ability for pilfers. Her 2 of 6 shooting from the free-throw line was the only real downside of her performance.

DeWees dueled with Monmouth’s best player, graduate student guard Stella Clark. The 5-foot-4 graduate transfer from Northeastern leads the Hawks in points, rebounds, assists and steals and came off her best game as a Hawk in their last game — a 27-point performance against Iona. Tonight, she continued her strong play, scoring 20 points on 3 of 5 shooting from beyond the arc, four assists and four steals.

Even with the poor shooting, the Bobcats entered the third quarter ahead 52-47. However, their hopes of winning were thwarted at the outset of the final period where they were outscored 23-8.

Having lost twice at home, Quinnipiac now has its second two-game losing streak of the season. It will look to snap that streak Saturday, Jan. 8, when the Bobcats face the winless Siena Saints (0-9, 0-1 MAAC).