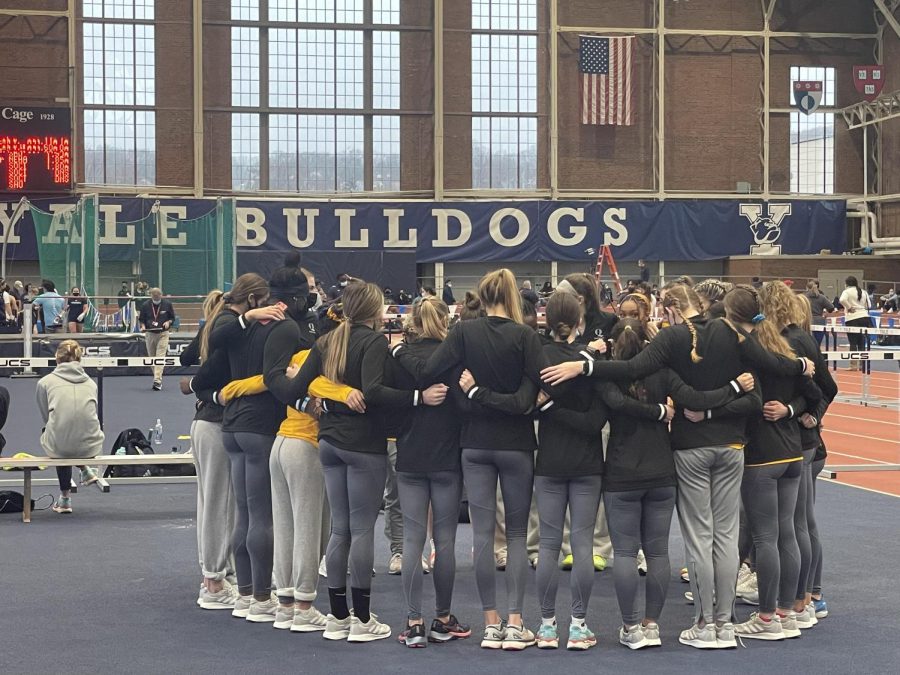 It was a rainy Saturday in New Haven, but Quinnipiac indoor track & field still found a way to shine. The Bobcats won three events and podiumed in several others in the team’s second meet of the season on Dec. 11.

“The team did really well today,” senior Symone Foster said. “It was nice to get out here, it was a rust buster. Usually we only have one meet in December, but this year we were able to get in two so we definitely had a good start to the season.”

Graduate student Mikah Maples kicked off the day for Quinnipiac with a third-place performance in the shot put. Maples, the school record-holder in the event, earned her spot in the finals with a 12.62-meter opening throw, and then secured a podium finish with a 12.88 sixth attempt. It’s a new season-best for the Moweaqua, Illinois, native, throwing .02 further than she did last week at the Sharon Colyear-Danville Season Opener hosted by Boston University.

In the long jump, the Bobcats played bridesmaid once more, as senior Kalli’ana Botelho and junior Zekiah Lewis finished second and third in the event with jumps of 5.34 and 5.33 meters, respectively.

Minutes later, Botelho bounced back to place second once again in the high jump with a 1.64-meter clearance, held from victory by Yale sophomore Abrianna Barrett, who jumped one height higher at 1.68.

Finally atop the podium, sophomore Alyssa Romagnoli brought in Quinnipiac’s first win of the day in the 300 meter. Trailing with 100 meters to go, Romagnoli surged around the final turn and used every last bit of energy to outdip Yale sophomore Sydney McCloud at the line. It’s the Bobcats’ second straight win in the event, as a school-record setting performance from senior Aisha Gay was enough to take the crown at Boston University a week ago.

Quinnipiac first-seeded sophomore Asia Mercier looked to challenge in the 800 meter. However, Hartford junior Haleemot Adeyanju took the lead from the gun and never relinquished, leaving Mercier and graduate student Brooke Hagen to battle it out for the second and third positions.

Switching gears to the middle of the track, Foster ran away with the 60-meter hurdles, handedly winning the preliminary before dominating the final with a near half-second victory, running a time of 8.69 seconds.

“In the prelims I just wanted to get out there, try to get a good start and focus on getting to the finals,” Foster said. “When the finals came around, we had a few empty lanes, but my main focus was just to try to get out of the blocks well and just try to finish as best I could.”

Back on the infield, another record-breaking Bobcat asserted her dominance, as graduate student Britney Del Mundo took home the crown in the triple jump with an 11.52-meter fifth attempt. Del Mundo broke the school record in the event at Boston University in January 2020, jumping half a meter further than she did today.

The 4×400-meter, the final track event of the day, looked like a lost cause until senior Aisha Gay took the baton as the team’s fourth leg. Gay quickly ate up the wide gap between Quinnipiac and Yale’s “A” and “B” squads, passing the latter on the third corner of the first lap. However, she couldn’t make up enough ground to catch Yale senior Libby McMahon, who had won the open 60m dash earlier in the day.

The Bobcats won’t be back in action for another month, when they head to Kingston for the URI Invitational. Despite this extended break, they already have their eyes set on the postseason.

“Obviously, we all want to PR, but really we’ve just trying to get that MAAC title and place as high as we can,” Foster said.