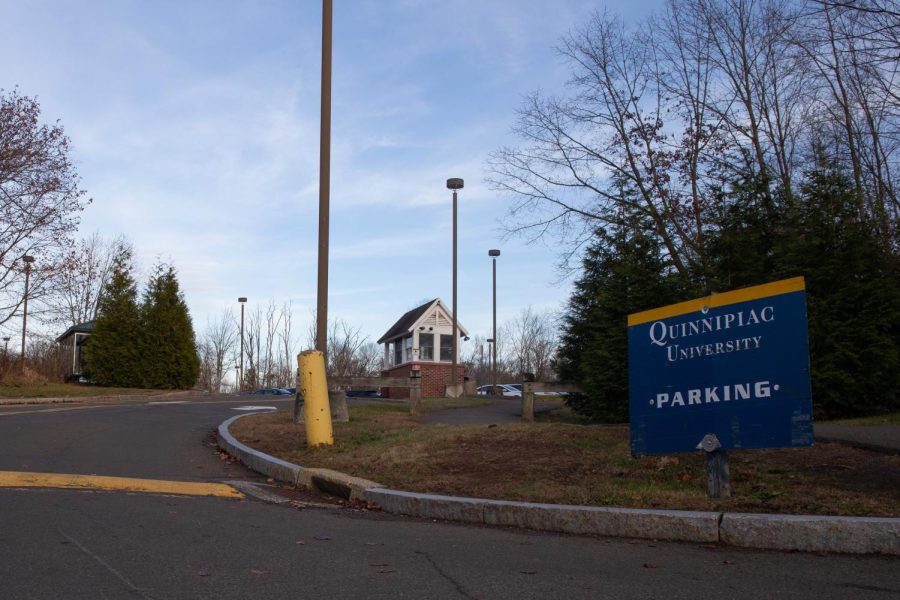 Officers shortages have impacted staffing at several locations, including Hogan Lot, which is the primary spot for delivery and carpool services.

Quinnipiac University Public Safety Department’s officers had a total of 154 overtime shifts in November due to staff shortages and the departure of several officers in recent months.

Michael Romano, vice president of the Public Safety Officers Association, told The Chronicle those shifts did not include hours at sporting events.

“Almost every shift resulted in the officer working a 16-hour day,” Romano said. “If the university was not shut down for Thanksgiving week and a skeleton staff were used, all the numbers would have been higher.”

While Romano said the ideal number for active public safety officers is 65, Quinnipiac only has 38 officers – excluding administrative and supervisory positions – to patrol all three of Quinnipiac’s campuses, as of Dec. 2.

Chief of Public Safety Tony Reyes confirmed officers work up to 16-hour shifts depending on the need, but they typically work 8-hour shifts. Reyes told The Chronicle the department has 10 vacancies for both armed and unarmed officers.

“We are actively recruiting to fill all current open positions within the Public Safety Department,” Reyes said. “As chief, I am constantly assessing the department’s long-term resource needs to support the safety and security of our university’s operations and its students, faculty and staff.”

If those 10 vacancies are filled, the total number of officers at Quinnipiac will go up to 48. However, prior to the unionization of the officers in 2015, the department had 75 non-administrative officers.

“Since the PSOA was formed, it appears the university has allowed our numbers to purposely dwindle, as the campuses (and) enrollment have gotten bigger,” Romano said.

Associate Vice President for Public Relations John Morgan did not make any current public safety officer available for an interview about their work conditions.

Reyes was going to conduct a full department-wide audit to determine the appropriate staffing level and ways to be more efficient, as The Chronicle reported in October. Reyes said the assessment is still ongoing.

The staff shortage has impacted campus patrolling. Several locations, including Hogan Lot, are no longer staffed during evening and midnight shifts, Romano said. Hogan Lot is the primary lot for students’ use of carpool and delivery services on the Mount Carmel campus.

“We all attempt to perform our jobs to our fullest, however officers working 16 hours a day, with some working 40 hours extra a week, may cause us to not be as sharp as usual,” Romano said. “At the end of the day, we are all human.”

A 2012 study shows that fatigued officers tend to sleep on duty, make mistakes on departmental paperwork, have difficulty in communication with supervisors and are more likely to be in on-duty accidents.

Public safety officers are assigned to work at the main entrances of the Mount Carmel and York Hill campuses and desks at the law and medical schools at North Haven campus. They also patrol all areas on three campuses in patrol vehicles.

“While some lots do not have public safety officers staffing the gate, officers and supervisors routinely patrol these areas, especially at night and on the weekends,” Reyes said.

With recent incidents including multiple break-in attempts at off-campus housing, catalytic converter thefts and vandalism, students became more concerned about their safety and security on campus.

The Public Safety Department has been losing its officers in the past months. As The Chronicle reported on Oct. 21, there were 43 officers. Romano later told The Chronicle that two officers left their non-administrative positions on Oct. 31, and another three left on Nov. 17.

“Pay and new policies have contributed to many departures,” Romano said. “I can tell you that many officers that have been here in a full-time capacity are not even making a $20 an hour base pay.”

Morgan did not make anyone in Human Resources available for comment. However, the latest collective bargaining agreement between the university and the union that began February 2021 shows that the pay rate for unarmed officers starts at $15 and $21 for armed officers.

Unarmed officers would be making $18 an hour five years after hiring, $23.52 for armed officers, according to the same agreement.

Reyes said recruitment and retention in policing and in public safety have been challenging across the country in recents.

“We continue to attract great talent to the university, and I’m proud of the public safety officers currently in our department and how strong their commitment is to serving our students and the university community,” Reyes said.