‘She’s 100% more confident in herself and such a strong player’: Inside Mikala Morris’ explosion from tentative freshman to MAAC Defensive Player of the Year 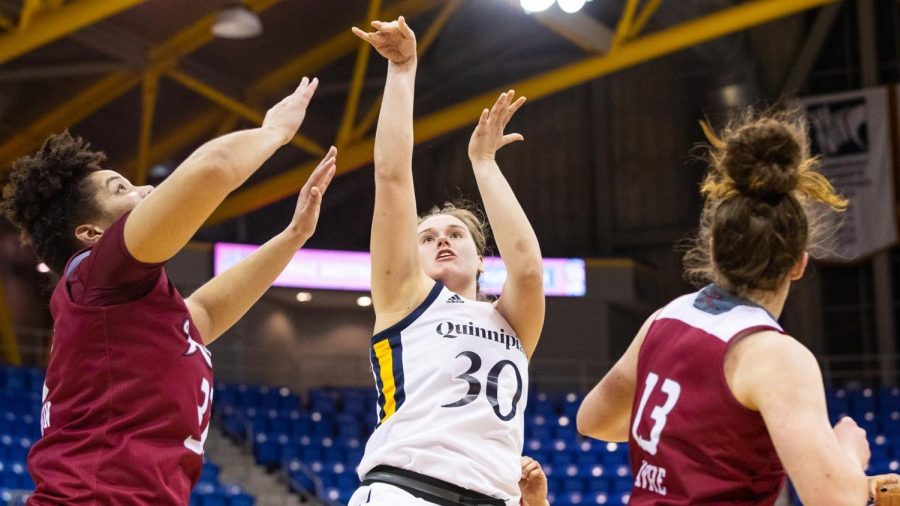 Over 650 miles from her hometown of Springfield, Ohio, junior center Mikala Morris built herself a new foundation in basketball at Quinnipiac with the help of head coach Tricia Fabbri.

“I wanted someone who I could really learn from,” Morris said. “She’s just an awesome lady to play for.”

The Bobcats’ starting center averages 9.3 rebounds per game — good for fourth in the MAAC — and her 12.3 points per game places her as the team’s second-leading scorer. She had early success in her career, starting the majority of games since her first year.

While Quinnipiac felt like the right fit, Morris needed guidance from older players to adjust to the collegiate game.

“It was definitely a shock in the beginning,” Morris said. “I played with Paige Warfel and Jaden Ward, and they were very good senior players. They pushed me every single day in practice.”

Fabbri noticed Morris’ potential through her willingness to improve as a player.

“She got here, and she was the talent plus the person,” Fabbri said. “She just has a work ethic to get better. She was able to come in and have a great knowledge and understanding to want to make an impact when she arrived on campus. From day one, she had the ability to come in and do that.”

Being surrounded by upperclassmen fueled Morris’ drive to grow as a player, but she was intimidated by them. However, the supportive team dynamic soothed her anxieties.

“They were all really welcoming and when you’re coming in as a freshman, you’re kind of scared that they’re going to be rude and they’re not going to want you to outperform them, but every day is a competition and no one cares who wins as long as someone does,” Morris said. “They don’t care if you’re a freshman beating a senior or a senior beating a freshman, as long as someone gets the job done, it’s good.”

Senior guard Rose Caverly transferred to Quinnipiac at the same time that Morris joined the team as a freshman, sparking the beginning of a close friendship. Caverly recognized how hesitant Morris was at first, but how she has grown since then as well.

“I think that she lacked the confidence that she has in herself now on the court,” Caverly said. “She was a little tentative because she was a freshman, and now she’s 100% more confident in herself and such a strong player.”

Once Morris realized that her teammates were there to support her, she hit the ground running. Adjusting to the team’s drills and dynamics led to her feeling better about her game.

“As soon as I got (confidence), I was more consistent towards the end of my freshman year,” Morris said.

Her sophomore year, Morris broke out. She made the All-MAAC First Team and MAAC All-Academic Team on top of being named the MAAC Defensive Player of the Year for 2020-21.

While she excelled on the court, the team needed to work hard to avoid the risk posed by COVID-19. Ironically, it brought the team even closer together.

To help prevent unnecessary exposure to those who tested positive for COVID-19, the team lived together on the York Hill campus. Caverly and Morris became neighbors as well as teammates.

“We only lived two doors down from each other,” Caverly said. “She was always in my room and I was always in hers … We all lived on York so we were right by each other. We spent almost 24/7 together.”

With an entire team just a hall away, the team’s close bond showed itself on the court. The team’s chemistry last year helped lead Quinnipiac to a 13-8 season and the second-best conference record in the MAAC (11-5).

“There needs to be that camaraderie off the court,” Fabbri said. “That leads to incredible bonds on the court when it matters most. Those winner-take-all moments, where it’s make-or-break time … it’s in those moments where I care because we’re together more than the other team.”

The year marked an adjustment for Morris as she came into her own both as a player and a leader.

“Last year was a breakout year for (Morris), and she hasn’t looked back,” Fabbri said. “She has those expectations for herself and is doing what she needs to do … She knows what her role is for this team and with that everybody else will follow.”

Morris’ style is to lead by example. Her initiative shows a growth in confidence she lacked in years prior.

“I don’t wait for someone to go (in drills),” Morris said. “I’m one of the first couple of people to always get on the floor and start the drill rather than watch it because I know what I need to do.”

Fabbri mentioned that Morris’ willingness to lead by example is vital for the team. It continues the legacy of the program that has been built over the years.

“Leadership comes in multiple forms, and she really allows her actions to speak volumes, which I think is the best way to lead,” Fabbri said.

Looking back to 2019, Morris sees the change she has made as a person and player.

“I definitely feel more confident,” Morris said. “I know all of our offense and our defense so my confidence has really grown since my freshman year.”

However, one thing hasn’t changed — her drive. Caverly said that Morris’ tenacity has been consistent from the very beginning.

“She’s just a very relentless player, and I think that she’s been that way since freshman year, probably before college, because I don’t think she’s changed,” Caverly said. “She’s always going to give 100%.”