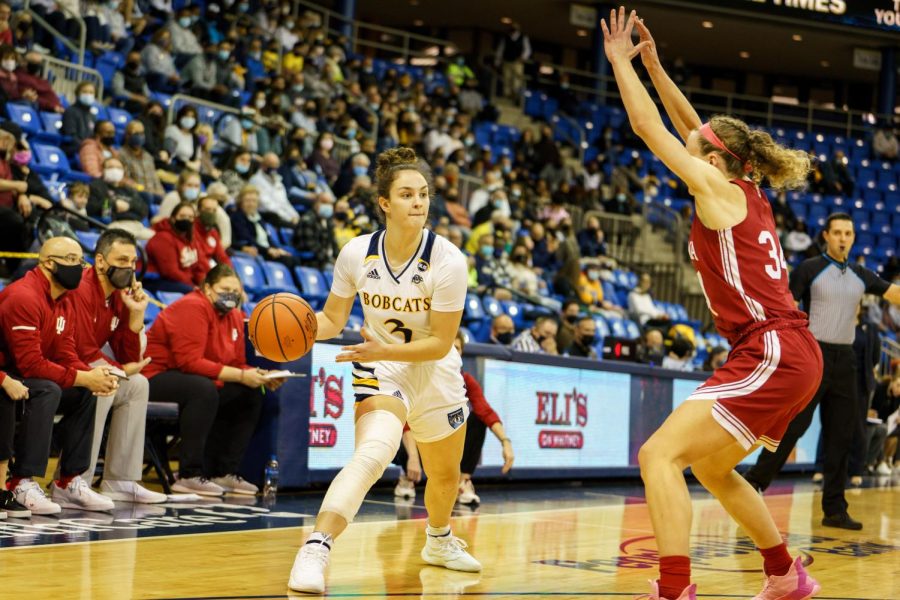 The Quinnipiac women's basketball team improved to 11-5 against Yale in the history of the teams' matchups.

Coming off a record-setting 113-64 win against Hartford, the Quinnipiac Bobcats passed a tougher test as they defeated in-state rival Yale 61-59.

With the win, Quinnipiac now improves to a 11-5 head-to-head record over Yale all time.

“I thought it was an interesting game from the first quarter compared to the fourth … Yale is a terrific club and extremely well coached, we knew that coming into the game,” Quinnipiac head coach Tricia Fabbri said.

Bonner found herself demonstrating where that trust comes from as she converted five of her seven shots from the field and forced four defensive stops with one block and three steals late in the game to hold off an impressive Yale offense highlighted by sophomore guard Klara Astrom who had 19 points.

When asked about what allowed the Bobcats to produce so well, Haywood and Bonner appreciated the confidence given to them by the coaching staff.

“Coach just really trusts us … she says how talented we are, like ‘I recruited you for a reason,’ Bonner said. “So no matter what it is, she trusts us.”

Mackenzie DeWees led the Bobcats in rebounds with eight, five of them coming offensively, as she played a major role in fending off the Bulldogs.

“Mack is just a workhorse,” Haywood said. “And we know that she is one of the most grittiest person on our team, and she’s gonna get it done no matter what. So we always know we can count on Mack to either get a stop or get a bucket.”

DeWees recorded seven points on the night for Quinnipiac as well as four steals, an aspect of the game she really enjoys as she is tied fifth in the nation with four steals per game.

“I love stealing the ball, I just love it … making the offensive player feel like a fool … I take pride in that in guarding the best player on the court as a guard,” DeWees said. “I think that steals and defense really leads into offense and that’s where a lot of our flow comes from.”

DeWees talked about how the team was able to rally back in the end.

“As a leader, being able to calm your teammates down and say ‘it’s OK’ because often teams will get riled up and start pointing fingers, and we didn’t really get in that mode at all,” DeWees said when asked about what helped turn the game back in their favor. ”We settled down and recouped … (the) defense literally held us in that game.”

Fabbri discussed how the team handled the rough stretch and rebound.

“It was quick, I thought we were getting really good shots, but we weren’t coming away with boards.” Fabbri said “ It was really quick and sneaky because I liked us and our flow … We just called a timeout and regrouped, settled, and then two minutes later we were able to exchange and either tie it or get the lead back.”

The Bobcats look to get back to work and keep their momentum going as they take on the Northeastern Huskies at the People’s United Center next Tuesday, Dec. 7, at 6 p.m.