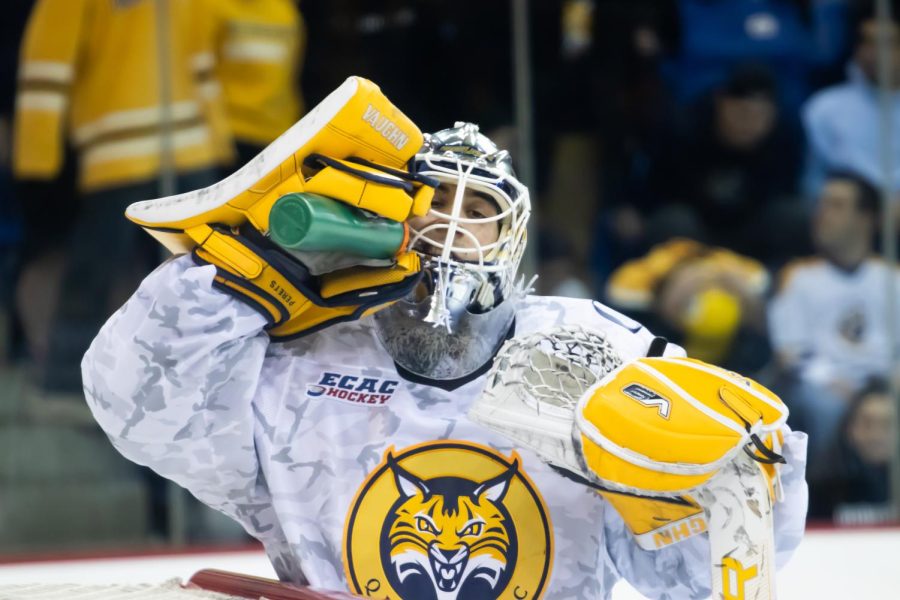 Freshman goaltender Yaniv Perets has a 1.06 goals-against average, which is on pace to set a NCAA record (1.19).

For the first time since the preseason following Quinnipiac’s Frozen Four run in 2016, the men’s ice hockey team received first-place votes in the USCHO poll along with the No. 3 rank.

Granted, it only lasted a week due to Quinnipiac’s inactivity in games during Thanksgiving break and thus were dropped to No. 4. Nonetheless, the Bobcats still received six first-place votes in back-to-back weeks.

In 14 games this season, Quinnipiac holds the best goals against per game in the country, limiting opponents to just 1.36 goals against.

This can partially be attributed to freshman goaltender Yaniv Perets’ outstanding performance. Through his first nine starts, Perets owns a league-leading 1.06 goals-against average and a .939 save percentage, which ranks sixth in the country. He’s also tied for third in the nation in shutouts with four. Not only that, but Perets ranks first in all three categories among freshman goaltenders.

Quinnipiac’s defense deserves the rest of the credit for its strong start to the season. Only two times this season have the Bobcats surrendered more than two goals in a game, one of which was the only loss on Quinnipiac’s record in which it fell to North Dakota 3-1. The other time, Quinnipiac defeated Arizona State 5-3.

How have the Bobcats been able to shut down scoring so far? It’s simple. They prevent opposing teams from shooting the puck.

This Bobcats’ defensive core is arguably the best in the country. It’s well rounded, with each player buying into head coach Rand Pecknold’s system. It’s noticeable how much better this defense is compared to last year. Just looking at shots against last year, Quinnipiac allowed 26.1 shots against per game. The most significant difference in defensive play is there are very few second-chance opportunities.

Quinnipiac does an excellent job at preventing shots from occurring in high-danger zones, such as the high-slot or around the goal crease. Additionally, the defense clears screens and ties up forwards around the net exceptionally well, giving Perets more time to react to second-chance shots or freeze the puck.

The Bobcats’ ability to block shots continues to be a critical aspect of their game. At five-on-five or on the penalty kill, it does not change how this team approaches its defensive strategy.

Speaking of the penalty kill, Quinnipiac currently holds the sixth-best penalty kill in the nation, only conceding 12 goals on 107 opportunities for an 89.7%.

As impressive as the defense has been, there’s one aspect to Quinnipiac’s game that has been and could continue to prevent this team from potentially being the best in the country. The power play, which was once a strength for Quinnipiac, is now a weakness.

Currently, the Bobcats sit among the lowest in the power-play rankings, No. 48 in the country to be exact, with a 13.3% conversion rate on the man advantage. They have been a little bit better as of late, scoring three goals on 14 opportunities over the last four games.

Most of the teams around Quinnipiac’s national rank in the standings such as Minnesota State, Michigan, St. Cloud, North Dakota, and Western Michigan all convert well more than 20% of its chances placing all five within the top-15 in the country.

If the Bobcats can maintain consistent power-play execution on top of their already outstanding defense, it’s only a matter of time before the USCHO slots Quinnipiac atop the national poll.