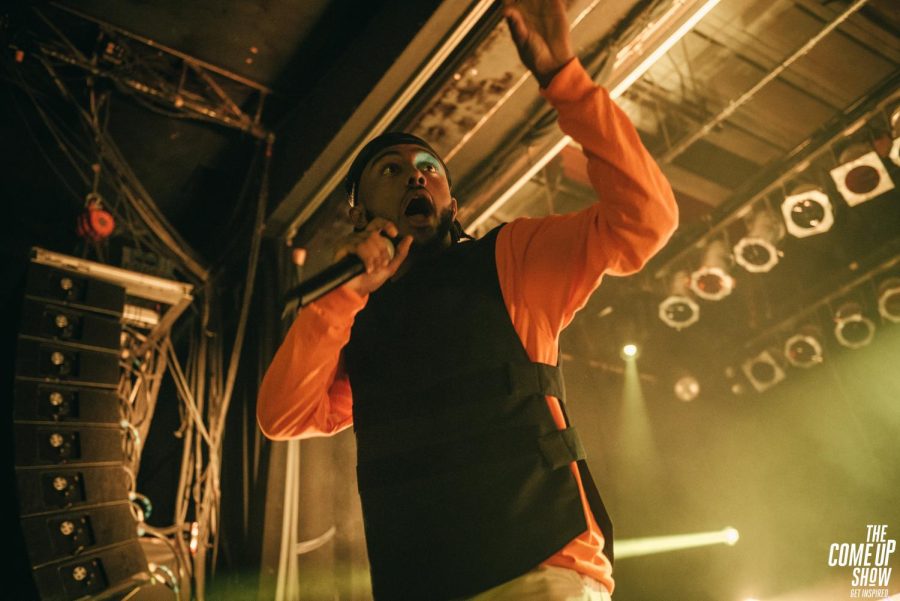 Aminé's new project is an experiment in hyperpop that fans can look forward to. Photo by The Come Up Show via Flickr

One of rap’s most underrated artists added another great project to an already impressive discography.

Aminé is best known for his hit song “Caroline” from his first studio album “Good For You,” which achieved mainstream success and put him on the map. Aminé was named to the 2017 XXL freshman class alongside rappers such as A Boogie Wit da Hoodie and Playboi Carti with many fans of the music industry waiting for him to reach his full potential. “TWOPOINTFIVE” gives fans an idea of what direction Aminé is going in.

Aminé explained in a press release that the “POINTFIVE” mixtapes serve as breaks between studio albums. He released “ONEPOINTFIVE” in 2018 between his studio albums “Good For You” and “Limbo.”

“TWOPOINTFIVE” is Aminé’s most creative and experimental project yet. The extremely fast beats along with catchy lyrics throughout the project made it easy to find myself dancing to. Songs like “Colors” and “Charmander” are very upbeat while featuring pitched vocals from Aminé along with a collection of effects throughout the track that make them stand out.

Aminé flashes his creativity in the song “Mad Funny Freestyle.” He has a reputation for being a comedic rapper, and that is evident throughout this track. The song features some of my favorite lines throughout the project such as, “Crawlin’ on the floor, she a Navy SEAL” and “I’m the African Darth Vader, baby, I’m your father.” The song is genuinely hilarious and definitely serves as a bright spot on this project for me.

“OKWME” is a two-minute track with a lo-fi beat and uniquely pitched vocals. The song is extremely catchy, but after a few listens it can get too repetitive, as can the entire project as a whole.

The cover art, the official “Charmander” music video and many of the lyrics throughout the project show a cultural influence of drugs. Especially in the song itself where Aminé says, “I’m off a shroom, I’m off a bean, I’m off a whole lotta shit.”

It’s clear that Aminé is just having a good time and having fun, which does make for some unique and bouncy music. However, Aminé never switches it up on this project, and the repetitiveness becomes noticeable after a few listens.

I believe Aminé’s main purpose of this mixtape is to experiment with the hyperpop sound, specifically the glitchy vocals and synths. The genre of this project feels like a mix between hyperpop and traditional rap that we’re used to from Aminé. This is a cool change of pace from Aminé, and hopefully he comes back to the hyperpop sound for later albums.

Aminé also seems to be taking some influence from U.K. rap throughout this project. U.K. rap has become more popular in the U.S. in recent years with its upbeat drum patterns and hi-hats. I definitely think it influenced much of the production in this mixtape, especially on the penultimate track, “Sh!t2Luz.”

The mixtape has 12 songs for a length of a little over 25 minutes. Every song on this project is below the three-minute mark, and some do not even reach a full two minutes. It’s not typically what I prefer in music projects, but it works in “TWOPOINTFIVE.” Each song delivers its own vibe that stays for just long enough without dragging on too much.

Overall, “TWOPOINTFIVE” gives Aminé fans an exciting look into the future as he continues to find his sound. A complete Aminé hyperpop rap album would be very fun and creative and could be in the rapper’s future plans as “TWOPOINTFIVE” continues to get the amount of love it has received so far, especially on social media. The vibes delivered on this mixtape

are immaculate, and I’m confident you can’t be in a bad mood while listening to it. The project deserves its praise for being fun and experimental, and I hope to hear similar sounds in future Aminé projects.
3.5/5 Stars