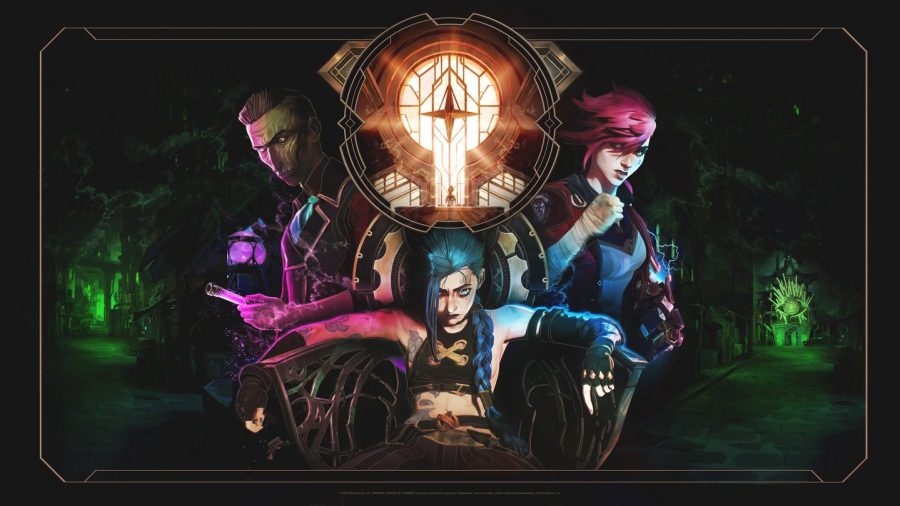 Despite the COVID-19 pandemic hurting businesses all over the world, the past two years have been a time to remember for Riot Games, developer of one of the most popular video games in the world, League of Legends.

With record-breaking esports viewership and several new games being released and announced, Riot has broken the glass ceiling of what a gaming company can do. But on Nov. 20, the company finished its boldest project yet — “Arcane,” an animated action-adventure show currently streaming on Netflix.

While League has over 150 playable characters, “Arcane” mainly focuses on two, Vi and Jinx. They are sisters growing up in the crime-ridden city of Zaun, which is in the middle of a political — and technological — revolution.

After one fateful day, the two go their separate ways, with Vi getting imprisoned and Jinx taken under the wing of the city’s crime lord, Silco. While Vi tries to save her sister from falling down a dark path, we follow two scientists on the brink of a breakthrough in technology and magic. When these two worlds collide, the relation between Zaun and its rich rulers in the city of Piltover will forever change.

As a League fan, I came into this show with prior knowledge of the world, characters, references and stories that “Arcane” would explore. However, this is a stellar show even for those who have never heard about the game, and one of the reasons why is because of its phenomenal world building.

The show sets the stage of the conflict between the rich upper-city of Piltover and the poor under-city of Zaun through gorgeous visual storytelling. The stark differences in design, color scheme and animation style between the two not only creates a great contrast between these warring cities, but it also serves as great eye candy that I couldn’t keep my eyes off of.

The neon-dystopian aesthetic of Zaun makes the green toxic waste pop out, and the superhuman drugs used throughout the show are beautifully hand-animated. Piltover, by contrast, is a big steam-punk city that incorporates advanced, futuristic technology with a very high-class, rich aesthetic found in the gold outlines of every building and piece of clothing.

In fact, I think you could watch this show with no sound and still understand what is happening. That’s not an indictment on the voice actors or writing — which are both excellent — it’s a testament to how the animation style and character models provide so much context and raw emotion to a scene.

But some people still have a negative bias toward animated shows, claiming that they are meant for kids and aren’t as “real” as a live-action show. “Arcane” blows that notion out of the water.

The show blends 3D and 2D animation perfectly, and every frame brings action and emotions to life that could never be as well-executed if confined to the limitations of the real world.

“Arcane” needed to be animated, and it used the medium to its fullest extent. Every character’s face is filled with emotion, and every fight scene is packed with flashy visuals that got me more invested into what is happening than any “realistic” live-action show could ever.

Contrasting that with the failure of the “Cowboy Bebop” remake in trying to recapture the essence of the original anime, it’s clear that sometimes animation is the only way to bring to life the various visuals and emotions a show has.

I’m talking so much about the animation because I’m afraid to spoil any of the amazing story elements to you. From the first few episodes, all of my expectations flipped on their heads, and I was on the edge of my seat for every single second. I think showing the cards that this show has behind its sleeve would ruin that.

While this show is a prequel to the characters that I already know about, I was stuck to my screen, astutely watching every scene as if I had no idea the inevitability of some plot points. Now that a second season is already confirmed, I’m eagerly counting down the days till I get to experience the rest of the story.

I could gush for ages about the work that the writers or Fortiche, the animation studio behind “Arcane,” have done, but it’s important to take a critical look at Riot as a company when deciding to watch this show. While Riot has created many great video games, stories and worlds for fans to fall in love with, that comes with the company’s very dark history.

Accusations of sexual harassment have been levied against many high-ranking executives, such as CEO Scott Gelb, and Riot has done little to nothing against these people who still work at the company, despite its supposed zero-tolerance policy.

Several former Riot employees have said the company has a “bro culture” which directly discriminates and silences female voices, as evidenced in a 2018 story by Kotaku.

While I have made the conscious decision to watch this show with this in mind, I understand many might not feel the same. I wholeheartedly recommend this show to anyone who is interested, as it’s one of the best shows to watch on Netflix right now. However, it’s important to think deeply about the media you consume.

I give the show an unequivocal 5/5. This is a must-watch if you have a Netflix subscription.