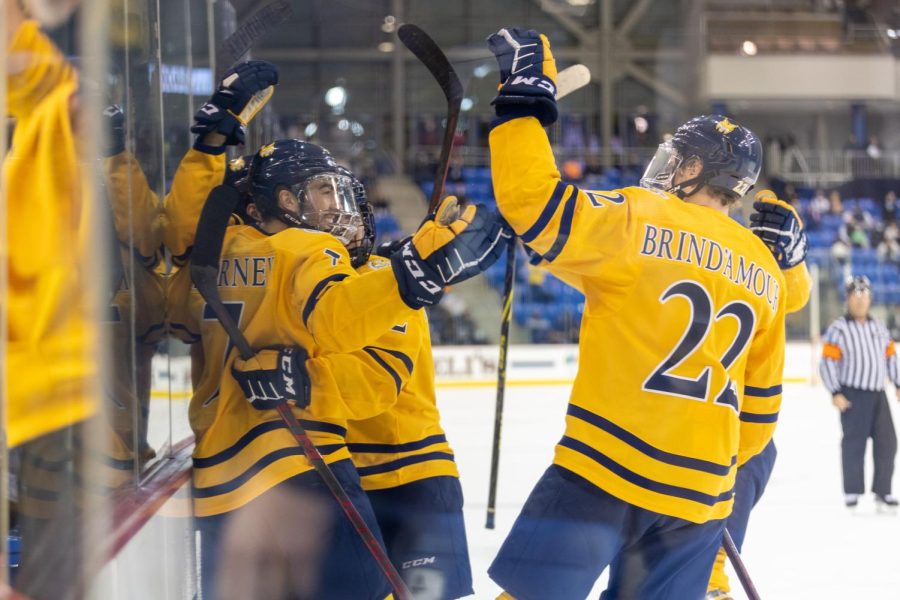 No. 5 Quinnipiac overcame a slow start to defeat the Clarkson Golden Knights in shootouts on Friday.

After starting the season off slow on the man-advantage (3-for-38 in their first nine games), the Bobcats have picked up their scoring on the up-a-skater over their last three contests, going 4-for-15 in that span. But it was the red-hot power play of the Golden Knights that would be the difference maker early in this one.

Up a man just five minutes into the game following an interference penalty to Quinnipiac, graduate student winger Jack Jacome laid a low shot on net from the right dot. His rebound was cleaned up by sophomore winger Alex Campbell to give Clarkson the advantage.

It seemed as if the Bobcats had gone into a Thanksgiving slumber early throughout the first half of this game. Their neutral zone passing and puck protection at the blue line left a lot to be desired and the overall effort just didn’t seem to be there, as Pecknold touched on postgame.

“I thought we were gliding too much and didn’t have a lot of energy early on,” Pecknold said. “Whether it’s north or south or east or west we’ve got to be moving our feet.”

Not lacking energy was the arena sound system, as the end-of-period buzzer malfunctioned and went off in the middle of play, delaying the game for over six minutes as officials attempted to fix it.

Out of that break in the action, Quinnipiac did little to rectify their play heading into the first intermission. The Bobcats recorded four shots in the final 11 minutes of the first period, but still finished the frame with a season low of five as the two teams combined to only put 11 pucks on net through one.

Less than two minutes into the second, Clarkson doubled down. Junior centerman Mathieu Gosselin laid a chip pass on the stick of sophomore defenseman Jordan Power, who walked the line and snuck one by Perets for his third of the season.
Finally, showing some life, the Bobcats rallied after falling behind by two. Graduate student defenseman Griffin Mendel swung up to the right point as the puck was worked across the zone onto his tape. He collected the puck and fired a shot bar-down over the left shoulder of Golden Knights sophomore goaltender Ethan Haider.

“I just got it on the flank and turned and shot it and made good screens on the net,” Mendel said. “The goalie didn’t really see it so it just went straight in.”

The goal was Mendel’s first in a Bobcat uniform after spending the past four seasons at the University of Denver, where he racked up five goals and 20 points in 134 games.

Quinnipiac dominated play for several minutes after Mendel’s goal, but a penalty call on senior defenseman Zach Metsa put Clarkson back in the driver’s seat. The Golden Knights put several shots on during nearly a minute of delayed penalty time, but posed an even greater threat after the penalty was called. Multiple high quality chances, including a point-blank shot from graduate student winger Luke Santerno on the goal mouth, were all stuffed by Perets.

With six minutes to play in the second period and his team looking tired, Pecknold called a timeout to let the Bobcats reset.

“I just thought a couple kids were really exhausted,” Pecknold said. “I didn’t want to give up another goal on that.”

With fresh legs, sophomore winger Ty Smilanic picked off a pass at the offensive blue line and walked in undefended for a shot on Haider that just caught the left shoulder of the Minnesota native.

Haider, a fifth-round pick in the 2019 NHL Draft by the Nashville Predators, stopped 18 of 20 shots on the night.

Not to be outdone, on the other end, Perets capped off the second period with an incredible series of saves on a flurry of shots from the first line of the Golden Knights as the buzzer sounded. He too allowed two goals on the evening, but still sits at first and 11th in the nation in goals against average and save percentage, respectively.

The opening minutes of the third period saw a lot of puck movement north-south, but not a lot of chances put on net, as broken up passes and deflected shots saw seven minutes of game action go by with only one shot on net for either side.

Finally, with a little over 12 minutes to play in regulation, redshirt junior Guus Van Nes collected the puck from behind the net, circled to the front and put a backhand shot by Haider to break the scoring deadlock and even the game at two.

“It feels really good,” Van Ness said. “Relieved to get the first one off my back and it’s good to get it at the time where it came at.”

That goal would be the end of the action during the first 60 as, despite a power play opportunity for the Bobcats, neither side generated any high quality scoring chances in the latter half of the period.

Quinnipiac controlled play for the first minute and a half of the three-on-three overtime period, which culminated in a shot from Bongiovanni that was eaten up by the Clarkson goaltender.

The Golden Knights then went on the offensive for themselves, but had nothing to show for it as the puck fell once again in the hands of the Bobcats with 15 seconds left on the clock and one last chance to ice the game.

Van Ness crossed the blue line with the puck and fed Metsa at the top of the zone, but Metsa turned the puck over on the point for the third time on the night, and nearly caused disaster in what had looked to be at least a surefire tie. Campbell waltzed down the ice on a breakaway, but Perets was more than up to the challenge and stopped the forehand-backhand attempt to send the game to a shootout.

The former Penticton Vee stood strong in the shootout as well, stopping all three shots he faced, which allowed Bongiovanni to seal the game with a little five-hole magic of his own.

“Yanni was great in the shootout and made that save in overtime on the breakaway too, so he really stopped four breakaways in a row,” Pecknold said.

With the new NCAA rules implemented for the 2020-21 season, a shootout can be used in conference or tournament play for advancement purposes. So for Quinnipiac’s official national record, which is used to calculate the PairWise rankings, the game stands as a tie. However, in ECAC conference standings, the Bobcats earned an extra point for the victory.

Quinnipiac continues its homestand on Saturday against St. Lawrence, who is 3-3-4 on the season after a comeback win over Princeton Friday night.