The founder of the Quinnipiac Indigenous Student Union leaves her legacy 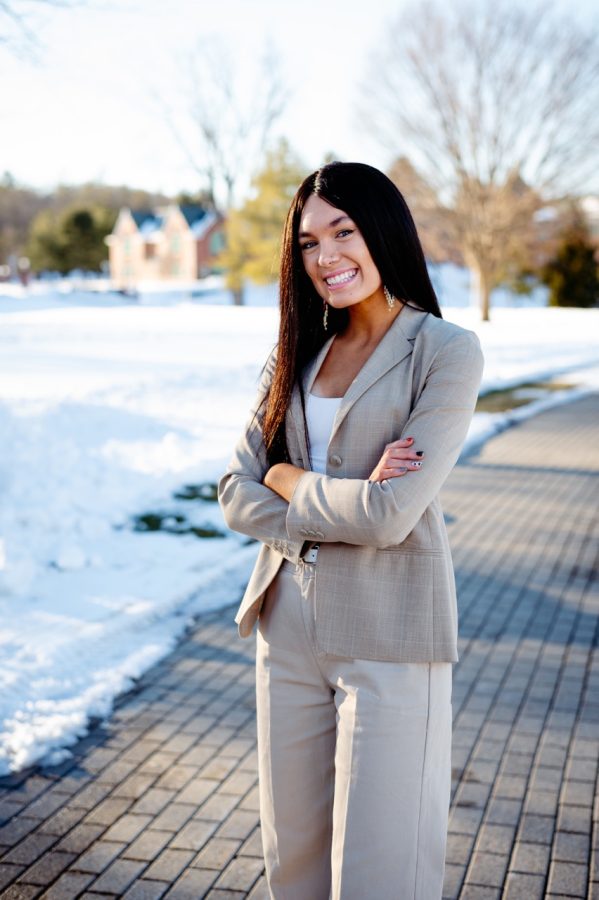 Kiara Tantaquidgeon signs off as president of Indigenous Student Union. Photo contributed by

It’s a great idea on the surface, but when you dig deeper, it is obvious that the university lacks diversity, with 21% of the class of 2024 identifying as underrepresented minorities.

For students like Kiara Tantaquidgeon, a senior health science studies major, “inclusive excellence” is all too often an empty promise.

Tantaquidgeon “couldn’t believe” that a program didn’t exist for indigenous students when she came to Quinnipiac.

Coming from an Indigenous background as a member of the Mohegan Tribe, the last thing Tantaquidgeon wanted to do was attend a university without a space for Indigenous students.

However, unforeseen family issues led Tantaquidgeon to stay close to home for college and attend Quinnipiac. Though the university shares a name with the Quinnipiac Tribe of southern Connecticut, there was little visible Indigenous representation on campus.

Tantaquidgeon, who had grown up learning about the Quinnipiac people, said this disappointed her during her first year.

“I kind of just went under the radar and tried to get through the year because I had it all set up to transfer,” Tantaquidgeon said.

Cornell University almost became Tantaquidgeon’s home away from home after her first year at Quinnipiac, thanks to the numerous student organizations for Indigenous students.

That all changed when she got some life-changing advice from her academic advisor, who asked her, “would you rather be a small fish in a big pond, or a big fish in a small pond?”

“I thought about that and then decided to stay,” Tantaquidgeon said. “But under the condition that I was going to do work, relating to … having an Indigenous community on campus.”

As a sophomore, Tantaquidgeon gave a speech at her first teach-in about being an Indigenous student in a primarily white institution, and she did not stop there.

So, she made her own space.

The Indigenous Student Union, which Tantaquidgeon lovingly refers to as her “baby,” has existed as an informal group since fall 2019, but the university only officially chartered it in fall 2021.

Tantaquidgeon, who has been the organization’s president since its conception, worked tirelessly for this recognition, drafting constitution after constitution over a six-month period and devoting countless hours to securing university approval.

Prior to being an organization recognized by the university, ISU relied on funding from the Multicultural Student Leadership Council in the interim, which meant it couldn’t have events that required substantial funding, such as holding giveaways and hosting speakers, that can attract new members.

“It was really hard on me both mentally and academically. I got a 2.8 GPA is where I started. And that is not like me,” Tantaquidgeon said. “A lot of times where I was like, I don’t want to do this anymore. This isn’t worth it.”

But with a university-recognized organization under her belt, Tantaquidgeon said she’s changed her perspective.

“(ISU) has grown into something that I never imagined it being,” Tantaquidgeon said. “It’s so much bigger than I ever thought it was going to be and so much more well-known and recognized and appreciated in the Quinnipiac community than I could even have hoped for.”

Tantaquidgeon said the best part about being chartered is the validation of all the group’s hard work.

“Now that we have this title, we can actually be a group of people who can call Quinnipiac home, and also find home within our own Indigenous community,” Tantaquidgeon said.

For the founder of ISU, it has been a long journey, culminating in where she is today: on the cusp of graduation in December with a strong group of advocates behind her to follow in her footsteps.

These students, who will inherit Tantaquidgeon’s project, said goodbye to her Wednesday, Nov. 10, during her Farewell to ISU event.

“The legacy Kiara is leaving behind is a big one,” David Rosenbaum, a sophomore history major and the secretary of the organization, said. “However, I can say with confidence that it’s one we are prepared and ready to follow.”

Rosenbaum compared Tantaquidgeon to a “founding father,” saying that it will be difficult to live up to her influence.

“We (the ISU e-board) have to remember that we are all different people who bring different things to this beautiful and diverse organization,” Rosenbaum said.

When it comes to the future, Tantaquidgeon shared her hopes for the organization— an ISU that is even more involved in the university and the community as a whole.

The ISU began forming alliances across the state, working closely with the Native American and Indigenous Students Association at the University of Connecticut.

Tantaquidgeon said that she hopes the organization draws on larger Indigenous student groups at other universities, such as Cornell and Yale University, and creates a space for Indigenous students. The group also hopes to advocate for the addition of an Indigenous studies minor to Quinnipiac and change the fictitious and culturally-appropriative “Legend of the Bobcat.”

“I hope that more native students will feel comfortable coming here, but I think even the small group of people that we have now are going to be capable of really helping push forward this big change that needs to happen,” Tantaquidgeon said.