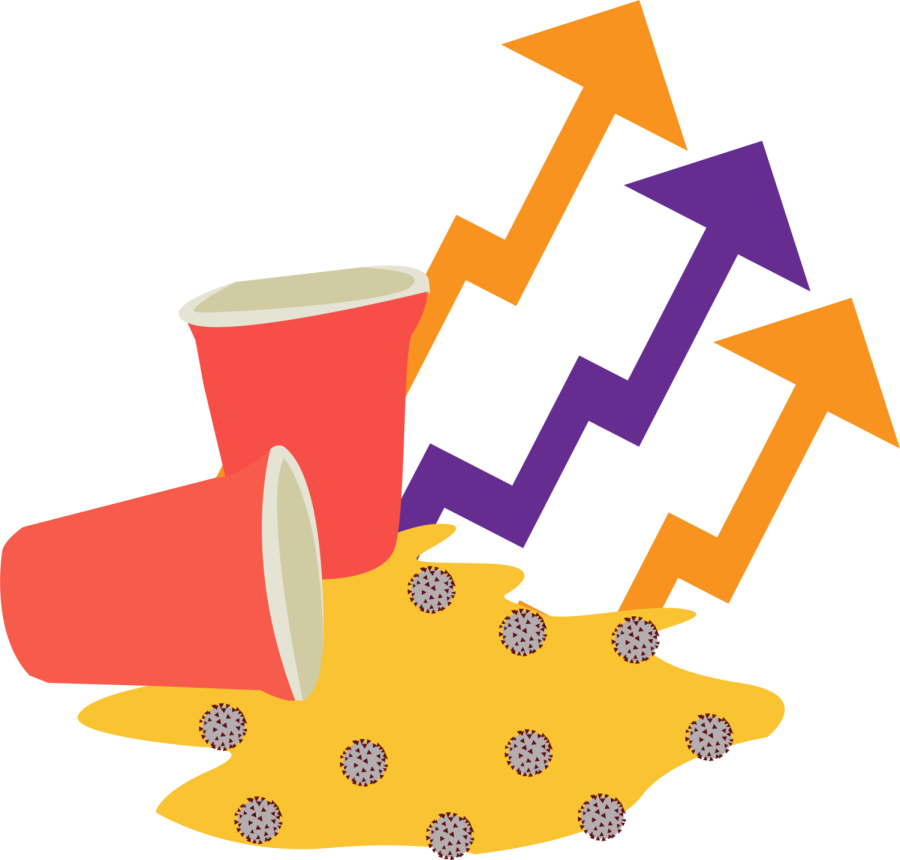 Following Halloween and Bobcat Weekend, Quinnipiac University identified 30 new COVID-19 cases in a span of seven days, the largest increase of the semester. Community members say the spike is concerning, especially as the end of the semester nears.

Unvaccinated students are the only students required to undergo weekly testing. Senior Medical Adviser Dr. David Hill said there are around 350 to 400 unvaccinated students who engage in these tests, but that throughout the semester, there have only been a few positive cases identified within this cohort.

Ahead of Halloween weekend, the university urged students, via email, to follow safety protocols, as the holiday sparked a rise in infections last year and led to a campus-wide quarantine.

Hill said it is likely last week’s rise in cases are a direct result of Halloween celebrations.

“It just seems likely, when you’re going along and you’re having two or three or four cases a week everything seems to be going well, and then we know that this is a big party weekend … it just seems to make sense, because nothing else has changed in our community,” Hill said.

“It was the same as when we got sent home last year after Halloween, so I wasn’t expecting anything different,” Defelice said.

“I knew (a rise in cases) was gonna happen again,” Defelice said. “And New Haven was so crowded anyway, there was no point in going out (because) I expected the cases.”

“When you go to the clubs, no one’s wearing a mask, so I figured that was what (the rise in cases is) from,” Costello said. “It’s not necessarily the university’s fault for that at least.”

Toad’s Place, a popular New Haven club patronized by Quinnipiac students, was one local establishment impacted by Halloween weekend. Police shut it down during a Halloween-themed party Oct. 27, after a barricade containing the line of people waiting to enter collapsed, as reported by Yale Daily News. A club employee told Yale Daily News he estimated more than 2,000 people were on the premises at the time.

Despite students increasingly going off campus on the weekends, Costello said it is not something the university should be concerned with.

“I feel like students are going to do what they’re going to do, and the university should be focused on what happens here on campus,” Costello said.

Like Costello, first-year health sciences major Sophia Stamos said she has seen many people not masking, especially on campus.

“I think that students were kind of laying back with the rules (with) wearing masks and stuff,” Stamos said. “And I’ve seen even (in the Student Center) people not wearing their masks.”

Stamos said more should be done to ensure students are properly masking, especially in classes.

“People should say stuff about it, to tell people (to) put their masks on or put them above their nose,” Stamos said. ”Professors should do a better job of doing that or just students should know to wear a mask.”

Costello also said the rise in cases is concerning because of the potential impact on classes.

“It does worry me in the sense that I don’t want campus to close at all, especially right before finals or anything,” Costello said. “So I feel like the university should just be promoting students’ agency and being safe and taking part in safe behaviors rather than cracking down on every single policy ever. I think students are generally smart about it.”

Hill said the university will look to increase its messaging to students and continue enforcing safety protocols to keep positive case numbers low.

“COVID is still with us, and despite COVID being generally a mild illness in younger or vaccinated individuals it’s still not a reason to let down one’s guard,” Hill said. “That’s the message, not a punitive message, but just to really raise the awareness that we want to continue the life that we’ve enjoyed this fall and we want to continue it up to Christmas.”

With the upcoming Thanksgiving break, Hill also emphasized the need to practice safety protocols when students are home in order to remain healthy when returning on campus.

“My recommendation is that you practice over the Thanksgiving break the same kinds of preventive measures that we’re stressing, it’s that, particularly in high density social situations indoors that you wear masks,” Hill said.

First-year finance major Shawn D’Aversa said students having a week at home could be a positive thing for the rate of infections on campus.

“With break coming up, I feel like in some ways, that’s good, because it’ll reduce numbers on campus, but people can come back with the virus as well,” D’Aversa said.

To ensure a safe return to campus after Thanksgiving break, Hill said the university will hold its weekly testing for unvaccinated students on the Monday and Tuesday after Thanksgiving, as opposed to its normal Tuesday and Wednesday schedule.

Since vaccinated students are not required to be tested weekly this semester, Hill said there are two major ways the university identifies cases of COVID-19 in addition to the testing of unvaccinated students.

Despite a change in testing policies this semester, isolation protocols for those infected with COVID-19 remains similar to last semester. These individuals are required to isolate, but their vaccinated close contacts do not need to be quarantined. Hill said Quinnipiac officials also conduct contact tracing for infected students.

D’Aversa said that this spike ultimately comes down to individual student actions.

“People don’t always obey the rules, and people don’t always take the smartest course of action, but I feel like there’s a lot of responsibility on our students,” D’Aversa said. “And so far overall, despite it not being perfect, our students have done a good job, and they’ve kept numbers low. So I think it’s more from an individual responsibility standpoint than anything else.”