Villanova, Wall Street and culture: Why QU men’s basketball head coach Baker Dunleavy is entrusted with a team that needs to be ‘built back up’ 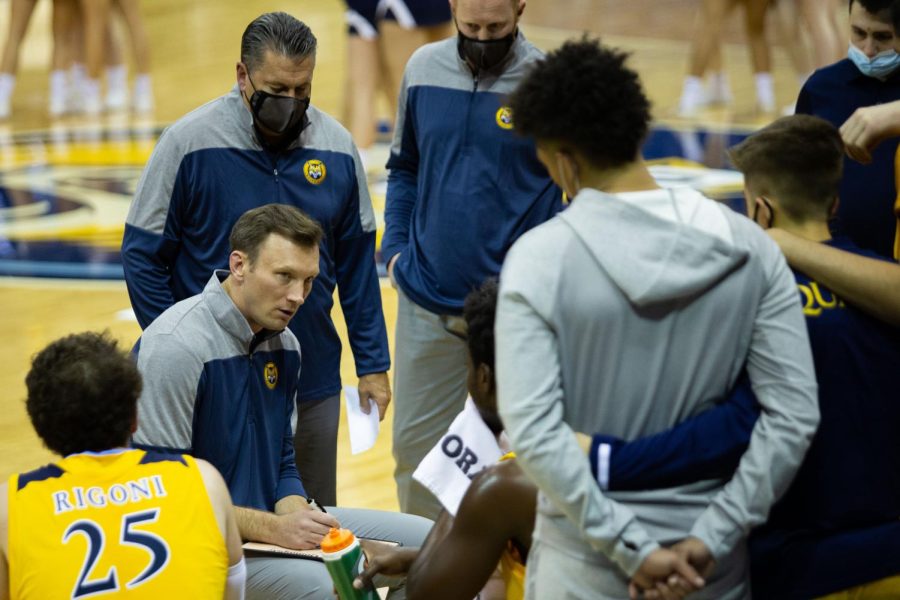 Quinnipiac men's basketball head coach Baker Dunleavy is beginning his fifth year at the helm of the Bobcats.

Winning sports programs do not appear out of thin air. They are developed behind closed doors and nurtured over time. The Quinnipiac men’s basketball team has aspirations of becoming a winning program, and head coach Baker Dunleavy is tasked with turning this hope into a reality.

Dunleavy played at Villanova from 2004-06 and started his head coaching career at Quinnipiac during the 2017-18 season after being on the coaching staff at his alma mater. Going into his fifth year as a Bobcat, he only has a single winning season, 16-15 in 2018-19. Last year during the pandemic-shortened season, the Bobcats finished 9-13 and lost in the first round of the MAAC tournament to eventual conference champion Iona.

Do you know who had an eerily similar first four seasons as a coach? Dunleavy’s former head coach and 2021 Basketball Hall of Fame inductee Jay Wright. The renowned coach was 50-63 through four years at Hofstra University.

“Number one, I don’t think either of us would be advertising that,” Dunleavy said, chuckling before responding. “I think Hofstra was, as well as Quinnipiac, both jobs that needed to be built back up and so that’s reflected in what happens the first few years. But we want to win every game and we’re not a program that’s proud of that, that winning percentage.”

The process of going from a developing team to a contending one is not quick nor easy for most coaches. Creating a winner takes talent, as well as — every coach’s favorite word — culture.

“If you give coaches a platform to talk about the word ‘culture,’ they could go on for hours,” Dunleavy said. “The biggest thing for us is when we talk about attitude, which is the main word we use in our program. It’s really about response. When things are going against us, we have the best response of anybody in our league and anybody we’ll play against.”

Graduate student forward Jacob Rigoni, the Bobcats’ leading scorer from last year with 11.8 points per game, started his career at Quinnipiac the same year Dunleavy began coaching. He’s been familiar with Dunleavy’s philosophy of staying even-keeled from day one.

“That’s the foundation of this program,” Rigoni said. “When plays don’t go our way, we come together and regroup and we make the next play, and we know that’s the most important one. So, I think he’s done a great job instilling that, and guys really bought into that idea.”

The culture Dunleavy is building with the Bobcats is one that he derived from his time with the Wildcats.

“For me, that is something that I learned from coach Wright as far as attitude, and all the things that go along with it,” Dunleavy said. “I was very careful when I came here to Quinnipiac, and our staff got started, not to just mimic but to do the things … that I believe in wholeheartedly and … our players at this level could execute.”

When Dunleavy was with Villanova, Wright named him director of basketball operations in 2010, promoted Dunleavy to assistant coach in 2012 and elevated him to associate head coach in 2013. He helped the Wildcats win a national championship in 2016, his final year as a coach in the program.

“He excelled at every role and was a guy that nobody was surprised that he transcended through the ranks as quickly as he did,” said George Halcovage, Villanova’s current associate head coach. “(He) embodied everything coach Wright would want someone to (do) in the roles he was given.”

Halcovage said Dunleavy’s strengths are his abilities to communicate and build relationships.

“One of the best basketball minds I’ve been around in terms of how he thought the game,” Halcovage said. “He also was really good at just communicating and making sure that players could understand his message in a way that got across very quickly … but it’s really about the relationships and being great with the players, and I think he was tremendous with that in his time (at Villanova).”

At Quinnipiac, Dunleavy has cultivated relationships with players, one being with sophomore wing Tymu Chenery. Last season, Dunleavy worked individually with Chenery on the mechanics of his jump shot, helping him gain confidence in it throughout the year. This kind of one-on-one work is not typical of head coaches, Chenery said.

Outside of shooting help, Chenery recalled the times when he had individual success last season and Dunleavy helped him keep his performances in perspective.

“(Coach said) ‘You haven’t done anything yet, you’re not where you want to be,’” Chenery said. “I feel like that stood out to me because you know a lot of people, a lot of coaches can just try to build your ego … but I think he did the exact opposite.”

Halcovage explained how Dunleavy also has “a great way of knowing the pulse of the room and being able to keep things light when he needs to.” One moment that exemplifies Dunleavy’s lightness happened last year during a team practice in a live drill.

“(He) drives right by (junior wing) Brendan (McGuire), fake pass to the corner and then lays it up,” said Tyrese Williams, a senior guard. “And I’m like, ‘Yo, wait hold on, that was kind of tight.’ It was just so hilarious just see the way he moved, the way he walked after the play. It was just like he had so much swag doing it. It was one of those moments, like he made something so serious look so hilarious.”

This moment doesn’t only live in the players’ memories. Video evidence exists.

“I think, actually, it was just thrown in the group chat, honestly, like two, three weeks ago,” Williams said. “We recently just bring it up because it’s just so funny.”

Having a balance of humor and gravitas is necessary at times to be an effective coach. Prior to entering the coaching ranks, he was a part of the no-nonsense corporate world, working at investment management company Merrill Lynch in New York City.

Dunleavy’s background in sales directly assisted him in his ability to recruit.

“He kept it straightforward, he’s very convincing,” sophomore guard Luis Kortright said about being recruited by Dunleavy. “He kept it ‘real-er’ than most of the coaches that I was talking to.”

The most important way Dunleavy’s time on Wall Street aided his coaching ability was through the adversity he faced.

“Number one, I was completely inexperienced, unqualified and green,” Dunleavy said. “So it really put me in a position to struggle, which is one of the best things that’s ever happened to me.”

The Bobcats have struggled to win more than they lose in three of the four years Dunleavy has coached the team. But there is a possibility that these struggles might be a thing of the past. Although the team was ranked No. 9 out of 11 MAAC teams in the MAAC Preseason Coaches’ Poll, the Bobcats have impressed so far.

In the season opener against No. 21 Maryland, the Bobcats only lost by 14 — covering the +22.5-point spread — and outscored the Terrapins 44-42 in the second half. In its next game, the Bobcats blew out Division III opponent Western New England by a Division I era program-record 51 points. Most recently, Quinnipiac defeated Holy Cross 76-68, having five players score in double figures.

While the start to Dunleavy’s fifth season has been strong, Quinnipiac is far from proving that it can seriously compete in the MAAC and declare the rebuild phase over.

In Wright’s fifth season, he led Hofstra to a 22-10 record. Then, in his next two seasons, Hofstra won consecutive conference championships before Wright left for Villanova.

Although it’s unreasonable to expect Dunleavy to have the same ascent as his former coach did in year five, his season is off to a good start. Will this be the year Dunleavy begins to live up to the “superstar” potential Wright saw in him? Regardless of what happens, Dunleavy will keep the same attitude.