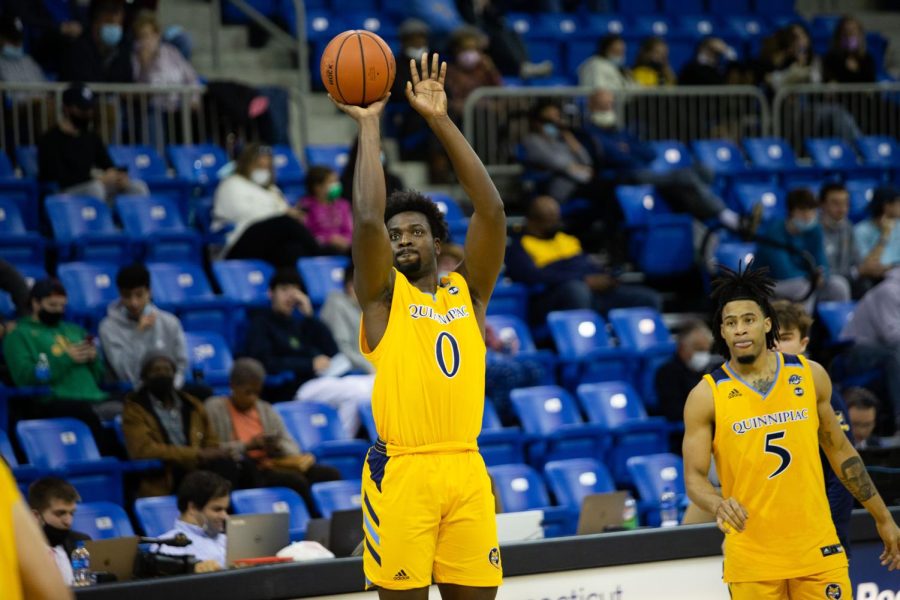 Graduate student forward Kevin Marfo had a double-double, his first standout performance since returning to the Bobcats.

Both teams came out hot on the offensive end, combining for 81 points in the first half, both teams shooting over 50%.

Sophomore guard Dezi Jones took over, leading the Bobcats with 11 points in the first half.

Holy Cross didn’t back down, the Crusaders took a 36-30 lead with five minutes to go in the first. Quinnipiac looked helpless after a deep 3 from freshman guard Kyrell Luc as the shot clock expired extended the Holy Cross lead to eight.

Sophomore guard Judson Martindale couldn’t miss in the first half for Holy Cross, scoring 11 points to go with one rebound and one assist. Holy Cross took a 43-38 lead into halftime.

“We kinda got punched in the mouth a little bit,” Sophomore forward Tymu Chenery said.

Quinnipiac flipped the script as soon as the second half started. A quick 8-2 run gave the Bobcats a 46-45 lead.

Quinnipiac held Holy Cross to just 12/33 from the field in the second half.

“I wish I could take credit for the defensive switch in the second half, but I think it was really just a mentality thing,” Bobcats head coach Baker Dunleavy said.

The Bobcats continued to pour on. Another 8-0 run over the course of four minutes gave them a 58-49 advantage with 10:16 remaining.

Despite two missed alley-oops from Tymu Chenery, Quinnipiac continued to use backcuts to get to the rim at will and set up open shots, “I’ll get those next time, those were my bad,” said Chenery.

The game went back and forth from there, with Quinnipiac leading 67-61 with just under four minutes to go. The Bobcats didn’t look back from there, closing out the game in the final minutes for a 76-68 victory.

The Bobcats will continue their non-conference schedule when they take on Central Connecticut State on Saturday at 1 p.m. at the People’s United Center.