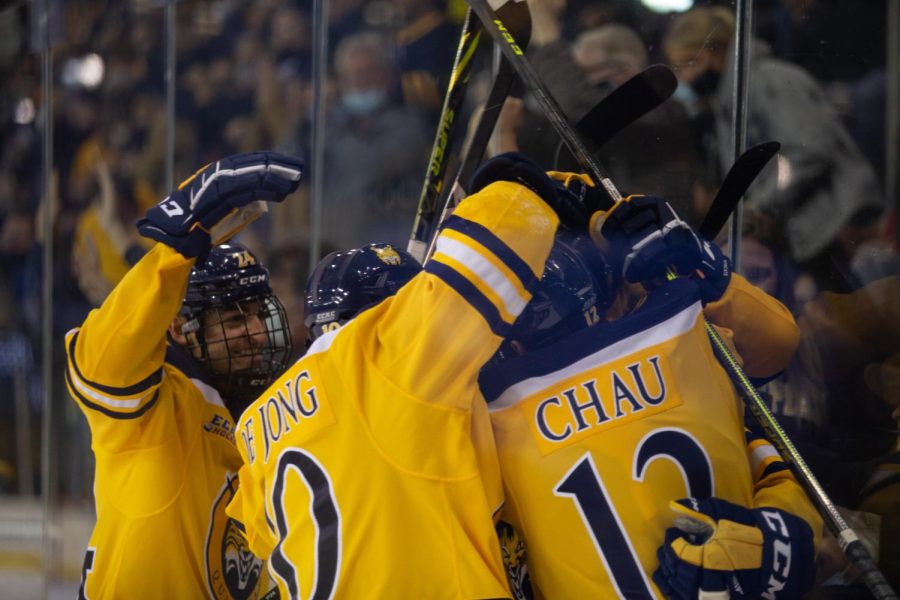 What a game it was for a sequel of the weekend series in Hamden Saturday night as the Quinnipiac men’s ice hockey team faced off against the Arizona State Sun Devils for the second time in as many days. The Bobcats came up victorious again, winning in convincing fashion 5-2.

Reigning ECAC Hockey Player of the Month, senior defender Zach Metsa, was noticeable as well. He racked up three more assists in this one, giving him 10 points in the last nine games.

For the Bobcat faithful in the stands, they could not have asked for more entertainment. There were goals, celebrations, fights and a boatload of drama. Quinnipiac head coach Rand Pecknold described his team’s performance as “big boy hockey.”

Chau, in particular, caught the eyes of many, including Pecknold.

“I’m just really impressed with him as a player and as a person,” Pecknold said. “He is a great leader in our room … really an A+ kid.”

The game was off to an unorthodox start at puck drop. Quinnipiac freshman forward Christophe Fillion and Arizona State graduate student forward Johnny Walker received two-minute penalties for protocol violations — a call foreign to many casual hockey fans. The two players refusing to leave the ice and allowing the Zamboni to resurface it was the suspected reason for their penalties. It is a known hockey ritual and superstition to be the last one off the ice.

The Sun Devils had the upper hand early in this contest. O’Reilly tipped one through the five-hole of Quinnipiac graduate student goalie Dylan St. Cyr six minutes into the game. Arizona State held onto that heading into the first intermission, controlling much of the play.

Just minutes into the second period, the powder keg finally exploded as the Bobcats scored three goals. After failing to capitalize on an abbreviated 5-on-3 power play, Quinnipiac rolled with its momentum and cashed in on the one-man advantage after Lombardi touched twine.

Then, the Bobcats roared again in the last two minutes of the second period, scoring twice within 1:14. First, it was Chau who scored without ever recording a shot. Chau broke into the Sun Devils’ zone, hit the corner of the goal post, and it deflected off an ASU defenseman.

“I thought I made a good shot. (I was) unlucky with the crossbar, super lucky to go off the (defenseman) coming in,” Chau said.

Following that, Burgart stripped a Sun Devil, forced a turnover on the backcheck, and scored on the breakaway, putting the crowd into a frenzy. By the end of the second period, the Bobcats had a healthy lead of 3-1.

ASU came into the third period hungry as it scored just 56 seconds in. However, Chau’s second goal of the game squashed its momentum. It was another power-play goal that made it 4-2.

The craziest part of the game came in the final stages. After a scrum in front of ASU’s net, fisticuffs ensued, and Bobcat senior forward TJ Friedmann and the Sun Devils’ freshman legacy Josh Doan received 10-minute game misconducts.

As if it could not get any worse for ASU, it pulled its goalie for the extra attacker only to let the puck into the empty net after a costly blunder. Chau completed his hat trick on a puck that rolled into the net.

WHAT A NIGHT. Graduate Oliver Chau records a hat trick on THIS #NotTop10 candidate: pic.twitter.com/GFpeVZTuft

In response to his bizarre goal, Chau said, “I have no words. I’m just grateful.”

A win of this magnitude is sure to keep the spirits in the locker room high.

“Winning is fun, so we’re trying to have as much fun as possible,” Lombardi said.

Coming off of two key victories, the Bobcats will have to dig even deeper within themselves as they have a challenging and familiar ECAC Hockey opponent approaching on Nov 19.

“We’ll take our sweep, move on and get ready for Clarkson,” Pecknold said.