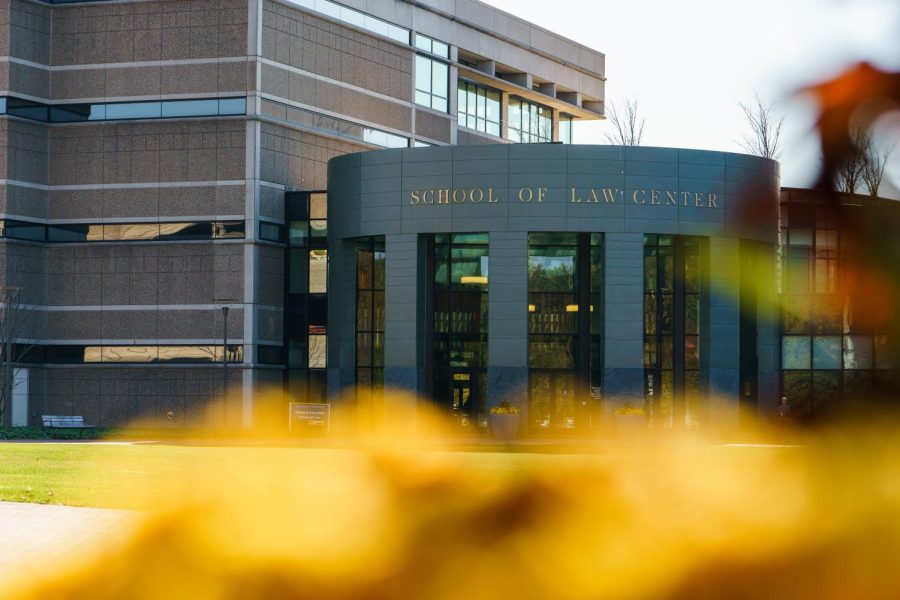 NLG co-President Abigail Mason, a third-year law student, said once she found out about the stickers, she immediately took action to get them removed.

“It’s like a very threatening message to have,” Mason said. “People are coming in for the day — so I went and I rallied a bunch of first-year law students, and we scraped them down.”

Before she took them down herself, she and fellow co-president Hope Estrella, a third-year law student, reported the stickers to Public Safety. They said the department already had notice of the incident and was investigating it, but had to wait for Facilities to remove the stickers.

However, once Mason and a group of six other students began removing the stickers, a facilities worker approached them and said the department was waiting on Public Safety to approve of the removal of the stickers.

“T​​here was like a little bit of a disconnect there,” Mason said. “Then they thanked us for taking (the stickers) down because they also appreciated it. They did not want them up.”

In response, Quinnipiac Vice President of Equity and Inclusion Don Sawyer sent an email titled “Bigotry has no place here,” and said the university stands against the message of the stickers.

“We are an institution committed to ensuring all groups feel supported to thrive and fully participate in our educational mission,” Sawyer wrote in the email.

He also wrote that the school was working with the police and Public Safety. The investigation is ongoing as of publication.

Sawyer included in the email that there has been similar stickering on other campuses. The same day the incident occurred at Quinnipiac, Patriot Front also placed stickers around West Virginia University, according to the Daily Athenaeum.

Patriot Front is a white nationalist hate group that was founded after the deadly riot, “Unite the Right,” which took place in Charlottesville, Virginia from Aug. 11-12, 2017, according to the Southern Poverty Law Center.

School of Law Dean Jennifer Brown followed up on this point Sawyer made in an email to law students. She added that the university was taking the incident “very seriously.”

“I also want to amplify Sawyer’s important message and assert that bigotry and racism have no place in our law school community,” Brown wrote in the email. “We stand in unity against the hateful rhetoric of White nationalism and affirm the dignity and worth of all our community members.”

Among the law school community, it has been discussed how if the person or people who put the stickers up are law students, it is especially problematic for their future careers as lawyers.

“I would have a problem with the Bar Committee letting somebody with that kind of belief be an attorney,” Mason said.

Mason said something she and other people pointed out was that the incident occurred less than 24 hours after their organization released a statement about diversity and inclusion at the law school.

“I thought the timing was suspicious in light of the diversity statement, even if the two may not be related,” said Nathan Honoré, a third-year law student.

As of publication, there are 110 signatures on the statement, including other law organizations such as the Black Law Students Association, Women’s Law Society and the Student Bar Association.

In the statement, the NLG condemned any expression of “racism, transphobia, xenophobia, antisemitism, homophobia, sexism, ableism and other forms of oppression.”

Sometimes students would say offensive things during class discussions, which was one of the things that sparked the idea for the statement, Mason said.

“Students kind of playing devil’s advocate in class and using that as an excuse to bring up offensive topics or using slurs and other offensive language in our law school without being held accountable,” Mason said.

The statement also included calls to action for the School of Law, which are requiring ongoing diversity training for students and faculty, encouraging all student organizations to host a diversity and inclusion event and increasing resources that address employment discrimination students may face.

Honoré said he supported the statement and that the university needs to improve its attitude toward oppressed groups.

“I think one way for the university to support marginalized communities is to be transparent, both about its struggles and its efforts to solve the problem,” Honoré said.

Estrella said she and the other members of the NLG started the organization in 2020 after George Floyd was murdered on May 25. She said the organization is more important now than ever since she feels civil rights movements have lost momentum recently.

“Sometimes there’s like these really great movements that keep going and there’s lots of inertia that keeps them moving and then sometimes they kind of fizzle out and die,” Estrella said. “I think the most important thing is just not to let it fizzle out and to continue to work on our advocacy.”