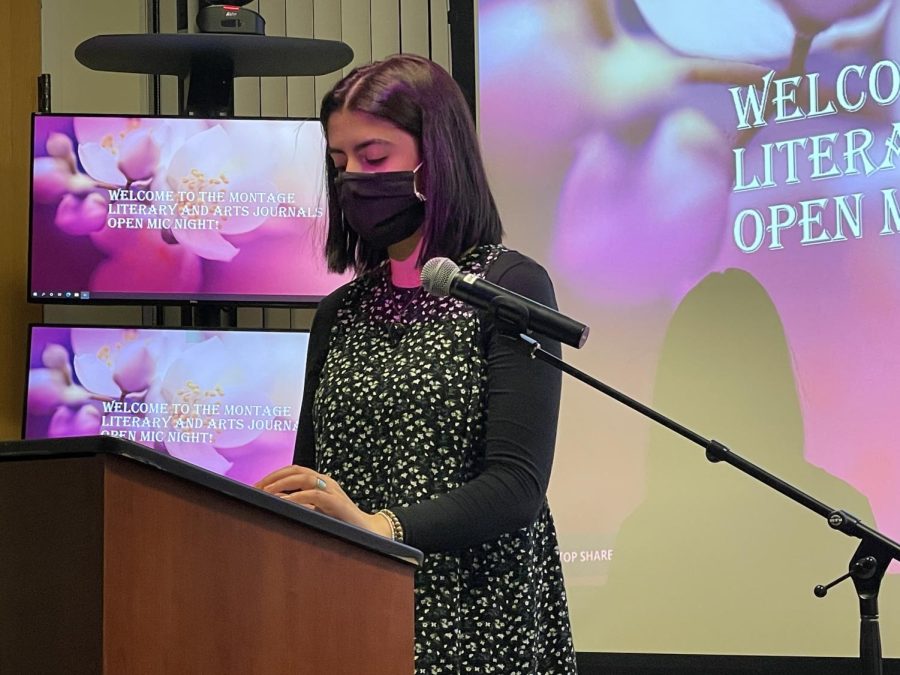 After spending over a year alone during the COVID-19 pandemic, Quinnipiac University students are eager to form bonds on campus.

The Montage Literary and Arts Journal held an Open Mic Night in the Carl Hansen Student Center Nov. 3, extending
a warm invitation to Quinnipiac’s creative community for a chance to socially and emotionally connect with its members.

Dim lights and a cherry blossom background set the scene for club members to share their artistic work ranging from original spoken-word poetry to musical covers in an intimate setting.

“Open mic nights really just give everybody an opportunity to share their voices,” said Tamara Anderson, editor-in-chief of Montage.

Isabella Torres, a first-year business major, simultaneously kicked off the night and made her Montage debut with a literacy narrative, an introspective piece describing her experiences as a writer. She quickly connected with the audience through her struggle with academic validation and classroom anxiety, a common experience for college students with 87% citing education as their main source of stress, according to The American Psychological Association.

Torres thanked Montage for the opportunity to use writing as a therapeutic tool to sift through her emotions.

“I’m realizing more and more about myself literally throughout the essay,” Torres said.

Torres wasn’t the only student to make a debut. First-year English major August Bishop’s first Montage performance included two heartbreaking poems about romantic relationships and their lasting impact. She elaborated on the role writing has on people understanding their own emotional states, saying it pushed her to challenge her perspective on life.

“Seeing the good in the bad and being able to make something beautiful out of it is really cool,” Bishop said.

The second half of the performance featured an excerpt from “Ineffable,” an independent project created by Haktan Ceylan, a senior philosophy and political science double major. “Ineffable,” is a blend of unconventional poetry, graphics and music curated under Ceylan’s pen name Natkah Nalyec.

Ceylan announced the project in August 2021, but it has been brewing for over two years. Largely inspired by his transition from childhood to college, he touches on family issues, love and heartbreak.

Written in a pivotal period of his life, Ceylan said that “Ineffable” helped him overcome personal struggles.

“I think that there was a certain liberation that came with the art, and I’m forever grateful for what that was able to do for me then in terms of my mental health,” Ceylan said.

While each piece carries private undertones, he is excited to see how the audience relates to his work and embodies it as their own when the final project is released on Dec. 24.

“The beauty of ‘Ineffable’ is that there’s something for everybody,” Ceylan said. “This is no longer my project, this is yours.”

Audience inclusion was a major component of his performance as he often called for interaction like waving hands to the beat of the music and utilizing flashlights to set the mood.

Following the success of its first in-person event since the pandemic, Montage plans to continue driving creativity
with monthly open mics going forward. Anderson hopes they will increase involvement in the club.

Montage has been on campus for 40 years, commonly recognized for its open mics. They were previously hosted by Ken Cormier, the Montage faculty advisor, until he passed the baton to student leaders six years ago. He is pleased with the effort and participation of club members at the open mic.

“I’m really glad to see the students caring enough about it to take it on for a few years now themselves and keep sustaining it,” Cormier said.

Although primarily writing-based, students of all majors and talents can participate in Montage. The club involves many music, painting, sculpting, photography and graphic design opportunities.

“It’s not just about our members or the people who are interested in montage, but it’s also about everybody who has artistic abilities, who have something they want to share with the community,” Anderson said.

“Any college experience deserves and really requires a kind of artistic element to it, and Montage is one of those places where students can find a creative community,” Cormier said.