A tale of three sisters 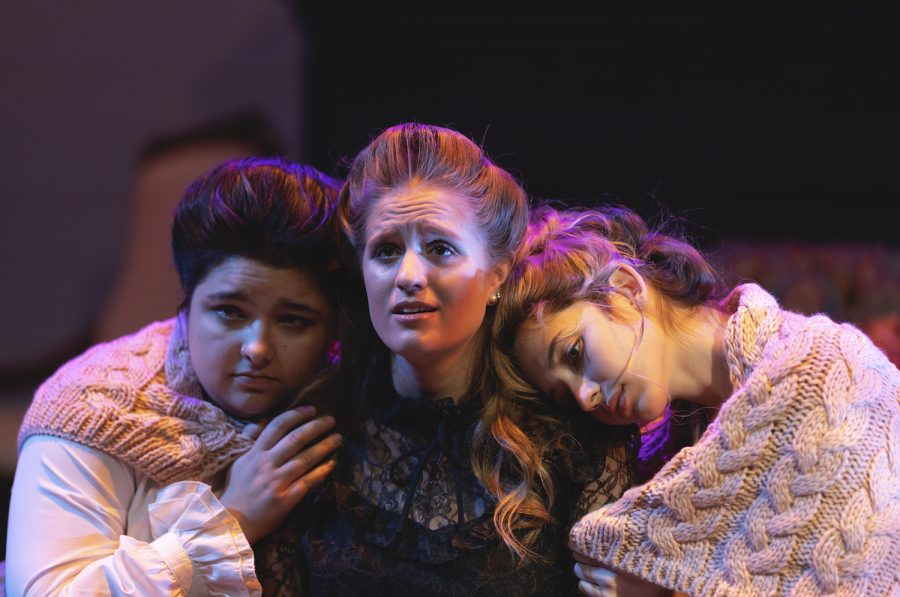 Three sisters fantasize of a better life ahead of their small Russian community. Crandall Yopp/Quinnipiac University

As college students, we are taking the next big step in building a new and improved future for ourselves. Aside from not owing thousands in student loans, the women portrayed in “Three Sisters” share a similar mindset and yearn to be free of their unhappy lives.

“Three Sisters” is the first production with a live audience since the theater department performed “Rage” in February 2020.

It’s the year 1900 and the production stars — you guessed it — three sisters. They are all greatly dissatisfied with their lives in their small Russian town. Their parents died, and now the sisters all live together in a big estate with their brother, Andrei, played by Dean DeMarino, a freshman computer science major.

“It’s really about family and growth and relationships,” said SamanthaHart, a junior film, television and media arts major who plays the youngest sister. “It’s super realistic on how they sort of grow together over the years … we get really personal with each character and we see their hopes and dreams and just the progression of their life in comparison to what they want it to be.”

All of the actors in “Three Sisters” did a phenomenal job bringing their complex characters to life on stage. Each character was fully realized and played an important role in telling the story. The casting was so immaculate that if a movie adaptation were made of this production, I could easily see every one of the actors taking their roles to the big screen. The emotion and drive of every performer were evident.

The sisters’ bond on and offstage was also barefaced throughout the whole of the performance.

Olga, portrayed by Kayla Jarry, a senior theater major in the elementary 4 +1 masters in education program, plays the oldest sister out of the three leading ladies and acts like a mother figure to her two younger siblings. Masha, portrayed by Sarah Brown, a junior biology major, is the self-serving, musically inclined and hostile middle child who is aware of her needs as a woman cemented in a deteriorating marriage and is not afraid to act on them.

“Masha definitely has a case of middle-child syndrome,” Brown said.

Irina, portrayed by Hart, is severely optimistic, spoiled and has the strongest desire to move back to Moscow. However, it’s unclear as to why moving to the big city is unachievable especially if you consider the family’s seemingly large wealth.

As one could imagine, developing each of these roles was not an effortless process, even though the actors made it appear that way on stage.

“(Preparing for the show has) been so intense, but I think spending so much time with each other has really created such a bond with the cast,” Hart said.

The period drama deals with the themes of dissatisfaction and the unachievable desire for happiness.

Brown’s character married her husband Kulygin, portrayed by Alice Maho, a junior theater major, when she was only 18 years old. Brown said he “was just kind of the best that their small town had to offer.”

Now in her mid-20s, she has grown out of her love for her spouse, which drives her to have a not-so-secret affair with the new commanding officer of the army, Vershinin, played by Bash Sarkar, a sophomore finance major. Vershinin worked alongside the sisters’ father in Moscow before he passed and knew the girls when they were little. If this couldn’t become more complicated, Vershinin is also still married.

By the end of the play, the affair is aborted when Vershinin has to leave with his military unit. Masha is now forever cemented in her loveless marriage with Kulygin.

Aside from moving to Moscow, Irina also desperately wants to work, despite her upper-class status, as she believes it will provide her with true happiness and fulfillment in her dull life.

It’s unclear where she got this nonsensical idea from, but I digress.

When Irina faces the reality of her first work experience at a telegraph office, she expresses that she’s exhausted and miserable. However, she still believes fulfillment lies in the occupational field so by the end of act three, she earns her teaching license.

Irina also has a longing to find love in Moscow. Since making the move to Moscow is inconceivable, she settles for Lt. Baron Tuzenbach, played by Billy Schillinger, a senior film, television and media arts major, who, like Kulygin once was for Masha, is seemingly her best option in her small town.

Tuzenbach eventually convinces Irina to marry him. When she is finally content with where her life is heading, her fiance is killed in a duel with Capt. Solyony, played by Skye McCashion, a junior game design and development major, the day before the wedding. Like the rest of the characters, Irina’s story ends with a void in her life that was never fulfilled.

Olga also seems to be in a constant state of disappointment. She’s a high school teacher that’s continuously working and attending to the needs of her family and small town rather than her own. Olga is in her late 30s at the start of the play and feels as if it’s too late for her to be satisfied. This is evident in her lack of desire for a relationship and accepting the role as headmistress despite originally being opposed to the promotion.

Though Olga feels as if it’s inappropriate for her to want to achieve a more fulfilling lifestyle, unlike her sisters, she doesn’t harp on this realization but rather encourages her sisters to obtain their dreams.

With the internal negative impression the pandemic has cemented on society and the natural struggles of being a stressed college student, most of us can relate to the sisters’ ache for a fresh start, happiness and the eagerness for a better future.

This production was so much more than just a play for the cast. It was a bonding experience that will carry on beyond the black box theater.

Hart has only ever performed in musical productions, and her role in “Three Sisters” marks her first time back on the stage since she was 14 years old. After Hart transferred to Quinnipiac from the University of Hartford this year, she thought it would be a good idea to partake in a theater production as she wanted to be involved and meet new people right away.

“I have met some of my best friends from this play,” Hart said. “It’s just been such an overwhelming emotional experience. I’m so grateful for it.”

This production marks a lot of firsts for not only the performers, but the theater program as well. For one, the performance dates were extended from the usual one weekend to two to allow more people to find the time to see the production.

Every actor was vaccinated and tested for COVID-19 on a regular basis, and all performance attendees were required to wear masks and have proof that they were vaccinated upon entry.

Brown said the in-person experience is crucial as it creates a more impactful performance for both the viewers and the actors. “You feed off of each other’s energy, not only with the people you’re on stage with, but the people that are also watching offstage,” Brown said. “And I think you don’t get those genuine

connections and you don’t get to see true emotion on Zoom.” Brown was in Quinnipiac’s production of “Macbeth,” which streamed entirely online in April of this year. Brown said “it was honestly such a different experience from this show.” The actors had to wear masks and perform in front of a virtual audience.

Roughly two weeks before opening weekend, the performers thought they would have to carry out the “Three Sisters” production also wearing masks. Luckily for them, since all of the performers were fully vaccinated they were able to execute the play not only with a live audience, but also mask-free.

“It was an entirely new show when we finally got to see each other’s faces for the first time,” Hart said. “It was almost like starting over, like we had like this whole clean slate to work with. It was amazing.”

Even for the most experienced of actors, performing in front of a live audience can be an anxious ordeal especially when our lives have adjusted to being completely online for so long.

“I do get nervous,” Jarry said. “One of my older friends in high school once said to me ‘it’s good to be nervous because if you’re nervous, then that means you care. It was especially spooky being in front of a live audience after not for over a year.”

If any of the performers were skittish, it definitely didn’t show in their performance.

This play is the first production I’ve seen at Quinnipiac and unlike the three sisters, I couldn’t be more satisfied. Aside from the unbelievable acting across the board, the costuming and set design was extremely impressive and immersed you into their world. Though the play was a little on the lengthy side with its run time of about three hours, I definitely plan on seeing another production in the near future.