Field hockey farewells: Seniors reflect on their careers after their final game in the blue and gold 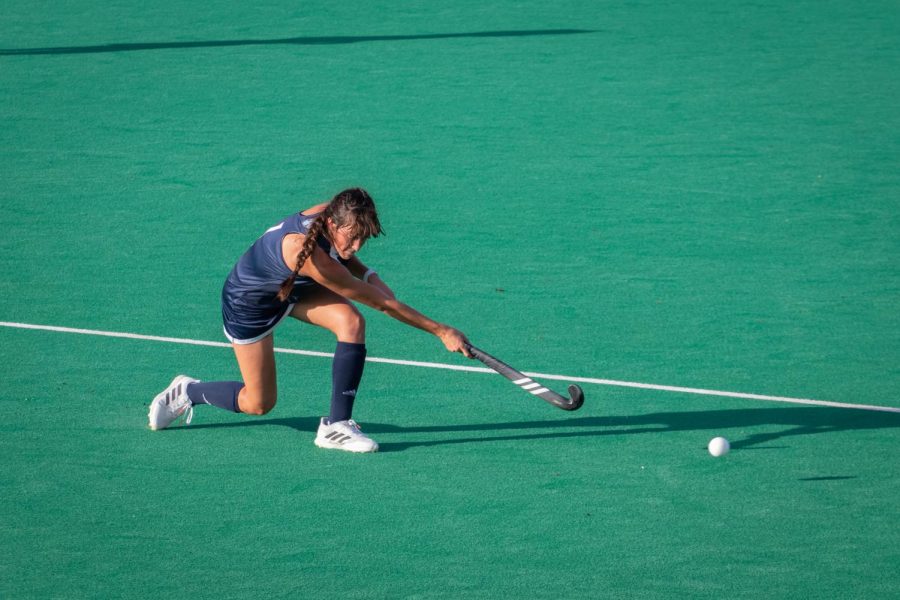 Senior defender Amanda Funaro was one of eight seniors who contributed to the team's 3-0 win over Sacred Heart on Senior Day.

“These four years are going to fly by.”

Every freshman hears it and doesn’t believe it until they’re receiving their diploma. For the eight senior Quinnipiac field hockey players, those college years have flown by, leaving just memories and friendships.

“This group has definitely left their mark on the team as far as chemistry-changing and culture-changing,” Quinnipiac head coach Becca Main said.

Main used nature as an analogy to describe the culture left behind by this senior class.

“You think about a redwood forest and how redwood trees are the largest masses in the world, but it’s because of their interconnectedness underground,” Main said. “… This group’s big thing from the moment they stepped on the field for the first time this season was to make sure that there was a connection between everyone on the team.”

Reminiscing on all that’s happened over the past four years, there is one particular time period that Main said she’ll remember when thinking about this class.

“This past February when we learned there was going to be a field hockey season, we didn’t have anywhere to practice,” Main said. “So Brooke, Mikayla, and the rest of the seniors got everyone together and they shoveled (snow) off the field so we could practice.”

While the team was practicing in slush and ice, Main was proud to see the seniors taking charge without any guidance from the coaching staff.

Although this class played half of its collegiate career during a pandemic, Main says you wouldn’t have known it with how the team conducted themselves.

“No one made a big deal of it,” Main said. “They treated it like a regular field hockey season. I don’t think they’ll realize the amount of adversity they played through until four or five years down the road.”

When asked about what they would miss most about the team, Whipkey, Dugan and Sinibaldi all had the same one-word answer: “family.”

“This team has been my second family,” Whipkey said. “We look after each other, we pick each other up when we’re feeling down, we always push each other to be better.”

Sinibaldi, unfortunately, had limited playing time her senior year as she battled injury, but she was able to get a few shifts in during the team’s game against Sacred Heart. Dugan knew what Sinibaldi was going through mentally as she had been bench-ridden all of last season.

“It stinks to have to sit on the bench,” Dugan said. “But just because you’re on the bench doesn’t make you any less a part of the team. Izzy was always cheering us on.”

The group says other Big East teams should watch out for the Bobcats in the coming seasons.

“I’m very confident in this team’s future,” Sinibaldi said. “This junior class has a lot of strong leaders coming up and just in general we have talent across the board. I really wish I could stay for another season.”

Sinibaldi continued by saying the player teams should be most afraid of going forward is freshman forward Emilia Massarelli who led the team in goals (10), points (22), and shots on goal (26) this season.

“I know they’re going to do great things, and I wish them all the best,” Main said. “If they happen to be in the area, they’re more than welcome to pay us a visit.”