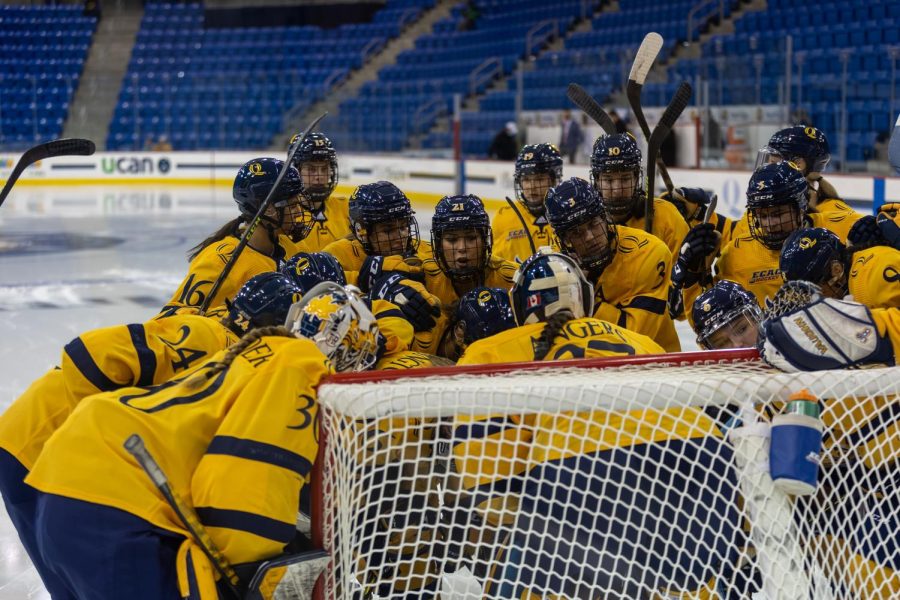 Another game, another win for the Quinnipiac women’s ice hockey team, as it wraps up the weekend with a 1-0 victory over RPI.

The opening minutes set a false narrative for the period, as the Engineers established meaningful zone time on several occasions. That would be the first and last time they would do so in the opening 20 minutes.

The Bobcats, now 10-0-2 on the season with the win, found their mojo a couple of shifts into the game, and just kept on rolling from there on out.

RPI junior goaltender Amanda Rampado was forced to make some big saves early to keep her team in the game. Point-blank chances on the left side from senior centerman Lexie Adzija and graduate student defenseman Olivia Konigson showed promise, but both were stonewalled by the Stoney Creek, Ontario native.

Several consecutive point shots from junior defenseman Kate Reilly were also stopped by Rampado, but she couldn’t keep the puck out of the net forever.

Breaking into the zone down the right wing with under five minutes to play in the period, junior winger Nina Steigauf chipped the puck between the legs of the oncoming defender and fed graduate student Renee Saltness, who was cutting down the left side. Saltness picked the puck off her skate and fired a shot that rebounded off the pads of Rampado into the low slot, where graduate student centerman Taylor House buried it.

“I was just trying to get back up into the play, ” House said. “I just trusted that they’d try to get a chance on net, and luckily they did, and I was just hoping to be in the right spot for a rebound.”

That was House’s sixth goal of the season, and her fifth in the past six games.

“I’m just trying to do the little things,” House said. “(Coach) Cass will probably laugh if I say this, but going to the net with my stick on the ice … honestly I think that’s just the biggest thing for me.”

After being outshot 13-1 in the first period, RPI came out strong in the second with a little more urgency. The Engineers forced turnovers and worked the puck well up the ice, but once again, when they got into the offensive zone, they could do little more than throw the puck back and forth from the half wall to the point.

Rensselaer did outshoot the Bobcats 7-5 in the second, but none of those shots came close to beating graduate student goaltender Corinne Schroeder, who posted 16 saves in the shutout win, her second of the season.

“Having great goaltending is just such a key element, has been for our program for years and years,” Quinnipiac head coach Cass Turner said. “It’s something that has been important for us, we’ve relied on.”

The best chance of the period came off the stick of Bobcats’ leading point scorer and junior winger Sadie Peart, whose backhand shot couldn’t get through the five-hole of Rampado.

Saturday’s game marked the second night in a row that Quinnipiac earned a one-goal victory over a sub-.500  ECAC opponent, as RPI was 4-7 on the year coming into the contest.

“ECAC is the strongest league in the country,” Turner said. “The depth of our league is outstanding … you can step into the building any day, and anyone can win.”

Desperate to knot the game at one, the Engineers started playing more recklessly as the third period got underway. With one player already in the penalty box, senior defenseman Delaney Weiss dangerously boarded Bobcats’ freshman winger Ann-Frédérik Naud at the half wall.

Weiss received a game misconduct for her actions as Naud left the ice with the help of a trainer nursing an apparent leg injury.

Quinnipiac had nearly four minutes of five-on-three play during Weiss’ five-minute major, but failed to convert, finishing the night 0-4 on the power play, something that Turner says can be attributed to the hit on Naud.

“I don’t think our team liked what happened before that with those penalties,” Turner said. “I think that got the best of us. I think if you lined us up five-on-three any other time, I think we’ll create better chances.”

RPI generated its best chances of the night after killing off those penalties, but it still wasn’t enough to beat Schroeder and company, as the Bobcats’ defense held strong for the win to close out their two-game homestand.

Quinnipiac is back in action next Friday for the first game in a home-and-home with a Princeton squad ranked No. 10 in USA Today’s latest poll. When was the last time these two teams faced off? The 2019-20 ECAC quarterfinals, where the Tigers advanced with a 2-1 series win.